The Netflix arm of the Marvel Cinematic Universe continues to get ever-closer to the fabled Defenders show, but sadly hits its first major stumbling block right before the finish line. Iron Fist is okay, but in a series that has had more “amazing” than even “very good”, it sticks out like a sore thumb. Let’s take a more detailed look at the series as a whole…

Danny Rand returns to New York City, after being presumed dead for 15 years, to reclaim his family company from Harold Meachum and his children Ward Meachum and Joy Meachum. When a threat emerges, Rand must choose between his family’s legacy and his duties as the Iron Fist.

“What do you mean I watch too much Arrow? I’m back from many years presumed dead as a fighting machine wanting to take my family’s company back, I don’t understand…”

Danny Rand / Iron Fist (Finn Jones) – When his plane crashed, this rich boy had to learn how to fight in order to survive and has come back to reclaim his old life and stuff. He’s also the Iron Fist, meaning his fist glows yellow and he can punch really hard.

Colleen Wing (Jessica Henwick) – Colleen runs a dojo in New York that doubles as a recruiting spot for The Hand, but not the same Hand that kills and deals drugs, though as it turns out, not much better. Still, she sticks by Danny when they have a chance meeting, and is a fine swordsman. (swordswoman? Is that a word?)

Harold Meachum (David Wenham) – Believed to be dead via cancer, he’s actually running his business through his son from a penthouse and under the guard of The Hand, who pressure him to make business decisions they want. A ruthless businessman made even more crazy by his death and the process of coming back from it… then later crazier still when it happens again.

Ward Meachum (Tom Pelphrey) – The son of Harold and the childhood not-really-friend of Danny. He’s a arrogant knob who’s made even knobbier by the pressure of having to run a big company like Rand Industries and hide the fact that his father is a reanimated arse who’s actually running things. He’s not thrilled with the return of Danny and it begins a long downward spiral for him.

Joy Meachum (Jessica Stroup) – The daughter of Harold, sister of Ward and childhood friend of Danny. Although initially happy with Danny’s return from presumed death, she soon values Rand Industries over Danny’s attempts to run it legit and in a pleasant way. She eventually finds out that her father is actually back alive and probably regrets finding that out by the end of the series…

Davos (Sacha Dhawan) – Ally of Danny from the crazy magical monastery that took Mr. Rand in when he was a boy. He desperately wanted to be Iron Fist and resented Danny’s success, even more so when he ignored his sacred duty to run off to New York and have a poke around. If this actually gets a second season then he’s fated to fall even further and become Steel Serpent.

Claire Temple (Rosario Dawson) – The former Hell’s Kitchen nurse that has coincidentally turned up in Daredevil, Jessica Jones and Luke Cage, as well as presumably the Defenders cross-over. She’s looking to learn self-defence, unsurprisingly given what she’s been through already…

Plus many more! Hooray?! 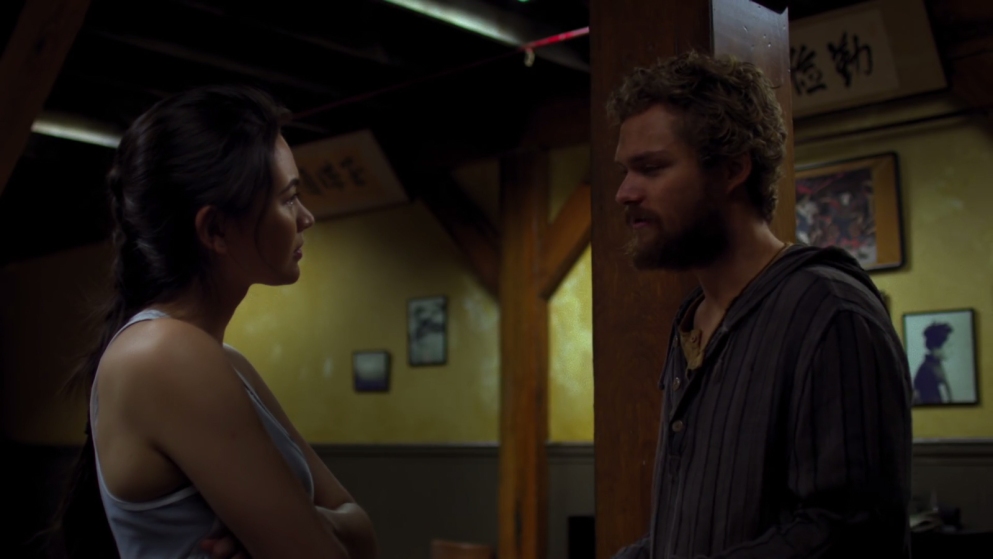 “Teach me the ways of … being interesting. Please. Thanks.”

While I’ll get to Mr. Rand in the next section, I will say that Colleen and Davos are really well played, both play off the other cast members well and comes across as interesting. Claire is once again funny and warm and also plays off of everyone. Ward and Joy are interesting in that you go from hating them, to liking them, and back to hating, and so on. They end up being very human, which is great and different from your usual arrogant CEO-types you normally get.

Harold Rand is a great, occasionally sympathetic, lead villain. He gets equal time of being a corporate bastard and a caring father who has to view his beloved daughter from a far to keep her safe from his own mistakes. Much like Kingpin, don’t get me wrong, he’s irredeemable and definitely a villain, but at least he feels realistic.

Wai Ching Ho returns as Hand member Gao, which is good as she was both a fun “evil leader” and it means all the set up that was done in Daredevil Season 1 wasn’t a waste.

For what it’s worth there are some good fight scenes here and there, even if they aren’t as good as Daredevil’s. The fight between Iron Fist and the Drunken Master was great fun.

“Oh God… now I’m going to have to wash the carpet again.”

Danny Rand himself is just plain dull. It’s funny that Iron Fist and Green Arrow’s backstories match up because Finn Jones reminds me a lot of Stephen Amell from Arrow. Both are stoic and sometimes wooden, and rely entirely on the supporting cast to reflect back on them the good parts of the characters they play. The difference is that Danny Rand doesn’t have the same time to develop here, and instead is bounced around the city (and the world!) and the other characters evolve and bounce off each other, but Danny stays stoic and uninteresting.

Probably the biggest problem is that the show is called Iron Fist, yet this had the least amount of action out of the four shows and five seasons of Netlflix MCU so far. It baffles me that more time was spent on boardroom politics rather than elaborate martial arts fights given the subject matter.

Due to the lack of action this show does drag, the story would have fitted an 8 part story rather than 13. There is an episode where Danny, Colleen and Claire go to China that’s all done in one episode. They’re in New York, then on a plane for a convo, then in China (that looks like a US warehouse with Chinese signs plastered on it), then at the start of the next episode they’re back in America with a hostage from China. It didn’t feel right at all. With all the extra time they could have stretched that out a bit and cut some of the more boring US-based stuff.

The intro, it has to be said, is awful. The music goes nowhere and the visuals are dull. It doesn’t set the mood like the other shows, it kills it dead.

Cool glowing fist action! Shame it doesn’t get used much…

As a big fan of the MCU and its many arms, the Netflix shows are even more dear to me as I love Daredevil and was thrilled to see The Punisher get his best live-action showing yet. That’s why after three amazing seasons and a very good Luke Cage season it was disappointing to see this fall into the average category. Sure, it could have been flat out bad and luckily most of the cast is great and play off each other well, it’s just the central character is rather dull and the series as a whole seem devoid of much martial arts action… which for Iron Fist is a bit, well, weird. Let’s hope in The Defenders the stars of the other three series can cover for Mr. Rand, or let’s hope that he’s written and directed better…