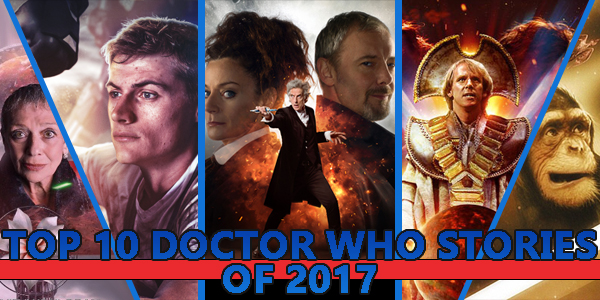 Here’s a more unique Top 10 at least! My choice of Top 10 Doctor Who stories (of any medium, though I have fallen behind on the comics, so… sorry comic creators!) released in 2017. Let’s get to it, because you just can’t have enough Top 10s on New Year’s Eve!

Oxygen, Episode 5 of Series 10, has a lot going for it. It had a proper sci-fi feel, some fun “baddies” in the form of what is pretty much killer space suits but presented more as space zombies, and was generally full of some great scenes and some genuine tension. I think I just really enjoyed the classic sci-fi feel to the story, which is why it took #10 over the previous week’s episode, Knock Knock, which was an equally strong effort but in a different genre. If didn’t have such a heavy-handed anti-capitalist message it’d probably rank higher… (Full review can be found HERE )

Peter Capaldi’s swansong, Twice Upon a Time serves its purpose well: give a fitting send off to Doctor number twelve. It wasn’t flawless (mostly due to the weird handling of the First Doctor…) but it had some great moments, particularly the idea that The Doctor has gone past his natural life and is wondering why he doesn’t get to rest like everyone else. The actual regeneration was great as well, which is what you want from a regeneration story (and boy, I should know after that long Regeneration Marathon I did leading up to it!)  … (Full review can be found HERE)

Static was the December release in the Main Range of Doctor Who Audio Dramas and managed to become one of the best straight out of the gate. Creepy atmosphere, good use of horror clinches at the start, great use of interesting sci-fi concepts in the second half of the story, and some good twists and turns. If it weren’t for a certain character being extremely annoying (that wasn’t Flip, for the record!) then this would probably rank higher… (Full review can be found HERE)

It’s a relief that one of the Fourth Doctor Adventures stories can make it onto the list, as normally they’re very hit and miss, and even more rarely anything beyond just “good”. Dethras managed to take some pretty out-there ideas and concepts and not only make them work, but make you like the newly introduced characters enough to be interested in what’ll happen to them by the end, something so many of these one-hour stories get wrong. Don’t want to say anything more so as to not spoil it, but it’s worth the price, that’s for sure! (Full review can be found HERE)

The last Doctor Who review on the site for 2017 (and in fact the last review period for the year) ended up knocking it out of the park, to use an American expression for some reason. Packed full of great characters, brilliantly written dialogue and fun concepts, The Wreck of the World proves there is still life in the “Early Adventures” range. Annoying robot aside, I can’t (and couldn’t a few days ago) really find a fault in it, though it might be slow paced for some… maybe. Otherwise, buy it now! (Full review can be found HERE)

This was a hard one, because I did have some pretty harsh criticisms on this two parter, particularly with the exit of companion Bill, but there was just so many great scenes between The Doctor and the two Masters, not to mention the re-use of the Mondasian Cybermen, that I just loved it, and would happily watch it again. Seriously, the scene with the two Master confronting each other towards the end was so much fun I want to watch it again right now (boy that was hard to write about without spoiling it!) (Full review can be found HERE)

Given I split these four-story boxsets into two, I thought I may as well treat them as such. The latter two stories in this set are great, with a really interesting look at The Doctor being forced into a military bootcamp in “The Conscript” and a great pay off to a hinted at plot element in “One Life”, which manages to use a New Series concept out of nowhere, but really well. I do also have to mention how much I loved the first part of this set, which set up the Time War as a wave of perception and memory alteration so well that it really made me think about it in a new light. You can’t buy these individually, so I can’t recommend the box enough, overall! (Full review of these two parts can be found HERE)

The Star Men, which was actually released back in January, still sticks in my head for how greatly it handled a rather epic scope. The story really embraces some great sci-fi elements like body possession, large space stations and interstellar travel and yet manages not to be hard to follow or over-bloated. By episode 4 the Doctor and his companions have travelled across space and even universes, fighting a really fun new alien race. Can’t ask much more than that! (Full review can be found HERE)

That’s two Fifth Doctor Main Range audio dramas in the row! Time in Office is more of an anthology release than one story, though it does follow the Doctor being forced to actually act as the President of Gallifrey and some of the things he has to deal with, and then ends with him leaving the post again. It involved Tegan and Leela, and both are given plenty to do, and in general I think what I loved about this release was it got the humour spot-on. It literally made me laugh several times, while at the same time telling some great stories. How often does that get pulled off successfully at all, let alone in Doctor Who? Not often, that’s for sure… (Full review can be found HERE)

The third audio to be released in December to appear on this list, I had to give the top spot to this, mostly based on “The Sky Man” alone. It’s a story that doesn’t feature the Doctor, it barely features The Master, but it features a great and sympathetic lead and a genuinely interesting story that keeps getting darker and darker until it hits you as to what’s going on, and then a huge smile breaks across you face as you realise. Throw in “The Heavenly Paradigm”, which manages to be a fun Master story that ties perfectly into the TV series, and this is a hell of a double punch. So there you go, my #1 Doctor Who story this year doesn’t feature The Doctor… weird! (Full review can be found HERE)