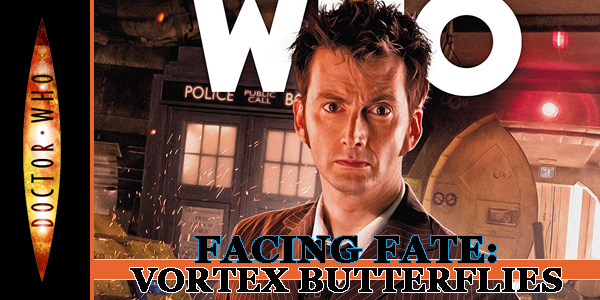 We’re nearly at the end of the Titan Comics 10th Doctor stories with Vortex Butterflies. It finally deals head-on with the weird powers Gabby has been showing for some time now, while also having a role for Sarah Jane Smith and managing to throw in more companion name drops than you can shake a stick at. Let’s take a look!

The Doctor has abandoned his crew to chase a mysterious message into deep space! As Cindy recovers from the splitting headache she developed on her most recent adventure, Gabby’s mysterious block-transfer butterfly powers evolve even further. But will the team ever be reunited? And what secrets will the Doctor find waiting for him, out in the cosmic dark?

“I wonder if he thinks about us when we’re not around?” … Nah.

The main part of this story is focusing on The Doctor and his relationship with Gabby, and how a sequence of events over the course of these comics (like the Block Transfer Matrix and Osiran Medical Nanobots) are the reason she developed her powers. Both Gabby and The Doctor are being stalked by a fissure in the sky that looks a hell of a lot like the Third Doctor title sequence, the fissure eventually revealing that it’s a future form of Gabby after The Doctor left her behind with her condition. The Doctor’s guilt is only beaten back by his realisation that since it hasn’t happened in his timeline yet then he can change it, and soon he reunites with his Gabby (who he had, erm… left behind) and the two fight the future Gabby / time fissure back and defeat it. It was a really good little story, with lots of references to companions The Doctor had left behind (see the Continuity section!) and generally gave a feeling of the story of Gabby coming full circle.

Gabby (and Cindy, who after being the central focus of the previous volume is now very much in the background) are left behind on Earth and end up meeting Sarah Jane, who helps them come to terms with The Doctor’s ways of leaving companions behind, but how it isn’t due to any malice or anything. It’s a similar role to her original TV return, but it was still fun to see.

Speaking of cameos there was a scene where The Twelfth Doctor arrives and gives his past self a bit of a lecture. It was fun, with the “current” Doctor assuming he’s talking to his final incarnation, the Doctor 12 talking down to him, especially calling him “Bambi”. I mean, wholly unnecessary, but fun. 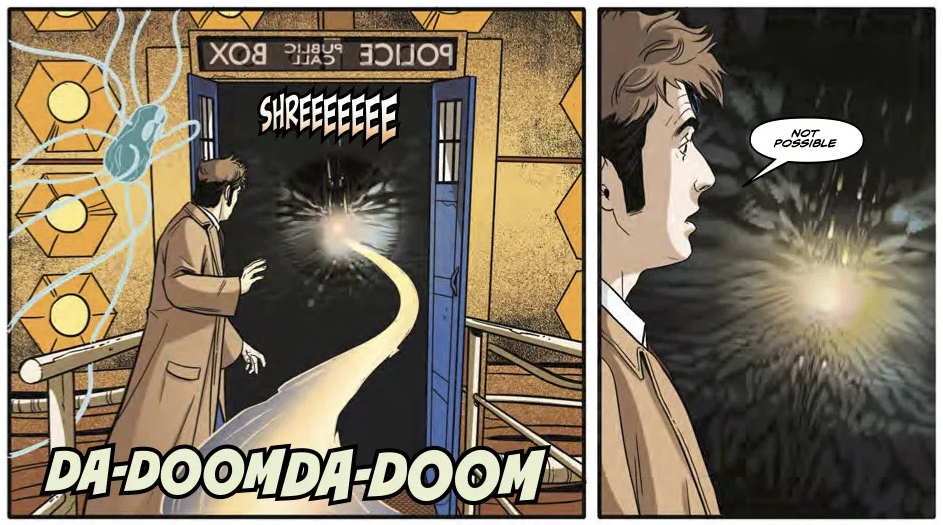 That floating thing is some sort of sentient A.I. robot The Doctor picks up. It’s not important.

Noobis, the “teenage” reincarnation of Anubis, is dropped off on a large library planet early in the story and pretty much hand-waved away, with the exception of a few scenes of the Osiran being an awkward teenager with a girl he meets. It’s a bit odd, but at the same time I’m not the biggest fan of the character, so no harm done in my eyes, it just could have been handled a little better than one or two panels in the middle of a “their adventures continue” montage, followed by some not-all-that-amusing attempts at comedy…

A great moment, somewhat ruined by Sarah Jane having blonde hair, for some reason…

Sarah Jane’s physical appearance as well as a lot of the story beats are all very similar to her TV return in the Tenth Doctor story “School Reunion”.

There’s a montage of past companions (part of which you can see above!) that includes more obvious characters like Donna and Adric, but also includes Lucie Miller and Liv from the Big Finish audios, Izzy from the DWM comics, and even Fitz from the Eighth Doctor books is mentioned, making this the first time all four mediums of Doctor Who (TV, Audio, Comics and Books) have come together in one place.

Beyond picking up right after the end of the previous story and leading directly into the next via a cliffhanger, that’s it really. There were a few little mentions here and there (especially with Sarah and Cindy swapping stories) but nothing major. 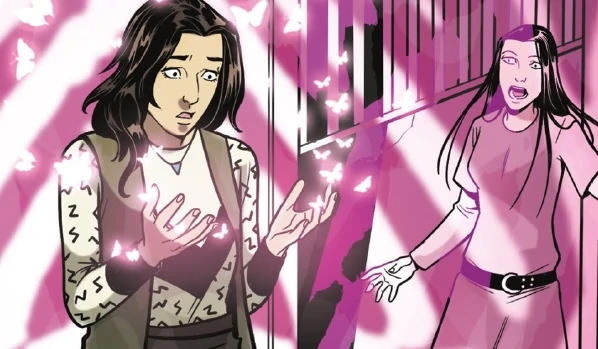 Vortex Butterflies is a nice look at the relationship between The Doctor and Gabby, as well as another look at how The Doctor’s lifestyle doesn’t always lead to happy endings. To be honest, ignoring the cliffhanger they used, there doesn’t really feel like anywhere else to go with the characters now, other than telling us where they went given they obviously didn’t appear in the TV show!