I wrote these Star Wars reviews in the lead up to Episode VII back in December last year, but never got around to posting them anywhere… Until now! Anyway, the task of marathoning the first six meant having to watch this… What else is there left to say about The Phantom Menace? Well…

Turmoil has engulfed the Galactic Republic. The taxation of trade routes to outlying star systems is in dispute. Hoping to resolve the matter with a blockade of deadly battleships, the greedy Trade Federation has stopped all shipping to the small planet of Naboo.

While the Congress of the Republic endlessly debates this alarming chain of events, the Supreme Chancellor has secretly dispatched two Jedi Knights, the guardians of peace and justice in the galaxy, to settle the conflict….

I was going to put a funny quote here, but the look on everyone’s faces says it all really…

Qui-Gon Jinn (Liam Neeson) – Laidback, hippy-esque Jedi who is both the teacher of Obi-Wan and the reason, eventually, that everything goes a bit shit in a few years time…

Obi-Wan Kenobi (Ewan McGregor) – Young Jedi-in-training, Obi-Wan is ready for the trials to become master, which is good due to what happens to his Master during the course of the film…

Anakin Skywalker (Jake Lloyd) – A little boy who was born via … mediclorians or something. He’s obnoxious in the “not his fault due to his age, but I’m still pretty sure they could have found a better child actor” kind of way.

Padmé Amidala (Natalie Portman) – Young Queen of Naboo who gets into trouble when her planet in targeted by the evil Trade Federation and their taxation… stuff. Oh and lightsaber wielding Siths, but that’s not until later…

Senator Palpatine / Darth Sidious (Iam McDiarmid) – Kindly old politician by day, evil lord of the Sith by night. Or sometimes during the day too, depending on the evilness that needs to be done that day…

Darth Maul (Ray Park / Peter Serafinowicz) – Sith who looks so evil he couldn’t even remotely blend into a crowd without suspicion. It’s no wonder he turned to the darkside… he probably looked in the mirror and went “Oh well… may as well!”

Jar Jar Binks (Ahmed Best) – He’s…. annoying as all hell… but I’m sure you know that already…

“I promise that, if elected, I will kill you all using my Sith powers… I mean, help you all with politics! Sorry, I get those confused sometimes…”

It’s safe to say “not a lot”, but there are some good points. Ewan McGregor is a good young Obi-wan and Liam Neeson impresses throughout as Qui-Gon Jinn. Ian McDiarmid is also great as both the nice politician (if there is such a thing) and as the cheesy super evil Emperor, though admittedly he doesn’t get much of a chance to do the latter here.

The Pod Racing scene is at least exciting and well shot, as is the lightsaber duel at the end of the film, even if it is interspersed with less appealing scenes… Oh, and despite finding the main droids really dull to look at, I do still love the Droideka design.

“Bugger, now the Emperor will shout at me again…”

Well, let’s get it out of the way then: Jar Jar Binks. Awful, and excruciatingly annoying. Goofy voice is fine in small doses, but goofy voice with somewhat racist syntax and now-badly-dated CGI in large doses is the worst. The attempts a comedy with him might make a five-year-old chuckle, but unlike most things aimed at a younger audience, will make everyone with an age in the double figures groan rather than smirk at the fun-for-children thing.

The whole legal part of the film is none too interesting either, and Queen Amadala, or Padme, is sometimes sweet, but mostly stuck up and arrogant. Even when she begs for the Gungans help, she later uses their whole army as a decoy while she takes her men behind enemy lines. Great plan… unless you’re a Gungan. Not that a scenes with loads of Jar Jars getting massacred would be a bad thing, but sadly the actual battle is fought for laughs, with one side being mostly the boring looking droids and the other being Jar Jars throwing large marbles. MARBLES.

Young Anakin suffers from the old problem of being a child actor, 90% of which can’t act well due to being a child. No shame in it, but given the role it wouldn’t of been too hard to actually find one of the good ones, surely?

The Jedi, don’t do much… at all. Though after sensing potential evil in Anakin, Yoda eventually sighs and lets him train with still-technically-not-a-Jedi-Knight Obi-wan anyway. That turns out well, doesn’t it!

Darth Maul may look intimidating, but why after perfectly counting two Jedis at once and killing the more experienced one, does he see Obi-wan fly over his head, grab Qui-gon’s lightsaber and the a couple of seconds later slice him in half without doing anything? You can literally see him standing with his arms out wide as if he’s too shocked to do anything. The phrase “Anticlimactic ending” does not do it justice.

The leader of the Gungans… why does he flap his face around like a loon? Is it a sign of nobility in their race? I’m going with… yes. 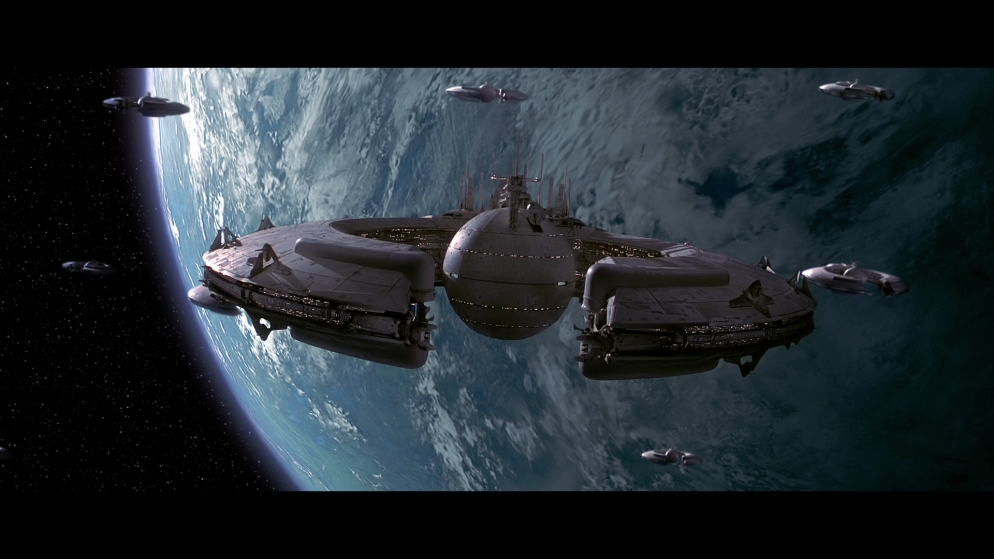 Actually, I do like the designs of those Droid control stations, I’ll give it that much.

I really didn’t want to be one of those Episode I haters, it does have SOME merit, but after watching the blu-ray for this review… man, it just grates on you how annoying it is. I’m just thankful I actually like a lot of Attack of the Clones and just plain like Revenge of the Sith (though neither rank higher than the three originals), so the worst part is over now!