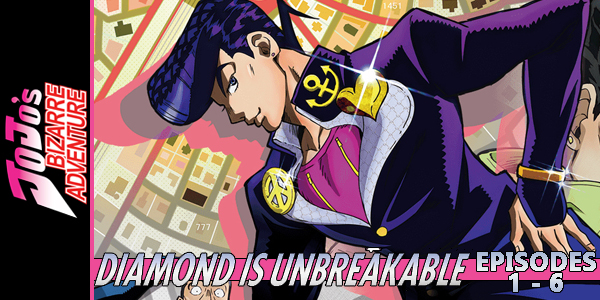 Only being previously familiar with Part III I find myself once again in the unknown of JoJo’s Bizarre Adventure, now with its fourth set of lead characters (minus the returning Jotaro, though he seemingly isn’t a frequent as the newer members of the cast). What kind of start does Diamond is Unbreakable get off to? Well, a bizarre one, funnily enough!

In April 1999, roughly ten years after his battle against Dio, Jotaro Kujo travels to the town of Morioh to look for a boy named Josuke Higashikata. After first running into a timid boy named Koichi Hirose, Jotaro comes across Josuke as he fights with some upperclassmen who injured a turtle and insulted his hairstyle, discovering that he possesses a Stand that has the power to heal wounds. Jotaro then introduces himself, revealing to Josuke that he is the illegitimate son of his grandfather, Joseph Joestar, thus technically making him Jotaro’s uncle…

Eventually they begin a hunt for someone using a bow and arrow to unlock people’s ability to use a stand, a spree that’s causing havoc for the town…

Jotaro is back! Love how even though his hat no longer matches his hair colour, they still somehow blend into each other…

Where as Part III had a clear purpose, it was a weird road trip across the globe in order to kill Dio, this series is the opposite. It’s based in a single town, and it has a bunch of stories sometimes connected to each other, but for the most part self-contained. Admittedly the first two episodes and the following three are two longer stories, but that’s simply to set up the characters, the first two introducing Josuke and reintroducing Jotaro, the next three revealing eventual ally Okuyasu and the sixth episode giving powerless friend Koichi a Stand of his own and thus developing him a bit further than the “cowardly friend” he’d been through the other five.

Speaking of the leads, Josuke is a fun central character. His flies off the handle when his hair is insulted, and his stand, Crazy Diamond (renamed Shining Diamond for the English version in fear of potential lawsuits) ability to break something, then repair it in anyway it sees fit is certainly different, and created some fun moments in the first two stories. Okuyasu is your classic blockhead punk type character and Koichi is a cowardly kid who finds courage from time to time… in other words, neither are anything new, but they work alongside the kind and brave Josuke. 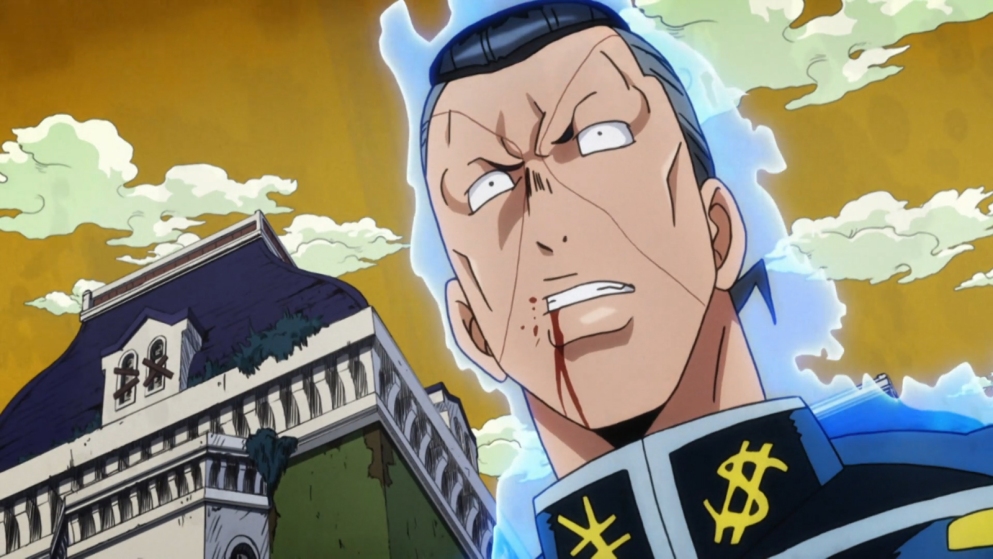 Okuyasu, complete with different symbols for money all over his attire, for some reason…

The villains are as over-the-top as usual for the franchise, the first of which ticks off the for some reason obligatory dog death that each JoJo season apparently needs to have. Okuyasu’s brother Keicho is a standout, mostly because he has a bit of tragedy to him, his father being an undying monster due to his connection with Dio, and that he’s just trying to create a stand user that can save him. Then of course, him being killed by a future bigger enemy that’s to come makes sure you want to stick around.

The opening, “Crazy Noisy Bizarre Town” by The DU, is a fun and catchy opening, and the classic JoJo old Western song for an ending theme this time is “I Want You” by Savage Garden, catchy and, much like when they used “Walk like an Egyptian”, weird to see (or hear, I guess) an ending theme to an anime that I’d heard many times before it. 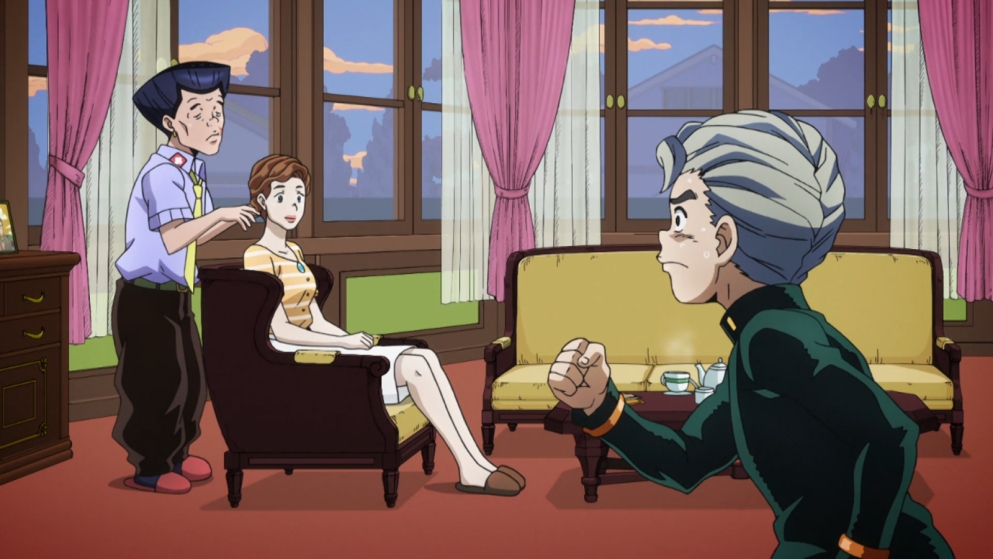 A werido you met earlier giving your mum a back rub… A valid reason to shake your fist.

The sixth episode, although it does establish Koichi as a proper character, I felt it was quite weak due to the villain of the piece being annoying and obnoxious to the point where you really want him to get his comeuppance, but he doesn’t really. He gets driven a little crazy due to sound effects and eventually apologises and starts following Koichi around as a over-eager friend. I don’t know… I guess I’m just used to these kinds of JoJo enemies to get punched in the face by a member of the Joestar family… 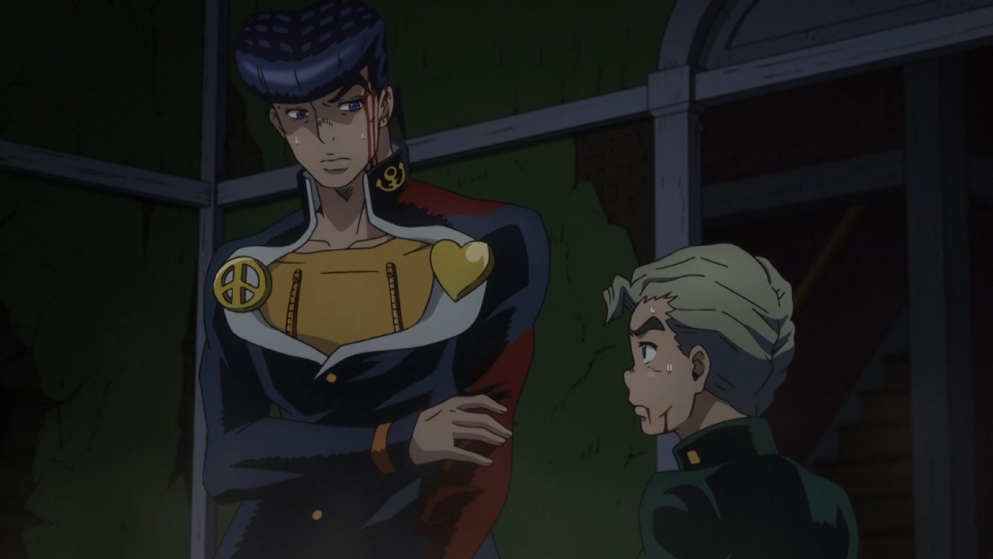 “Only five episodes in and this has already happened… How about we give up now?”

As I’m sure you can tell due to the lack of much in the Bad category that this was a strong opening six episodes. After some heavy stuff (for JoJo anyway) at the end of the last season, this was a fun start, and wasn’t without emotional weight when it needed. Looking forward to more!