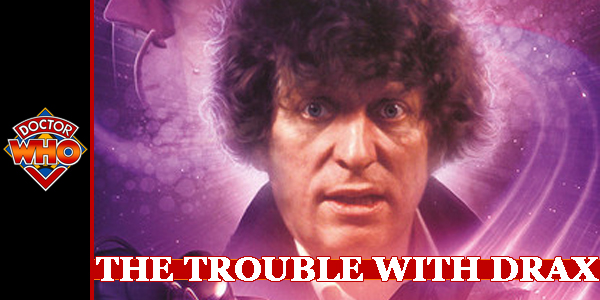 Drax? That cockney Time Lord from the boring Armageddon Factor? Why would I want to listen to a new story with him? Well, as it turns out, there was a very fun story to tell with the forgotten character…

Altrazar. The temporal Atlantis, a place lost to time. Believed by many to be a myth, it has long been the perfect location for the rich and powerful to hide away their most dangerous secrets. Until now, because the somewhat crooked, not exactly honest, wheeler-dealer cockney Time Lord known as Drax has found a map that leads to its location. And, at the behest of a manipulative businessman, he’s going to use it.

When the TARDIS is dragged out of the space-time vortex, its crew aren’t best pleased to see the Doctor’s old school friend, even less when he pressgangs them into joining a raid on the most secure safe-house in history. However with Romana and K9 held hostage, the Doctor has little choice but to agree. With Drax in tow, he heads for the planet, which is where the trouble starts…

The Doctor (Tom Baker) – Long scarf, likes jelly babies and travelling around the universe, saving people and having a laugh. Would settle for less.

Romana (Lalla Ward) – Though slightly less strict and stingy than her previous self, Romana is still more snooty observer than regular question-asking companion…

K9 (John Leeson) – Robot dog / pet of The Doctor and Romana, can be overly logical, unlike most real dogs.

Drax (Ray Brooks / John Leeson / Miranda Raison / John Challis / Hugh Fraser) – A Time Lord always up for a quick scam and not afraid to bend the rules of time in order to achieve it, Drax has managed to set up a racket made up only of incarnations of himself…

Tom Baker is on good form as The Doctor while Lalla Ward’s Romana is actually more enjoyable here, though still overly grumpy. The story is a very light-hearted affair, and they, particularly Tom, revel in the absurdity of it all.

The definite highlight of the story is its biggest twist and pretty much the whole story. The Doctor and Romana end up in the middle of a scam by Drax… and Drax… and Drax. Yes, the Time Lord is using his own past and future incarnations and their knowledge to do some scamming, and it’s hilarious as The Doctor and Romana start to figure out which people in this situation are Draxs. Then it goes even further, as in a pub afterwards, the waiter and owner turn out to be Drax, then the police officer and her guards come to arrest the Draxs ALSO turn out to be Draxs. It ends with twelve Drax incarnations flying off together, as some sort of weird criminal organisation, all having a drink and a laugh with each other. Add in the comedic old cop show theme that kept playing, and it made for a really fun story that left me with a big smile on my face.

To be honest, that’s all I can say, as it’s the whole plot, summed up. Ray Brooks (third Drax), John Leeson (fifth Drax), Miranda Raison (eighth Drax), John Challis (ninth Drax) and Hugh Fraser (twelfth Drax) were are great in their roles, its rare to get a Big Finish cast so universally praise worthy.

Why does Tom Baker look so weird? I can’t put my finger on it!

Oddly enough for a 4DA, not really anything comes to mind. A series that’s normally too short or too predictable or dull, this was anything but! There wasn’t even a duff performance in the cast…

Actually, I will mention that normally Big Finish releases the last few years have had some great cover art, but this one? A purple mess with a really weird picture of the Fourth Doctor in the middle of it. Ah well.

As mentioned, Drax first appeared in Fourth Doctor TV story “The Armageddon Factor”, and hasn’t appeared since. Something I now hope changes!

Wow, my first audio review and it’s a big hit! As I said in the “Bad” section, the Fourth Doctor Adventures range is the most hit and miss range at Big Finish, so it was refreshing to hear a story that was perfectly timed for the hour, unpredictable, funny and full of great performances. Top marks.