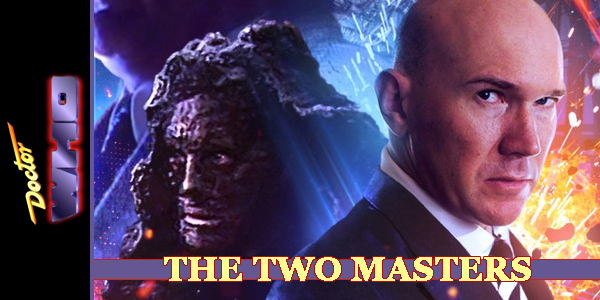 After all these years, a multi-Master story finally happens! Geoffrey Beevers’ melty-faced Master meets Alex Macqueen’s sarcastic baldy Master, with the Seventh Doctor caught in the middle. Sounds good to me!

The future is dying. All over the universe, gaps are beginning to appear. From the space lanes terrorised by the rag-tag remnants of the once-mighty Rocket Men, to the empire of the Gorlans, stricken by a terrible civil war. Gaps in space/time, portents of the end of everything.

One Doctor. Two Masters. What could possibly go wrong?

The Master (Geoffrey Beevers) – Partially melted and without the ability to regenerate, this Master is full of rage and spite, willing to do whatever it takes to gain what he needs…

The Master (Alex Macqueen) – A fresh body has put this incarnation of The Master in a permanent good mood, even when senselessly killing anyone who gets in his way! Hooray!

Jemima (Lauren Crace) – Slave to the infamous Rocket Men after they killed her parents, she wishes for a way out of her current life…

The Cult of the Heretic – Crazy religious cult who worship Time Lord rogue “The Heretic”. They wish to use the Master bending the laws of time in order to power a device that could literally re-write the universe in what ever image they wanted…

An epic looking cover for a long-awaited epic story!

So the biggest twist in this story comes from the fact that the two Masters had their minds switched, the later sarcastic and more fun Master is put back into his old painful, near death body, and likewise the younger and full of pain and anger Master suddenly found himself in a fresh, painless body. This is where I really have to applauded their performances, because they both play each other’s Masters just as well as they play their own, and they’re extremely different characters. It’s brilliant.

When the two Masters swap back into their original bodies and start interacting and eventually bickering, it’s also great. Beevers’ Master getting annoyed at Macqueen’s jokes and one liners just before he kills his foe and then the latter’s reaction to having his victim killed before he got to gloat was great. The way they talked about Jemima’s death had me actually laughing out loud “You killed one of the Doctor’s companions? I’ve always wanted to do that!” “I think she was new, so I don’t think it really counts…” Great stuff.

So what draws them all together? An old Time Lord cult called the “Cult of the Heretic” have a way to destroy the universe and then rebuild it in whatever image they see fit, so of course The Master is interested in this. In order to get his trust though, they tell him to go back into his own timestream and kill a past version of himself, that way the only way to save himself would be with the help of the cult and their machine. This leads Macqueen to pretend to kill an earlier version of himself, actually just burning him to an inch of his life. So, not only is this a multi-Master story for the first time, but it also finally explains why the Master from the Fourth Doctor TV stories looks so hideous and melted… a future version of himself did it! As Macqueen’s Master quips to himself “I couldn’t remember who did this too me… turns out it was me! Now there’s a plot twist….”

So, anyway, the Cult of the Heretic, a nice new bit of Time Lord lore, even if the members aren’t actually Time Lords.

The fact that the two Masters kill the cult and are moments away from creating a new universe where they’re the master (obviously!) is pretty shocking, worthy of a big TV finale. The Doctor only manages to stop them due to two bits of technology that each Master carelessly left in his possession, and then getting them to argue over which one of them would actually rule. Given that most of the time when two Doctors meet they end up bickering and fighting, it’s no shock that two Masters would do the same. The Doctor uses the machine to recreate the universe exactly how it was before hand, minus Jemima’s death, which kind of ruins the gag I liked earlier, but makes sense. The two Masters are thrown back to where ever they were before this happened.

Not a lot really, which is the second time in a row I’ve said that. John Dorney is a great writer, and it seems he excels at multi-Time Lord stories given this months releases!

This is technically a third story in a “trilogy” of Main Range stories, with Fifth Doctor story “And You Will Obey Me” and the Sixth Doctor’s “Vampire of the Mind”, although the way they tie into this story doesn’t really effect any of the three. You can listen to any of them without much worry of not being able to follow the overall arc, though the fact that the two Masters are actually switched during these adventures means listening to them again is great fun!

As mentioned, this finally explains how the Master went from smooth talking Roger Delgado to decaying husk Peter Pratt / Geoffrey Beevers. It even mentions leaving the burnt and barely breathing Master on Terserus and contacting Goth, leading directly into Fourth Doctor TV classic “The Deadly Assassin”. It therefore reveals that Delgado must have regenerated into another human form that looks and sounds like regular Geoffrey Beevers before being burnt, thus ending the speculation that the melty Master is Delgado.

The opening scene deals with a band of Rocket Men, the space pirates that were created for the First Doctor companion chronicle range, appearing in “The Rocket Men” and “Return of the Rocket Men”, before making the leap into full cast audio drama with Fourth Doctor story “Requiem for the Rocket Men”. The latter involves the destruction of their main base, a fact that is mentioned in this story, the band of Rocket Men here are clinging on to a now mostly forgotten name.

Well, if I had to pick a month to start covering Doctor Who full cast audio releases, I picked the right one! They went 2 for 2, though given both, coincidentally given how far back they record the Fourth Doctor stories, are written by John Dorney, it’s not that surprising. For many years people have been saying “why don’t they do a multi-Master story like they’ve done with The Doctor so many times?”. Well, I’m glad to say that they have, and thankfully, it was great. Funny, dramatic, and even some nice continuity holes filled in. Can’t ask for more than that in a release!