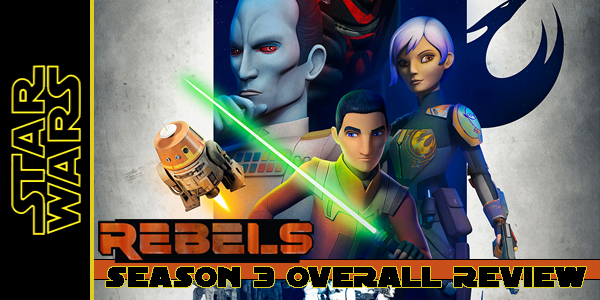 The third season of Star Wars: Rebels is in the books! We now know it is the final season next time, so does this set the table for the big end? Yes! Yes it does.

Having established a secret base on Atollon, the Ghost crew, now led by a more powerful Ezra, strengthens the rebel fleet by acquiring new resources and recruits eager to stand against the Empire. However, the Imperial efforts to eliminate the rebellion are now being led by the coldly analytical Grand Admiral Thrawn, whose strategic, tactical and cultural insights make him a threat unlike any they have faced before.

Ezra Bridger (Taylor Gray) – This season sees Ezra turn into a powerful Jedi and a strong leader, though he is still partial to burst of immaturity.

Kanan Jarrus (Freddie Prinze Jr.) – After getting blinded by Darth Maul in the previous season’s finale, Kanan is soon back to his old ways of teaching Ezra while still learning himself.

Hera Syndulla (Vanessa Marshall) – Fearless leader of her own Rebel cell, she is now seeing the Alliance come together at long last.

Sabine Wren (Tiya Sircar) – A member of the Mandalorian race, she is reluctant to contact her people given her less-than-pleasant exit and is far more happy as a Rebel…

Zeb Orrelios (Steven Blum) – Slow-witted but strong, Zeb is among the last of his race. He has a short temper, but means well…

Chopper – Comic foil droid, because you can’t have a Star Wars show without one…

Agent Kallus (David Oyelowo) – Once the Imperial officer tasked with stopping Hera and her crew, Kallus has had a change of heart since last season and is now a Rebel spy within the Imperial Empire, using the name “Fulcrum”.

“Would you like a giant jellybaby?”  “Er… is this some kind of Jedi test?”

Ezra in previous seasons was sometimes hard to like given his childish outbursts (though fair enough, he is a child and seeing him mature is a perfectly fine plot device) but I have to say he turned a corner this season, not just because he looks a bit older and has a new haircut. He’s closer to the Luke Skywalker school of learning to be a Jedi while only making the odd mistake. It’s good to see over the season.

Sabine gets a backstory at last, and it’s good. Her trouble with her own people was interesting (basically she defected from her own household rather than be under the boot of the Empire) and seeing her learn to wield the “Darksaber” and eventually gain her people’s trust was a good storyline. Her leaving the group to be with her people made sense as well, it’s just a shame she was back so quickly…

Agent Kallus, who was as one-dimensional as villains come in the first two seasons (one episode of Season 2 aside) was actually interesting this season! To see him not only turn out to be a spy, but that by the end of the season be a fleshed out person who you were really routing to escape and survive is the sign of good writing. On that note, Grand Admiral Thrawn was a fantastic lead villain, full of calm and confident charisma and his final plan pretty much works. Fingers crossed they stick to the books and have Thrawn survive the end of the Empire and then control its remnants against Luke et al. post Return of the Jedi (possibly as the next animated series?)

He’s so evil looking Darth Vader gets annoyed by him being around.

The rest of the crew were often well served, Kanan and his trials with the Bendu (a giant creature who straddles the line between light and dark… voiced by Tom Baker no less!) are great fun, Hera got a small bit of backstory in “Hera’s Heroes” and generally was the voice of reason and a good leader, and hell even Captain Rex got an episode that was entirely a homage to the Clone Wars cartoon. AP-5 is a fun addition to the series, with his dry and sarcastic stance on life as a droid.

In the “ticking the boxes” way of thinking, this season saw Wedge Antilles and Mon Mothma join the Rebel Alliance (and in the later case, FORM the Rebel Alliance) and Saw Gerrera, previously of the Clone Wars cartoon but not more known for his appearance in Rogue One.

Episode of the season has to got to Episode 20, “Twin Suns”, which sees closer to A New Hope than the Clone Wars Obi-Wan Kenobi face off and finally kill Darth Maul.

Zeb was the unlucky one this season, he got little do but be the butt of a few jokes and do some shooting.

Darth Maul… It started off well in the Clone Wars, and ended as an interesting twist that, sadly due to the cancellation of the series, never got finished. His return last season was alright, but his appearances here (apart from his last one) was … pointless, and had me just wishing he’d go already. Again, he did eventually go in my pick of episode of the Season, but still…

Episodes 14 and 19 are the only comedy episodes this season, and even they’re not really that bad. It is a cartoon after all, and at least this time AP-5 is actually a funny comedic droid…

Overall this is probably the strongest season so far, with the mini-arcs revolving around Kanan, Ezra and Bendu at the start, the three Mandalore episodes and the two part finales were all good to great, and Episode 20 is a really good stand alone story (in case you haven’t figured that out yet). A strong lead villain helps as well, and in fact the Rebels and Thrawn have all been so well built up that I hope the short final season coming up next can pull off the big send-off!