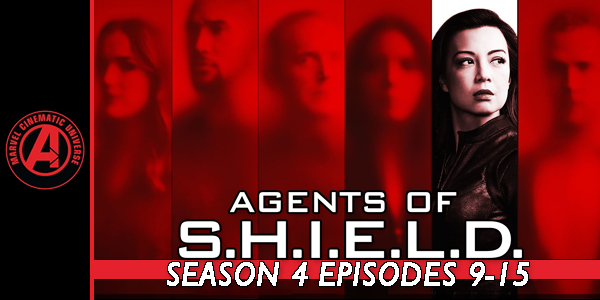 Agents of SHIELD play a game of “who can you trust?” as people start to get replaced by Life Model Decoys in this second of three story arcs this season. Despite the unoriginal concept they actually play with it really well and create a fun story. Phew! Let’s take a look.

Though Coulson and May are growing closer, Coulson remains unaware of the dark secret May is hiding beneath the surface. Meanwhile, Aida is unrelenting in her search for the Darkhold.

Phil Coulson (Clark Gregg) – Weary agent who eventually begins to take control again. His relationship with May is explored, it’s just a shame he was wooing an android…

Daisy Johnson / Quake (Chloe Bennet) – Now back with SHIELD, Daisy is started to adjust to life as an agent again, and is generally less depressed, though still fighting against those who would discriminate against her fellow Inhumans.

Melinda May (Ming-Na Wen) – Technically spends the entire arc asleep in a pod, with one or two brief reprieves. Her LMD duplicate however has a lot to add!

Leo Fitz (Ian De Caestecker) – Fitz begins to realise he may have made a mistake helping to create a super intelligent A.I. in a robot body, and wants to make amends…

Jemma Simmons (Elizabeth Henstridge) – Simmons helps to support Fitz despite her constant nagging about how he should give up on Aida and generally help stop the robo-pocalypse.

Mack (Henry Simmons) – Kind-hearted soul who can be a bit more hands-on if necessary. He was the most outspoken person against creating intelligent A.I.s, so probably feels pleased to be proven right… until the whole killing thing starts happening.

Jeffery Mace / Patriot (Jason O’Mara) – The heroic Inhuman leader of SHIELD… turns out to be neither. He uses a special serum to gain temporary super-strength and only accidentally performed an act of heroics. Still, he wants to prove himself, so… hooray?!

Holden Radcliffe (John Hannah) – Genius scientist who now craves the secrets of the Darkhold, a mystical book of extreme power. He is using an A.I. who has gained ultra-intelligence by reading the book previously, so I’m sure he’ll be fine and won’t be at all betrayed by the cold and logical machine…

Aida (Mallory Jansen) – Super-intelligent A.I. who is not only starting to think for itself inside a human-like body, but now has read the Darkhold and is capable of super-human levels of thinking and creating.

The award for the most confusing screenshot without context goes to…

Coulson and May, two classic characters who have been with the series from the start, get some good character development here. Coulson admits he envies people with normal lives and May even shows a softer and sweeter side around him. I mean, she’s an android facsimile, but she doesn’t know that (at this point), so it was good to see them both drop their guard around each other. A flashback to an old mission with the two of them adds further interest. I truly felt sorry for Coulson when he finds out the May he was finally making ground with after all this time was fake, and when they get the actual May back she will be none-the-wiser.

The final episode of this arc sees Daisy, Fitz and Simmons find out their surrounded by LMD copies, only for Simmons to find out Fitz is also one, which ends in a tense fight between them. Seeing a injured and tired Simmons and Daisy eventually convince each other of their respective innocence and then figure a way out was great TV.

Ignoring Aida, anti-Inhuman Senator Nadeer was a better villain in the series, pretending to love her brother despite finding out he is an Inhuman, then shooting him in the stomach and watching him getting dumped out of a plane. Her setting up SHIELD to look like criminals was also a good “dick move”, to use a popular phrase at the moment. Sadly she was killed by clearly-should-be –Nitro-from-the-comics-but-I-guess-they-weren’t-allowed-to-use-him Tucker Shockley. I will admit the idea of him trying to trigger terrigenesis in her only to end up being Inhuman himself was a fun twist. In fact the battle between him and Daisy, where she repeatedly caused him to explode over and over, was a funny and enjoyable scene.

Mack, who has always just been the gentle giant type, revealing that he once had a daughter called Hope from a past marriage who died as an infant was a least adding a few more layers to him. His relationship with Inhuman and occasional SHIELD agent Elena “Yo-Yo” Rodriguez has been a well acted and believable relationship.

They look just alike! Do you get it?

Episode 12, “Hot Potato Soup”, was based around the running gag of multiple agent brothers with the last name Koenig, all played by the same actor, and how funny that is… except it got old, like… a long time ago, and although we are at least introduced to their older sister L.T., who is not portrayed by Patton Oswalt. Still, the gag wore out by the end of the episode, though at least they did confirm that the four (or five if you include Eric, who died a few seasons ago) are just humans who look remarkably alike. I don’t actually hate Oswalt or his performance, he’s good comic relief, I’ve just had enough of the same gag.

I have to admit to finding Aida quite boring. I get that she is supposed to be one-dimensional in the way she talks because she is artificial and not able to feel emotion, but she just comes off as dull to me. The idea is unoriginal, and the scene where she killed Radcliffe, her creator, was even more predictable. I was disappointed to find out that she continues to be the major antagonist in the third arc.

Actually, adding to that, the third arc doesn’t look promising. It’s based entirely in a super-realistic virtual reality called “The Framework”, and in it Hydra is in control and several characters are evil etc. I’ve kind of had it with Hydra and I feel multiple episodes in a false reality seems like a waste of time. I hope to be proven wrong, but it doesn’t fill me with hope.

This arc, while weaker than the first one, had some good character development for some long-standing characters and was filled with some well shot and/or tense scenes, even if the lead villain Aida left a lot to be desired. My hope is the third arc can keep the momentum going, but given its set in a false Matrix-style reality, I’m not holding up much hope.