Sontarans! Zombies! … Zombie Sontarans! The Eternal Battle is certainly an odd story, but not in a bad way. It takes a possibly over-used classic villain (in recent Big Finish history, anyway) and at least puts a bit of an interesting slant on them. Let’s take a closer look…

The TARDIS has landed in a war zone. The Doctor, Romana and K9 find themselves traipsing through an inhospitable battlefield. Strange lights flicker in the sky, and stranger creatures lurk in the darkness.

When rescued from an attack by a Sontaran tank, the time-travellers discover they’re facing a far more dangerous foe than the battle-hungry clones. This terrifying fight has been going on longer than anyone can remember… and shows no signs of stopping.

With the TARDIS missing and their luck running thin, the Doctor and his friends’ only hope of survival is to uncover the truth about what is happening on this planet. If they can discover the secret of the eternal battle they might just survive… but it might just mean the end of them all.

The Doctor (Tom Baker) – The Doctor is no stranger to war-zones, or even zombie-like beings, but even he is caught off guard by a war-zone full of zombies… though the Sontaran company may be worse…

Romana (Lalla Ward) – Romana continues to try and keep her cool around all situations, and even tries to help the war-mongering Sontaran’s injured soldiers, but it might be too little too late…

K9 (John Leeson) – The Doctor’s robot dog companion, K9’s analysis may be of no use during this confusing battlefield, but at least it can still stun a few things… a few…

Field Major Lenk (Dan Starkey) – Sontaran in charge of the troops of this battlefield, even he is starting to lose morale as the dead keep coming back to life… on both sides of the conflict. 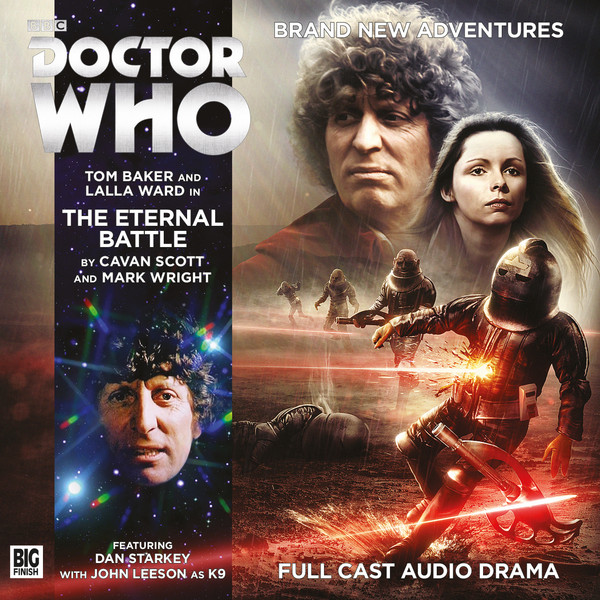 Certainly a dramatic cover, and far better than the dull one we got last time!

The idea of zombies being a Sontaran’s worst nightmare was an interesting spin on the race. Being denied a glorious death and instead being brought back to walk around and attack people randomly would indeed demoralise the cloned war race. The scenes where The Doctor and Romana try to help Lenk and his men are good, they both know they can’t be “friends” due to the complete opposite viewpoint on war, but The Doctor ignores this because he knows they’re in trouble, but doesn’t know how to stop it… or even what it is.

There are some fun scenes in the second half between The Doctor and “Sergeant Major Stom”, including a tank ride and some general new series-esque “Sontaran thinks war-related things are the only answer” jokes. It works well.

As with a lot of Doctor Who, given its been going on for so long, a lot of this story has been done before, war on a loop, zombie-like beings, war-based time zones being taken and sealed…hell the real culprit in the end is revealed to be a rogue A.I.! I mean, talk about over used cliché! Still hard to be too damning on this front though, very few wholly original ideas are left…

The humans who are revealed to be the enemy the Sontarans were facing, do little to nothing, which makes a few scenes right at the end based around their assault a little… pointless? Or at least, not as interesting as I’m supposed to be finding it…

I’m obviously not going to list every Sontaran story, nor am I going to list episodes and stories that featured zombies or rogue A.Is… Basically, although it uses often-used ideas, it doesn’t actually directly connect to any prior story.

The Eternal Battle is a fun listen. Not entirely original, it still has a fun concept for a Sontaran story and some good dialogue for The Doctor and his Sontaran companion in the latter half. Not without flaws, but I wouldn’t mind listening to it again if I have 45-ish minutes to spare.