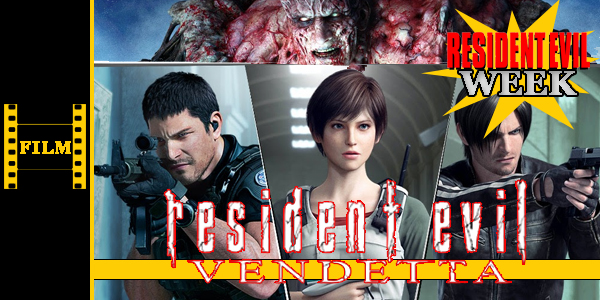 After finishing off the original trilogy of games yesterday, we now finish off Resident Evil Week in general with the reason for the week in the first place: the release of the new CG film Vendetta! Boy… it’s certainly a lot more violent and gory than the two before it, that’s for sure. It also has some extremely entertaining set pieces in it, and is generally a fun “shut your brain off” movie set in the Resi game universe. With that said, let’s take a closer look!

When a mission lead by Chris Redfield goes out of control thanks to Glenn Arias, a weapons dealer now trading in B.O.W.s, and his twisted thirst for vengeance. When several attacks spread across the US Chris and his old ally Rebecca Chambers soon join up with Leon S. Kennedy to take him down before he unleashes literal hell on a large part of New York City…

Chris and Leon, together at la… well, again, but I like to think Resident Evil 6 doesn’t count…

Chris Redfield (Kevin Dorman) – Having come through the other side of his depression in Resident Evil 6, Chris is once again leading BSAA missions against B.O.W.s and their users. Still, when a colleague is killed by Arias he seems more intent on revenge than saving lives…

Leon S. Kennedy (Matthew Mercer) – Leon is now going through the exact same depression Chris went through in Resident Evil 6 thanks to losing all of the men under his command in a recent mission. He wonders how his life got to the point of constantly killing the undead, which is a fair enough thing to ponder…

Rebecca Chambers (Erin Cahill) – The former rookie medic who was able to whip up an anti-toxin or two is now a scientist who specialises in fighting the viruses that are spreading across the black market. She also doesn’t look like she’s aged much, which is odd given it’s been roughly 15 years since the first Resi, in-universe time-wise…

Glenn Arias (John DeMita) – Just to close off this trilogy of “people who lost their families to tragedies and are now taking it out on the people responsible regardless of bystanders”, Glenn Arias is … well, that. Although unlike Curtis Miller (Degeneration) or Alexander Kozachenko (Damnation), Glenn is properly insane due to the events, and has no real rhyme or reason behind his involving innocents in his crazy scheme. 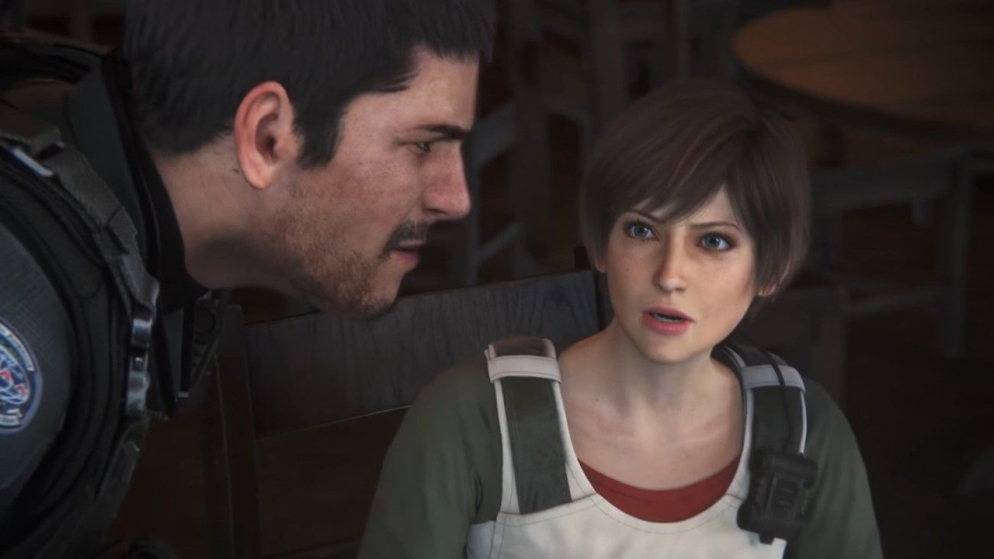 Rebecca is back! She even wears her classic costume… for about five minutes in the middle of the film.

Without a doubt the highlights of the movie are the action set pieces. There are some real good (and delightfully illogical) fights between Chris and Glenn, particularly one on a building roof towards the end of the film, but the standout scene is an extended gun fight in a hallway with tonnes of zombies pouring out all over the place, leading to Chris and eventually Leon having to shoot them all close-quarters. It has a whole bunch of stylish and impractical moves and sequences that you’re left quite breathless at the end of it (though I could have done without Chris spinning powerslaming or DDT-ing some zombies, although performing wrestling moves on enemies has been a thing in the games since Resi4…)

As you can imagine the actual CG is once again better than its predecessor, with fluid animation and detailed textures. Also, as mentioned, this film is bloody and gory, with large blood splats, limbs and heads being sliced and even a zombie’s head being mashed repeatedly with a fire extinguisher. It’s so far removed from the two previous films in tone that I was not surprised to hear the creators of the film refer to it as a “reboot in tone” compared to the two previous films… you’re damn right it is! Took me by complete surprise.

The opening scene, involving Chris and a crew of disposable BSAA soldiers entering a mansion (not unlike the Spencer Mansion from the first game), was full of some good tense scenes and a few good jump scares. It was a good little taster of the actual horror aspect of the series that is starting to come back to the forefront with Resi7, though the rest of the film is very much action-orientated.

It was nice to see Rebecca again after all this time. She was the last original Resi survivor to get a reappearance after Barry turned up in Resident Evil: Revelations 2, and her progression as a character made sense… it’s just a shame she didn’t get to do much action-wise, though that’s in-keeping with her character in the original game (just not the prequel…)

Glenn Arias was a decent villain in the generic action villain sense. Rather than his outrage and lust for vengeance is causing innocent people to get hurt, his outrage just turned him crazy, leaving him just a mad man who wants to destroy the world for… some reason. I didn’t mind the scenes where he treats Rebecca as if she was his dead wife due to the two sharing a resemblance, that was at least “tragic crazy” rather than crazy crazy. It’s just comparing him to previous characters in the game/film series makes him feel a bit… plain.

As for Glenn’s father-in-law looking very much like Bane… could’ve done without that. Needed a redesign for sure. Didn’t mind the needlessly sexualised sister-in-law though, that’s in-keeping with villainous ladies in the series…

With all the game references throughout (and there are quite a few, unsurprisingly!) I was surprised Chris never tried to console Leon and tell him he’d been through what he was going through, given he literally went through the exact same storyline in Resi6. I had to laugh at Leon saying the line “I never thought my life would end up like this…” … not kidding!

One last thing: twice we had cheesy “hold dead person in arms and scream Nooooooo! while the camera pans away and explosions happen”, and both times it was all cringey. Not a good cliché once, let alone twice.

Oh, and Chris’s haircut in this film looks stupid. That too.

Resident Evil: Vendetta is a departure from the previous two films in that it ramps up the gore and violence while also upping the set pieces to crazy levels. I approve! Sure, it was mindless entertainment, but it was still entertaining! A good addition to the core Resident Evil timeline, though once again you’ll miss a few hints and references if you’re not a fan going in, but at least this time you’ll be entertained by some of the fight and action scenes, just shut your brains off first! This isn’t a film that needs its plot put under a microscope, that’s for sure…