Ah yes, the most quoted Bond film by far, and generally the film most, if not all, the following films base themselves on. When a film is THIS much of a classic it’s hard to review because you feel like everyone knows what you’re talking about already (I had the same problem when I reviewed the original Star Wars trilogy…) but here we go. I will state that I don’t think it’s flawless by any means, but it’s certainly a great ride. Let’s take a closer look!

James Bond is given his latest task: investigating gold smuggling by gold magnate Auric Goldfinger. This job eventually leads him to uncover Goldfinger’s plans to contaminate the United States Bullion Depository at Fort Knox in order to greatly increase his own gold supplies worth… 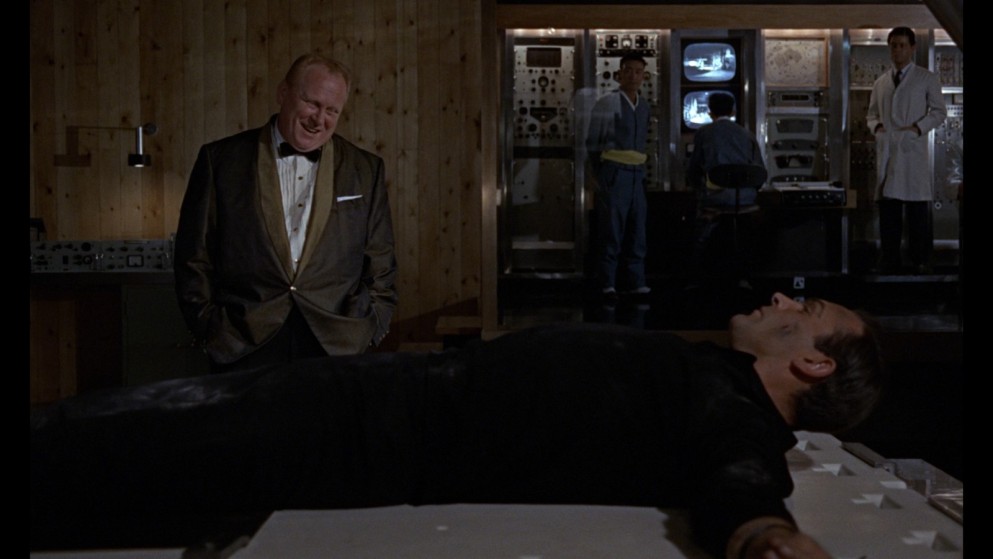 James Bond (Sean Connery) – Code name 007, James Bond is a top agent at MI6 due to his skill at both espionage, combat and charismatic charm… hey, the last one comes in handy more than you’d think!

Auric Goldfinger (Gert Frobe) – Extremely wealthy and definitely shady businessman who has a large collection of solid gold. He also has a weird obsession with killing people after an unnecessarily long delay…

Pussy Galore (Honor Blackman) – Goldfinger’s personal pilot and leader of “Pussy Galore’s Flying Circus”, a group of all-female stunt pilots. Also her name is the most on-the-nose name of all time, but she’s seemingly okay with it, so … good for her.

Oddjob (Harold Sakata) – The mute mountain of muscle that can kill people with a toss of his steel-rimmed hat. I’m not sure if I wouldn’t prefer someone with a gun, but whatever gets the job done in the end, I guess.

Q (Desmond Llewelyn) – Q creates all the gadgets for Mr. Bond and the other 00 Agents, and wishes for nothing more than their safe return… *ahem*…

Pussy Galore… You know, all things being equal, you’d think about changing your name as an adult, surely?

There is a lot to like in this film, you won’t be surprised to hear! Once again Sean Connery is a great Bond, suave and occasionally deadly, and now with a gadget-filled car! Seriously, the getaway chase with Bond using all his car’s tricks is still great fun. I also appreciate how actually flawed Bond is in this film. Not only does he pretty much tell Jill Masterson to betray Goldfinger, causing her to be killed in the iconic gold paint, but her sister Tilly then tries to get revenge, only for Bond to try and help her… before she gets killed by Oddjob. Not to mention his first attempt to contact the CIA fails, though that wasn’t his fault, it’s a strange film for James Bond. He even tries to cut the wrong wire in the bomb at the end! If the CIA expert didn’t slap his hand away and do it properly he would have killed them all… Certainly a more realistic Bond that we’re used to…

Although he has some… weird scenes later in the film, Goldfinger is a great villain. He gets outsmarted by Bond a few times, but is still always grinning because of his confidence in his next idea. Obviously the laser “No Mr. Bond I expect you to die!” scene is iconic and still a very enjoyable one. I also like how when he plan goes tits up he had a US army outfit under his jacket, showing that he always had a back up (even if he did ruin it by walking past some guard, then immediately gunning them down instead of escaping…?)

The scene with Goldfinger and Bond playing golf could have been a rather dull scene given how long it goes on for, but the lead actors really make it work. You route for Bond to humiliate Goldfinger and are richly rewarded at the end.

Oddjob is a perfect henchman, strong, with a fun gimmick and he has a great climactic fight with Bond at the end. Much like From Russia With Love, the fight is heightened by the lack of music in the background.

Pussy Galore, silly name aside, is a great Bond girl. Self confident, able to take care of herself, and not smitten with Bond from the get go. Top stuff.

The classic henchman. Nothing more to say!

This is what always confused me about this film: so Goldfinger invites all those who helped him with his big Fort Knox plan to his base and gathers them all into one room. He then, with the use of a big screen and a scale model that rises from the ground, tells them of how he is going to use the equipment they got for him and generally the full scope of his plan. Fine. One person wants out of the scheme and Goldfiner is fine with this, he walks him out of the room and puts several gold bars in the man’s car before sending Oddjob to drive him away… This is where it gets confusing… He then traps all the people on board with his plan and gasses them to death, then Oddjob kills the guy who didn’t want to be apart of his plan, crushes him and his car into a cube and drives the cube back (on a truck…) to the base where Goldfinger laments having to extract his gold from the mashed cube. Erm… why didn’t he just gas everyone when they were in the same room? Why did he go to great lengths to explain his plan, THEN kill them? And why let the one guy think he got away, only to get killed anyway with the added pain of extracting gold from a car cube? The only explanation is that the writers wanted a way to explain Goldfinger’s plan to the audience and this was the best way they could come up with…

The scene between Bond and Pussy in the barn is really awkward to watch. The two exchange martial arts throws and then Bond literally forces her to the floor and starts kissing her as she struggles and tries to move her mouth away… it really, really looks like rape…

I had the table laser scene, I had to include this as well, obviously!

Goldfinger is a classic, no doubt. It has all the trademark bits of a Bond film, from the intro song/music video, to the big action set pieces and villains with henchmen. It’s a great watch, even though both Bond and Goldfinger come off as a little incompetent, that, if anything, makes it seem more real, despite the absurdity of a lot of it! It does have some flaws in the third quarter of the film, but it pulls it back. It’s not an out and out 5 like I thought it might be going into this re-watch, but it’s a strong 4.