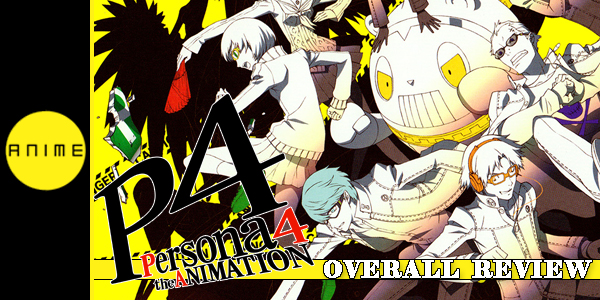 And so I come to the end of my run through of the Persona anime adaptations with an overall look at the Persona 4 series. It was well paced, with action at the start and end, with plenty of comedic antics in the middle, but was it a satisfying series overall? Read on!

Yu Narukami moves to Inaba to live with his uncle and cousin for a year due to his parents working abroad. After looking into a rumour about a mysterious ‘Midnight Channel’ that appears on televisions during rainy days, Yu and his new friends, Yosuke Hanamura and Chie Satonaka, discover a strange world hidden inside the television, inhabited by strange monsters known as Shadows and a curious bear-like creature named Teddie. It is here that Yu awakens a mysterious power known as ‘Persona’, which allows him to fight against the Shadows.

Yu and his friends soon discover that this TV World is related to a mysterious string of murders, in which dead bodies appear during foggy days. With the Midnight Channel warning them of potential victims, Yu and his friends, along with Teddie, form an investigation team dedicated to rescuing people who are thrown into the TV before they fall prey to the Shadows and finding the culprit behind the incidents.

Hooray! It’s actually a picture of the lead cast!

Yu Narukami (Daisuke Namikawa / Johnny Yong Bosch) – Yu is new is town, having moved to join his Uncle after his parents headed off abroad. He didn’t waste time making friends, doing normal things like hanging out, having a good laugh, and fighting demons in a TV world. That sort of thing…

Yosuke Hanamura (Showtaro Morikubo / Yuri Lowenthal) – Yosuke is used to the big city life, having only moved to Inaba due to his father gaining ownership of the town’s Junes stores a year ago. He soon befriends Yu and Chie and gets the excitement he seeks, though whether he is happy when this happens is another matter…

Chie Satonaka (Yui Horie / Erin Fitzgerald) – Chie is a bit of a tomboy, having a love for martial arts and is seen more in tracksuits than skirts, but she does have a soft side, especially for her friend Yukiko. It’s this friendship that eventually gives her the courage to re-enter the TV world alongside Yu and Yosuke, and eventually gain her Persona powers.

Yukiko Amagi (Ami Koshimizu / Amanda Winn-Lee) – Yukiko is destined to take over her family’s famous Inn (or Ryokan, to be unnecessarily specific), and due to this she often feels trapped in her home. Her friendship with Chie helps her feel a bit more free, and will eventually give her the strength she needs to break free of her own personal Shadow and gain the abilities of Persona.

Kanji Tatsumi (Tomokazu Seki / Troy Baker) – Kanji is a rather tough, thuggish man about town, though hidden beneath it all is a far softer side. When he gets taken to the TV world he is faced with a Shadow version of himself which is … well, an extremely over-the-top gay stereotype. Kanji eventually accepts this as part of himself, though just how much of it was childish insecurity and confusion, or actual hidden truth, is harder to decipher…

Teddie (Kappei Yamaguchi / Sam Riegel) – Teddie is a strange… well, teddybear like being who existed solely in the TV world. He befriended Yu and his pals and soon even started joining them in the real world with a created human body. All that being said, he still has no idea of his own past…

Rise Kujikawa (Rie Kugimiya / Laura Bailey) – Rise was a very popular Idol named “Risette”, until being thrown into the TV world and having to face her own inner Shadow. Thanks to the support of Yu and his friends, Rise not only defeated her shadow and gained a Persona, but also came to the conclusion that she wanted to step down from the spotlight and find out who she really is…

Naoto Shirogane (Romi Park /, Mary Elizabeth McGlynn) – Naoto is a child detective prodigy who was seen talking to Kanji during his Shadow incident, before later joining the crew, revealing a rather large secret about himself…

Tohru Adachi (Mitsuaki Madono / Johnny Yong Bosch) – Adachi is an inexperienced police officer who has been paired with Ryotaro Dojima, much to his distress…

Ryotaro Dojima (Unshō Ishizuka / John White) – Ryotaro is obsessed with his work, often at the expense of Nanako, his daughter, who he is the sole carer for. He also takes in Yu when his parents leave abroad.

Nanako Dojima (Akemi Kanda / Karen Strassman) – Nanako is the daughter of Ryotaro and therefore the cousin of Yu. She is still very young but very responsible for her age.

Igor and Elizabeth (Isamu Tanonaka / Dan Woren and Miyuki Sawashiro / Michelle Ann Dunphy) – Igor and his assistant Elizabeth are the mysterious denizens of the “Velvet Room”, this time taking the form of the inside of a limousine. They guide Yu on his journey, but never directly interfere.

A good example of the comedy aspect the show often nails along with the action.

I’ll start out by saying that the cast of characters are a fun bunch to follow. Yu begins the series rather bland, but soon becomes a properly funny straight man in some crazy situations (as well as a serious hero type when it calls for it, obviously!), then we get some good comic relief with a bit of story to them (Yosuke, Chie and especially Teddie), an introverted girl who comes to terms with herself (Yukiko), a sensitive teen who’s unsure of himself so presents a “bad ass” shell outwards instead in Kanji, an idol who doesn’t want to play the games you have to in order to keep the role, but then later decides to go back and do it “right” in Rise, and finally a young prodigy detective who turns out to be a girl, hiding her true identity due to wanting to be taken seriously. It’s a diverse cast, as RPGs tend to produce, but one that’s fun, and in places sad, to follow.

The lead plot thread that binds all 25 (+ 1 OVA) episodes together is a serial killer that the lead group soon find out in connected to a mysterious “midnight channel” that appears on rainy nights, followed by an even more startling revelation that they can enter the TV world and gain powers called Personas in order to battle “Shadows”, which often include Shadow versions of themselves. Now as I’ve said before on this blog, I had got through about half of Persona 3 and have seen Persona 5 through to its end before I started this watch through, and obviously this came after watching all the P3 movies, so Persona 4 was oddly the last of the core storylines I experienced, so it was interesting to see how much closer 4 is to 5 rather than it’s own thing (or rather, how close 5 was to 4 instead of being its own thing, I should say!) Here they fight their own Shadows rather than other peoples, but watching this did lessen my appreciation of 5 a fair bit (especially the mysterious non-human character found in the Shadow world who is normally used for comic relief…)

Anyway, I like how it eventually gets “solved” by a copycat murderer who just wanted attention claims its them, then a person who was manipulated by the actual killer is caught, then eventually the real culprit is found. The fact that the real culprit ended up being one of the lighter, funnier characters in Adachi was a good twist (or at least, I’m sure it would have been had I not found out about it before hand…) Adachi played the psycho role perfectly in the final two episodes, it’s shame that he ended up not being the final enemy either, and it was what I now know as a Persona classic in being a God-like being who judges humanity’s laziness and bad behaviour as reason to wipe them out, only to be foiled by the spirit and enthusiasm of youth…

As mentioned in the opening paragraph the middle had some good comedy “filler” (although most of it happened in the game given its half slice-of-school-life, half monster fighting RPG set up, so it’s technically not filler), especially the scenes in the bar in Episode 15. The end third had some proper heart-wrenching drama as well, as fun, innocent little girl Nanako seemingly died. Overall the series managed to balance the comedy, drama and action quite well, though I would have spread them out more evenly myself, rather than have a bunch of comedy in the middle.

I’ll also mention Kanji and his unknown sexuality here. Now, I was initially pleased at how his inner-shadow was presented as a stereotypical old-fashioned gay person as it was supposed to represent his fears that people would see him as such, as well as his general confusion as to what he really was deep down. The only problem is that the boy he seemingly had a crush on turns out to be a girl, so… Did they back away from the story, or…? I guess we’ll never know for sure, which is a shame because it’s so rare for anime to portray homosexuality in any kind of real or thoughtful light (as Yu and Yosuke’s reactions to the gay stuff should show you…)

The final foe… a giant eyeball with a camera lens iris. Cool?

As mentioned directly above, I would have had less comedy in the middle and spread it out, as by the end of the comedy episodes I was starting to get annoyed that things weren’t moving forward. Also as mentioned, I was upset that Adachi, after being revealed as a great villain, ended up being replaced almost immediately with another God-like “final boss”.

Speaking of the end, yikes. The final official episode wraps up the final battle well, and then marathons the last few months everyone spends together in a few minutes, then we get a minute at the train station before Yu leaves and the credits finish. The OVA episode adds a bit more emotional punch to the last scene, but it’s still not a very satisfying finish.

The animation is sometimes sloppy, and I never got used to the non-shaded, red streak across the face look it went with. Apart from that and a couple of weak episodes (see the three lots of episode reviews for more details!), that was it really.

Yu: Rockin’ the dragon, if you know what I mean….

Overall Persona 4 – The Animation is a good story, with fun and well realised characters. The pacing is a bit off, especially in the middle, and the ending is extremely rushed, but there is still a lot of fun to be had. I had a good time watching this series, and would recommend others do (unless you’re really into the games, and therefore you might be even more disappointed than I was at the rushed ending…)