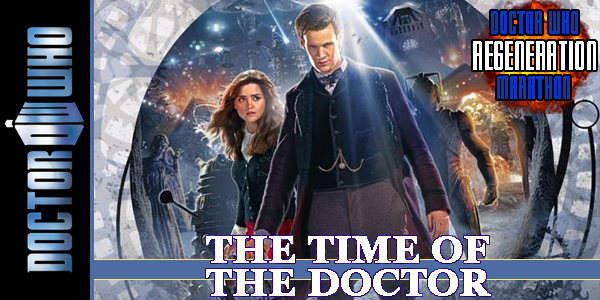 The Time of the Doctor is Matt Smith’s swan song, whilst at the same time being a Christmas special, but also its an attempt to tie up plotholes that Steven Moffat had left, which he sadly does quite badly. Despite all this it is a good send off for the Eleventh Doctor, though I’m not a big fan of the actual regeneration scene either… Mixed bag then! Let’s look at it!

Orbiting a quiet backwater planet, the massed forces of the universe’s deadliest species gather, drawn to a mysterious message that echoes out to the stars – among them, the Doctor. Rescuing Clara from a family Christmas dinner, the Time Lord and his companion must learn what this enigmatic signal means for his own fate and that of the universe.

The Doctor (Matt Smith) – The Doctor is still enjoying his final life, knowing that at some point he’ll end up on Trenzalore, where his grave is… What’s the name of this planet again?

Clara Oswald (Jenna Coleman) – Clara has been travelling with The Doctor for some time, and because of this is well aware of what the word “Trenzalore” means, and why The Doctor is scared of it…

Tasha Lem (Orla Brady) – An “old friend” of The Doctor who is also the Mother Superious of the Papal Mainframe. She is basically used to try and fill in some plot holes left over from the Eleventh Doctor run…

Handles (Nicholas Briggs) – A decapitated head of a Cyberman that The Doctor is now found of carrying around, after reprogramming it, of course. The flesh and blood life form that once lived before conversion was thrilled, I’m sure.

The Eleventh Doctor at the end of his life… well, not the very end, as it turns out, but still…

If you strip away a lot of the bollocks that fills up some time in the episode, the actual story of the Eleventh Doctor, who we now know is on his last life, staying and protecting a small town for hundreds of years is a nice send off. The fact that Gallifrey is nearly breaking through to our universe and “could start the Time War anew” was a good idea as well (though familiar if you’ve just watched the 10th Doctor’s swansong…), plus handy for the whole “Doctor getting a new set of regenerations” thing. Loads of The Doctor’s former enemies trying to invade and stop him from bringing the Time Lords back is a fun idea, and one that has already been well expanded on via the books (even though he actually has no intention of bringing them back…)

Some of the scenes with a very elderly Doctor and Clara were sweet, and lead to a good “final showdown” between The Doctor and the invading Daleks. The actual regeneration energy bit is well done, with a slight remix of the “This is Gallifrey” tune playing as he gets sent his new regeneration energy, plus a rather over-the-top display of firing regeneration energy like some sort of flamethrower, which while a bit stupid, was visually appealing.

I’ll always like the design of the Silence, the large creepy grey alien-looking guys, and while it’s clearly hastily written and wasn’t actually any kind of plan, I do at least like how Mr. Moffat covered his bases a bit with some of his muddled storytelling. The “Papal Mainframe” (complete with the Silence) being actually friendly to The Doctor and his cause here, but a splinter group lead by Madame Kovarian tried to stop The Doctor from ever reaching Trenzalore by travelling backwards through his timeline (but ended up causing the events in the first place). It… sort of works, if you don’t think too hard about it (well, apart from their attempt to blow up the TARDIS, which nearly caused the end of the universe itself… Great plan, guys!)

Although a lot of the humour falls flat in my eyes personally, a lot of the jokes surrounding Clara’s family at Christmas hit the right note, plus the drama later in the episode as well. This is how Time of the Doctor succeeds at being a good Christmas special as well as a regeneration story. 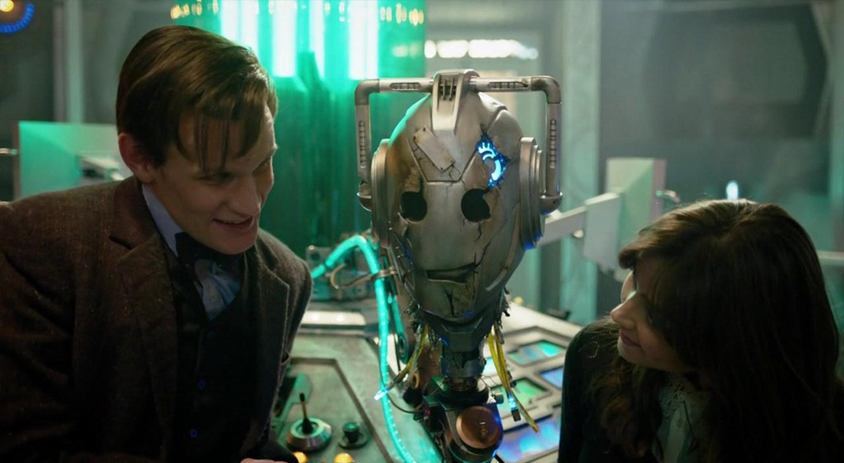 The actual regeneration scene, where the Eleventh Doctor has returned to his youthful self for no real reason other than Steven Moffat wanted Matt Smith to look like his old self before he regenerates, and then he gives a big speech which often dips into breaking the fourth wall, is just annoying to me. It goes on for a while (not 10th Doctor levels, but still a while), and the line where The Doctor says “I’ll always remember when The Doctor was me” just completely takes me out of the scene, he may as well wink at the camera / audience when he says it. I do at least like the brief Amy Pond cameo and that the change ends up happening in a flash, but overall it wasn’t a great scene.

There is a lot of “silly Eleventh Doctor humour” in this story, complete with having to be naked to visit a place (and then getting “holographic clothes”), the Doctor shaving his head bald “because he was bored and found a razor” (I am aware he was bald due to a film role, but you could have just kept the wig on and not mentioned it), and the town of Christmas having a field around it that means people can’t tell a lie… for some reason.

I never liked the Dalek human corpse puppet thing that was introduced earlier in the Eleventh Doctor’s run, and reappear here. We already know the Daleks can create exact duplicates of people in the right era / with the right equipment, dating back to the 1st Doctor’s run, so why they’d have human corpses with Dalek eye-stalks cracking out of their head I have no idea, other than “wouldn’t that be creepy?”. Oh and I never particularly cared about Tasha Lem at any point in the story, instead was somewhat annoyed at her apparent “old friend” status despite this being the first time we’ve seen or heard of her.

Although I thought he did a reasonable job explaining some of it away, the idea that after all of this Doctor’s run, all of the plotholes and dangling threads get tied up by the aforementioned  new “old friend” character and The Doctor sitting at a table and having a brief chat just goes to show that Steven Moffat didn’t have a grand plan, he had a few small plans and never intended to tie them up. Annoying, though like I said, he did manage to talk his way out of it in a somewhat satisfying manor.

The Doctor’s regeneration is about to suddenly happen, starting a whole new set of lives…

Obviously the main bit here is the regeneration, as it’s pointed out that although he may be the “Eleventh Doctor”, he was on his 13th life thanks to the War Doctor (who never referred to himself as the Doctor) and the 10th Doctor’s use of a regeneration while keeping the same body. By the end of the story, the Time Lords give him a new set of regenerations (much like they offered The Master in the 20th Anniversary story “The Five Doctors”), or possibly even an unlimited set, given it’s not actually stated it’s a new cycle.

Speaking of the Five Doctors, in the special the Third Doctor took the “Seal of the High Council of Gallifrey” from The Master, assuming he stole it (when in fact it was given to him) and claiming he’d return it as soon as possible… well, that same Seal is used here by the Eleventh Doctor (complete with him actually saying he “nicked it off the Master in the Death Zone.”), so I guess he never got around to it!

The attempts to plug holes in the past stories in this episode cover several events from the Eleventh Doctor’s first series finale “The Pandorica Opens / The Big Bang” through to many stories from Series 6. Also the cracks in time, the linking narrative of Series 5 (that gets tied up in The Big Bang episode) reappears here, and it’s also shown to be what the Doctor most feared when he saw “his greatest fear” in the episode “The God Complex”.

The Daleks had previously had their memory of The Doctor wiped from their databanks in the Series 7 episode “Asylum of the Daleks”, but thanks to absorbing the mind of Tasha Lem, get the information restored in this episode. There are many alien species from the past either named or appear in this story, from Daleks, Cybermen, Sontarans and Weeping Angels, plus some more obscure like the Terileptils from Fifth Doctor story “The Visitation”. Plus the Monoids from 1st Doctor serial “The Ark” are featured as The Doctor telling a tale of his past through puppets, though it’s not known if he was talking about his original encounter or whether they were one of the races who attempted to attack.

The Time of the Doctor isn’t a bad story. It has some nice Christmasy bits and as far as a hypothetical last act of the Doctor, staying in one small town and defending it from alien threats is a good one. That being said there is a lot of goofing around and the actual regeneration scene is far too self-aware for my liking, so overall I feel the story lands somewhere in the middle of the scale for me. Still, it made sure the series can continue onwards with unlimited regenerations if it wants, so it deserves praise for that, if nothing else.