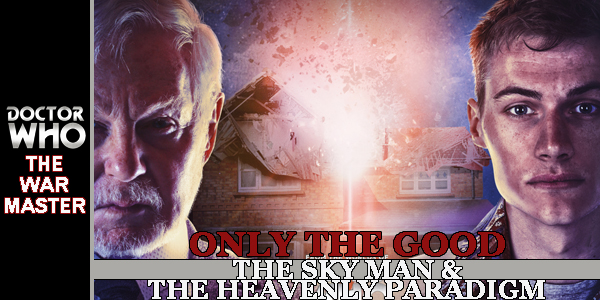 Only The Good rockets to its conclusion in two great stories, with “The Sky Man” being a real contender for Who story of the year. The Master has got himself a companion and wishes to help him save a world? Surely there is something more to this, or has The Master turned over a new leaf? … well, what do you think?! Read on!

Official Synopsis (for The Sky Man):

When his new companion decides to save a planet, the Master indulges this most futile of requests. Materialising on a primitive, agrarian world, both the strangers quickly find their place in it… until fallout from the War invades their happy paradise 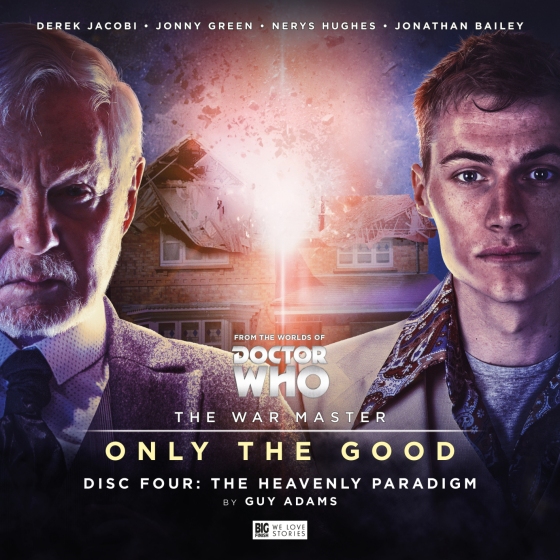 Our two leads, two opposites of each other in many different ways!

The Master (Derek Jacobi) – The Master has a plan, as always. To achieve his goal and end the Time War once and for all he needs to indulge his new “friend” Cole and his desire to save lives…

Cole Jarnish (Jonny Green) – Cole thinks he has been given a chance to really make a difference in this war-torn universe, and he’s going to take it. He wants to save a whole world from the war, and feels up to the challenge…

Elidh (Emily Barber) – A simple farmer’s daughter on a small, insignificant backwater world that is soon going to be a casualty of the Time War…

Mrs. Wilson (Nerys Hughes) – An old and injured Time Lady who has been given the task of guarding one of their most deadly vaults…

The Daleks (Nicholas Briggs) – Even amongst the endless and timeless war, The Daleks are still seeking to locate and destroy The Master for his betrayal… 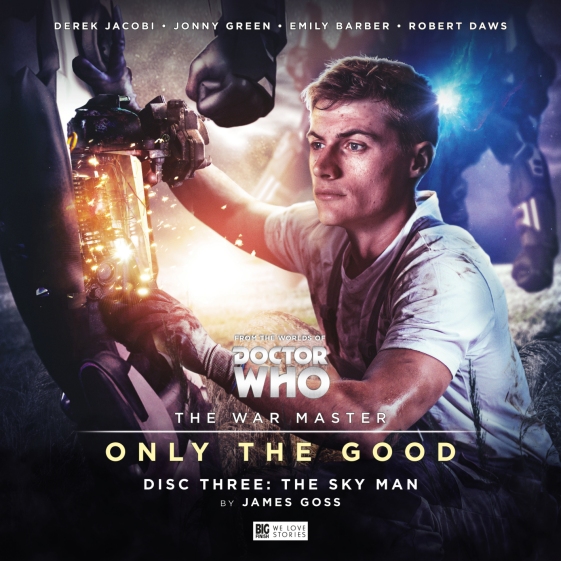 I believe the word he’s going for by the end of this story is “Whoops!”

“The Sky Man” is, quite frankly, brilliant. The Master indulges Cole’s request to save a world and touches his TARDIS down on an unnamed planet, leaving his “companion” to get on with it while he retires to a vineyard and tries his hand at creating some fine wine. Cole slowly inserts himself into the small community by fixing their primitive machines, and even falls for a local woman named Elidh, but when the Time War just slightly wafts over the planet, people start to die. The fallout of an unknown time weapon is killing all of the planet inhabitants, and Cole doesn’t know how to stop it, instead opting to create a special suit they can wear that protects them from the fallout, but also makes it harder to move… The experience is so traumatic that Cole includes drugs that inhibit stress-causing emotions, and before you know it the inhabitants of this world have become emotionless machines, hell-bent on destroying all those alien races that caused them to become this way. Horrified at his own accidental creations and at losing his love, Cole almost accepts his fate until The Master rescues him, and offers him some of his own personal wine. The Master tells him that his creations go on to conquer and destroy countless worlds, and seems rather pleased with it all. Such a great story, I truly hope you didn’t read this paragraph without listening to it, as the slow reveal over the hour and a bit was great, the end result took me by surprise. Heartbreaking for Cole, and that was just the beginning!

In “The Heavenly Paradigm”, The Master arrives at an old Time Lord weapon vault and pretty much uses Cole to set off some otherwise bothersome traps until the two meet the Time Lady in charge of guarding it. The Master eventually outsmarts her and takes control of the titular Time Lord weapon, a weapon that can literally alter the whole of reality, but was never able to be powered before. That’s where Cole comes in, he wasn’t supposed to survive his original fate on Arcking, making him a paradox, and now he has created a race of evil planet conquers that never previously existed, meaning he, as a paradox, has created changes across countless worlds and changed countless lives, all of which shouldn’t be able to happen, making Cole Jarnish an extremely powerful paradox battery, for a lack of a better word, that can power the machine. The Master’s plan eventually works, sacrificing his new “friend” without hesitation and enjoying the view as he sets the machine to create peace across the whole universe… sadly, this is too much for the machine to handle, and while it creates peace in new planets previously dead, it starts creating more issues and problems, and giving The Daleks more power. Eventually The Master is scared, scared so much to returns to his TARDIS and uses the Chameleon Arch to change himself into a human child, presumably to give himself the longest possible human lifespan to survive the war. This last scene is “shown” with some great, ominous reflective narration by The Master, which is just a brilliant end that ties everything with the TV series perfectly.

None… As I always say, when I end up just typing a synopsis as “The Good”, that means I didn’t need to separate the story in any way, it was just… all good!

Another look at the pretty pointlessly Dalek-filled cover.

As I mentioned in the last box, this Master first appears as a human in the Tenth Doctor story “Utopia”. In the story he is said to have been found “as a baby at the coast of the Silver Devastation.”, so this neatly shows how Derek Jacobi can play The Master here, and still have been a human who grew up at the end of the Universe.

One of the things The Master sees through the Heavenly Paradigm machine is the “Dalek Emperor taking control of the Cruciform”, which is one of the events that the Master mentions specifically scared him enough to hide himself away instead of fighting in the TV series.

What a great pair of stories, with “The Sky Man” being a particular delight to listen to. The final episode gives one last great Jacobi performance (at least canonically in the timeline, I hope he comes back for more!) before all the stuff from the Tenth Doctor’s TV run. Very satisfying to listen to, not just these two, but the whole boxset. Highly recommended.