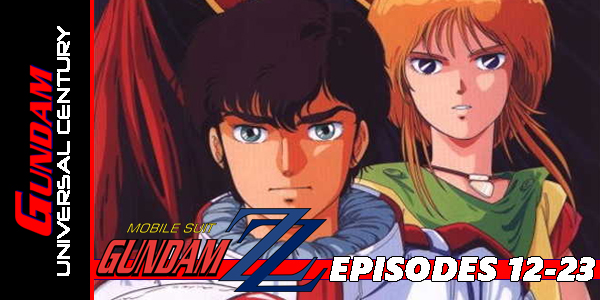 The second quarter of ZZ pulls back on the slapstick comedy a bit, but is still more often than not for laughs. It focuses on Judau’s sister Leina being kidnapped and replaces gag character Mashmyre with a gag character of equal stupidity in Chara Soon, as well as new Cyber-Newtype “Elpeo Ple”. It’s an odd cast, but the show can still be fun in parts, and rather dull or cringey in others. Let’s have a look and see how much of it is actually good!

The Argama is back in space and with a full compliment of pilots, although most of those are junk-dealing kids who snuck on board in the past… They’re still being pursued by the Axis / Neo Zeon ship the Endra, which is now under the command of Chara Soon. 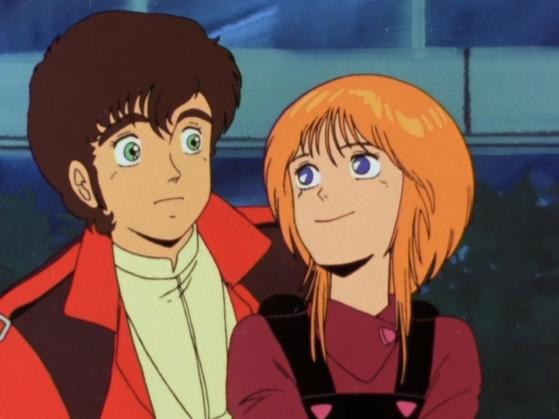 Judau Ashta (Kazuki Yao) – Judau wasn’t sure about becoming a pilot for the AUEG, but his little sister convinced him. At least he’ll make some money out of it and be able to support her… if they don’t both die on the battlefield…

Roux Louka (Naoko Matsui) – Roux is a mobile suit pilot who has been assigned to the Argama. She pilots the Zeta Gundam now Judau is in control of the Double Zeta, and has shown herself to be a capable pilot.

Elpeo Ple (Chieko Honda) – Ple is a cyber-Newtype with strong psy powers, though an extremely immature, child-like personality when not behind the cockpit of a mobile suit.

Elle Viano (Eriko Hara) – Elle is one of Judau’s friends from their junk dealing gang, but now she’s one of the Argama’s pilots alongside him. She controls the Gundam Mk.II.

Beecha Oleg (Shingo Hiromori) – Beecha, and his follower Mondo, resent the idea of having to work for money and lodgings and wish to jump ship to the Endra, for some reason assuming that the other military ship without their friends to back them up would be a better place to be…

Bright Noa (Hirotaka Suzuoki) – Bright is the captain of the Argama, and a veteran of the One Year War. Now he has several pilots and mobile suits, he’s confident he and his ship can be of use in the war with Axis.

Haman Karn (Yoshiko Sakakibara) – Haman is the leader of Axis, now known as Neo Zeon. Technically the child Mineva Zabi is their leader, but as she’s too young her top aide Haman is really in charge. She wishes to control the whole Earth sphere, though she doesn’t particularly care for the people of Earth…

Glemy Toto (Tsutomu Kashiwakura) – Glemy is a high-ranking soldier of Neo Zeon who reports to Haman. He is in control of the cyber-Newtype Elpeo Ple, her creation being one of his many secrets…

Leina Ashta (Maya Okamoto) – Leina is Judau’s sister. She is young but is often more mature than her older brother. She is on board the Argama and helps out with smaller tasks.

Chara Soon (Hazuki Kadoma) – Chara is a member of Axis, and has a rather immature personality, made worse by almost sexual outbursts whenever she’s in the cockpit of a mobile suit… 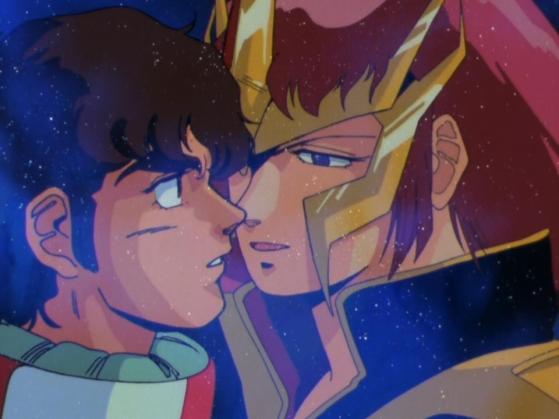 The trio of Judau, Roux and Elle is still an enjoyable group, with Iino, the shy friend occasionally joining in as well. Again it makes for a better time than the moody angst we had with early Amuro or pretty much the entire run of Kamile. The addition of Elpeo Ple to the cast is a sometimes fun move, but other times on the annoying side. Her over-the-top immaturity and tunnel-vision love of Judau is interesting (and sad when you already know her backstory) but there are scenes when it gets to be a bit much…

Episode 17 “Retrieve the Core Top!” sees the captured Chara Soon escape and then get recaptured. It’s a good episode that sees the debut of Ple, who uses a black version of Haman’s Qubelely suit, and has Judau do the classic “can’t shoot a human but can shoot down a mobile suit with a human in it” dilemma. What’s the difference? None technically, killing is killing, but visually and mentally it makes all the difference to not see your foe as human…

Episodes 18 and 19 see Judau sneak into Axis to try and rescue Leina, but he ends up encountering Ple, and later, Haman. Judau’s conversations with Haman are interesting, especially as the cold-hearted leader of Axis seems to take a liking to him straight away. A tiny bit of a personality to Ms. Karn? Hooray! This continues in Episode 22 when Judau and Haman meet on the latter’s ship, she even goes to kiss him! It all leads to Episode 23, where both the Axis forces and the Argama descend to Earth for the next phase of the story…

The two part story “Tearful Cecillia” is also good, though some of the comedy fails to land. Argama crewman Torres finds an old friend of his, but she ends up being a spy and general selfish bitch, even in death… sort of. It’s average overall, I guess, and hard to explain without going into great detail over something I found boring, for the most part.

Their “God” comes to life! … How did this society collapse so fast?!

The Neo Zeon side is really uneven at this point. Chara Soon and Gotton of the Endra are complete jokey villains, always messing up in “humorous ways”, and then we get to Glemy, who is still on the jokey side, but has become more serious, and Haman herself who is a stone-cold and serious leader. It’s this point where the story begins to go towards more serious storytelling, but the jump isn’t very subtle, that’s for sure!

I still hate Beecha and Mondo. They manage to get on board the Endra like they wanted, and surprise surprise, they’re treated even worse! They soon get back on board the Argama and actually have the gall to complain about being put in the brig! They called the enemy ship in and helped it out against the Argama on several occasions! Realistically they should be executed for treason and putting the lives of everyone on board at risk. Instead in the following episode they’re wandering about the ship as if nothing happened, and soon Beecha becomes the pilot of the returning mobile suit Hyaku Shiki! Rewarded for being complete bastards… great stuff, Bright!

The storyline of Leina being captured by Glemy and being forced into the life of an aristocrat was sometimes funny, but it’s definitely gone on too long. Judau has come close to getting her back, but for the most part he’s still goofing off with his friends until an episode needs him to suddenly fly off on his own because he’s remembered his dear little sister has been kidnapped.

The two part story “The Phantom Colony” is a bit weird. It involves both the Argama and the Endra finding a colony that had been left off the map, causing its residents to go all native and tribal, for some reason. There’s a power struggle between two sisters, one of whom believes they should spread their religion to other colonies, while the other believes that staying off the radar is the only way they’ve managed to keep their way of life. It’s… alright, but I was a bit confused at the timeline of it all, as they worship a mobile suit, something that was only really invented a few years before the One Year War, but it’s old and covered in vines and moss. People haven’t been living in space for a hundred years yet, so how did these people become so simple and savage? *sigh*, I mean, I guess it wouldn’t matter if it told a good story, but it doesn’t even do that… 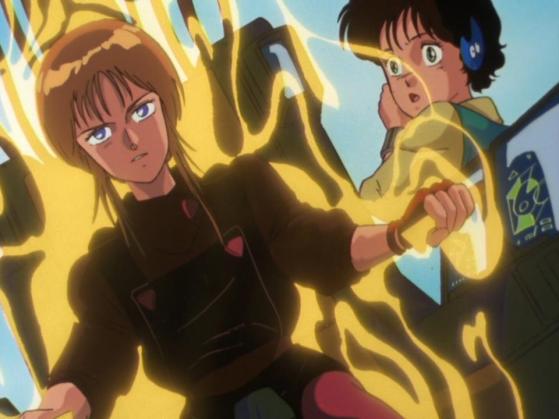 Leina reacts to the lovely girl suddenly glowing yellow and being all killy.

While an improvement on the first 11 episodes, this chunk of ZZ is still more bad or average than good, though the lead protagonists are still enjoyable to watch at least. Chara Soon replaces Mashymre but has the exact same role, making it pointless! Ah well, an improvement is still an improvement, let’s just see where the more serious tone takes it in the next half of the series, if memory serves it’s quite jarring!