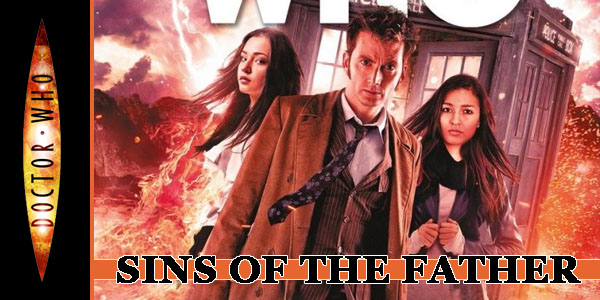 As we continue to run towards the end of Titan Comics’ “Year 2”, we return to the 10th Doctor and his on-going deal with Osiran God Anubis, which of course goes completely fine without incident! … Let’s take a closer look.

Trombones turn to terror when the Doctor, Gabby and Cindy visit New Orleans at the height of the jazz age… the Nocturnes are back! This time the threat comes from their terrifying chief, intent on enslaving the human race through sound! And speaking of enslaving, it would appear that Anubis is up to his old tricks – will the Doctor and his friends be able to stop this God from damaging the whole of Time? Could there be something even more sinister behind all of this, hidden in the shadows?

Cindy is alarmed by the back of The Doctor’s head.

The Doctor (David Tennant) – The Doctor is enjoying himself as he travels with two young and eager companions, but somewhere in the back of his mind in the Osiran known as Anubis…

Gabby Gonzalez – Gabby has been travelling with The Doctor for a while now, but with her good friend Cindy now joining in she’s having even more fun than before… well, until all the death starts, as per usual…

Cindy Wu – Cindy can’t believe her luck! Not only is she travelling in the TARDIS just like Gabby, but she has fallen in love! This can only end well!

Roscoe Ruskin – Roscoe was a jazz musician during the height of the New Orleans jazz craze. He has fallen for Cindy, though he isn’t familiar with her rather unbelievable backstory yet, things are looking good!

The Nocturne – A “conceptual being” trapped in another universe. It wishes to break into ours through the medium of sound and song…

Anubis – One of the Osirans, a super-powerful and ancient race that have long since been extinct, but he wants to return to the regular universe, and with the Doctor’s help, maybe he can…

The Time Sentinels – Ancient creations of the Time Lords that had one sole purpose: protect the many splintered timelines held within “The Axis”. 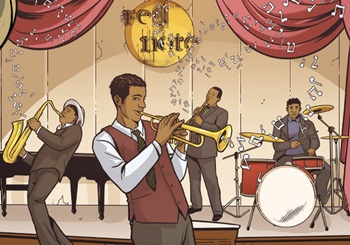 Those are some crazy white floating notes you’re making there!

While I don’t know if I really needed to see The Nocturne quite so quickly after their last appearance, I did enjoy the two part comic “The Jazz Monster / Music Man” which opened this volume. A being that we can only perceive as being “made of sound” isn’t new to Who, but the way it possesses musicians during the New Orleans jazz boom in order to create a way in for itself is a fun idea. Plus the recently joined Cindy falling in love with one such musician, only for him to be killed in the successful effort to stop it, was a rather quick introduction to the more tragic events that tend to follow The Doctor around. It was a perfectly fine two part story.

The other half of “Sins of the Father” is actually the first two parts of a five part story called “Old Girl” that follows on into the next volume. In it we see The Doctor, Gabby and Cindy finally arrive and start to deal with Anubis and his request to be freed. While Gabby stays on Anubis’ planet with old pal Dorothy (and the all-powerful, but not evil like his father, Anubis) while The Doctor and Cindy pop-off to the Dark Times of the universe, something normally forbidden, to get some Osiran tech. They accidentally get knocked into “The Axis”, where random alternate timelines have been “stored” by Gallifrey in the past. They encounter some Time Lord Sentinels, which look remarkably similar to Shayde from the 5th and 8th Doctor DWM comic strips, but eventually escape.

It’s nice to see Cindy do something out of the shadow of Gabby, her sarcastic personality is often amusingly written, but as the cliffhanger of Anubis’ father Sutekh appearing in the last page will tell you, this is very much the start of a story, rather than something that can be judged on its own merits. 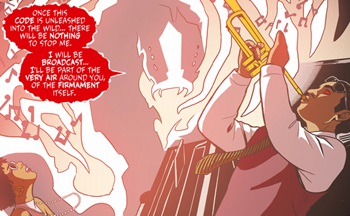 Not a lot to say really. The first story was fine, not amazing, and Old Girl parts 1 and 2 had some fun Time Lordy stuff and a fun call back to DWM, but it was just setting the stage for what will happen in the next volume. So again, nothing amazing, but nothing blow-away either.

It has a collection of short stories from some event or other at the back, one for each of the 10th, 11th and 12th Doctors, but they’re too short to be anything significant, and to be honest I can’t even remember what they were about…

Oh and whoever made the “6” at the top of the books’ spine white?! Every other number is black, including the one after!! ARGH!! 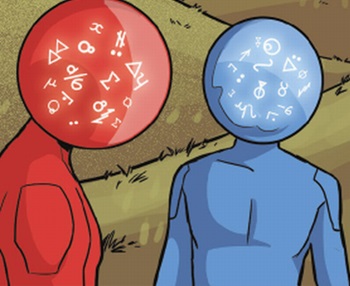 I got the old reference! I wonder how many others did though…

Anubis and his quest to be freed has been a theme throughout these Titan comics 10th Doctor stories. His father Sutekh first appeared in Fourth Doctor TV classic “The Pyramids of Mars”, as well as a few audios (including “Kill The Doctor! / The Age of Sutekh” which was only released two weeks ago, as of me writing this!).

The Nocturne first appeared a few volumes ago in the story “The Singer Not The Song“, where as the Sentinels are clearly based on eventual sort-of companion Shayde, who first appeared in 5th Doctor comic “The Tides of Time”.

While “Sins of the Father” is a fun, quick read it definitely feels like the lead in to something big, rather than anything of great significance. It’s fine, and if brought alongside the next volume I’m sure the two together will be a satisfying whole, but as it stands Volume 6 has to get a score of…