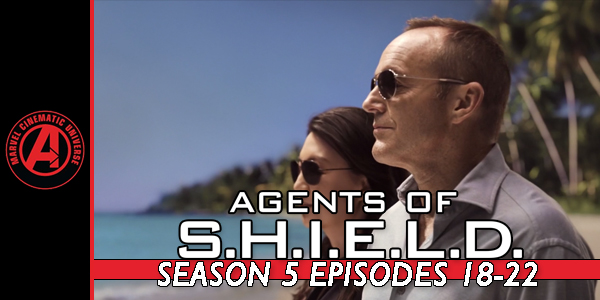 Agents of SHIELD’s Fifth Season comes to a close, and boy, it has a lot of twists and turns, as well as pay-offs to long-running storylines. I really enjoyed this string of episodes, and if this ended up being the overall finale it would have been fine as well. As it stands a smaller-episode-count Sixth season has been confirmed for next year, so… anyway, let’s take a closer look at how Season 5 ended!

Ruby Hale and Strucker are preparing to unleash the power of Gravatonium and create the Destroyer of Worlds through Ruby herself. The rest of SHIELD are splintered around the place, but they know that stopping this process is how they can save the world… 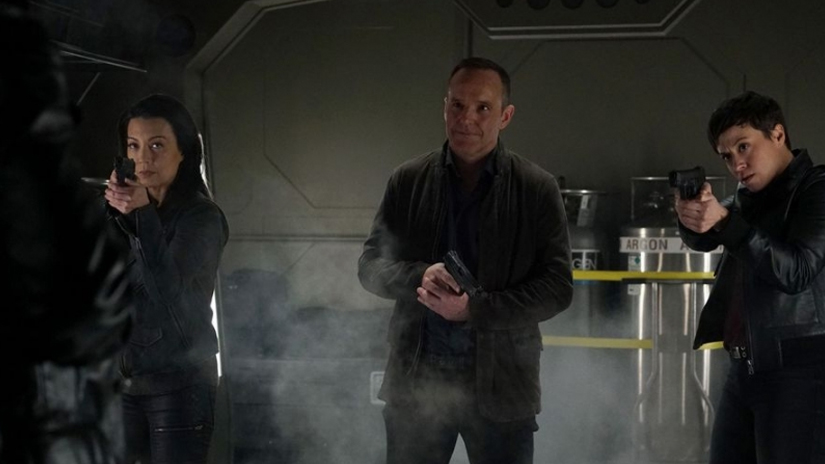 May, Coulson, and … the female agent who’s had a semi-recurring role since Season 4 but I can’t remember her name.

Phil Coulson (Clark Gregg) – Phil Coulson is dying… again. This time he’d like it to stay that way, but first he’s hoping he can stay alive long enough to see the world safe…

Daisy Johnson / Quake (Chloe Bennet) – Daisy will do anything to save Coulson, but with the potential end of the world hanging over her head, it’s very much a case of “one thing at a time…”

Leo Fitz (Ian De Caestecker) – Fitz has gotten in touch with his ruthless alter ego, but he is managing to reel it back in and help his wife save the world… or prove that time can’t be altered, either way!

Jemma Simmons (Elizabeth Henstridge) – Jemma has become convinced that time is written in stone, the fact that her future grandson is still wondering around means that nothing has stopped the apocalyptic future from happening… Still, may as well try to stop it anyway!

Mack (Henry Simmons) – Mack is a kind and forgiving man… apart from when those he loves locks him up in a cell and runs off. That kinds to puts him off them a bit… Only a bit though!

Elena “Yo-Yo” Rodriguez (Natalia Cordova-Buckley) – Yo-Yo has seen a horrible version of her future self telling her that the only way to save the future is to let Coulson die. One person in exchange for the whole of Earth? Sounds fair, really…

Deke Shaw (Jeff Ward) – Deke is Fitz and Simmons’ grandson from the apocalyptic future they’re trying to prevent. If they do there is every chance he’ll blink out of existence, but hey ho, got to give it a go anyway, right?

Glenn Talbot (Adrian Pasdar) – Glenn has been physically and mentally tortured by the remnants of Hydra, and the broken man left behind isn’t someone to be trusted…

Hale (Catherine Dent) – Hale was Hydra, but then she wasn’t because of what they would do to her daughter… who has now gone rogue and betrayed her… She must be stopped! Hail… no-one, I guess. It’s complicated.

Ruby Hale (Dove Cameron) – Ruby believes its her destiny to become “the destroyer of worlds” and the new top dog of Hydra, so she and Werner von Strucker are on their way to making that dream a reality…

Werner von Strucker (Spencer Treat Clark) – Werner believes he has perfected the machine that can infuse Ruby with Gravatonium and make her fulfil her destiny! Screw the potential danger to the entire planet, this is more important! 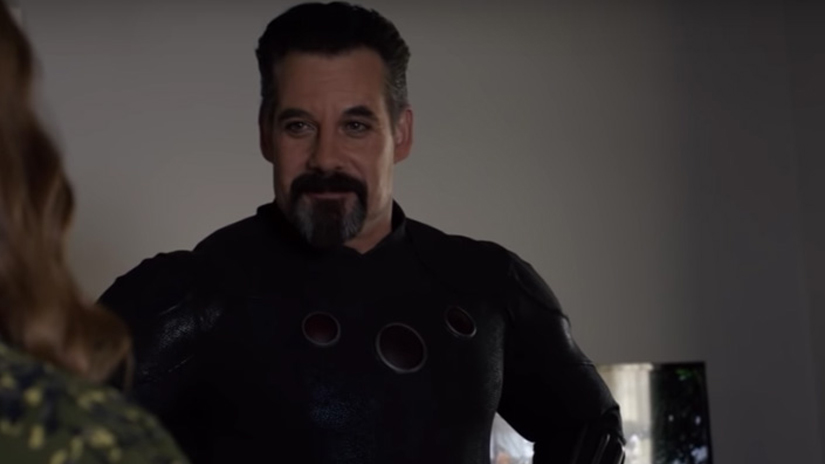 Love how they managed to get the three red dots across his chest like the comic book villain, despite pretty much everything else about him changing.

I guess the main two storylines here are Phil Coulson seemingly accepting his actual, final death and Talbot finally delivering us the MCU version of Graviton, the seeds of which were planted back in Season 1. I enjoyed Coulson fighting against his team’s idea to re-revive him, the mental scarring of his previous resurrection still alive in his head. He finally got his wish, though he had to out smart his team’s efforts to do so, which had the knock-on effect of helping save the world, so… win-win! The final scene of the season, which sees Coulson and May in Tahiti to spend the former’s last days was great (especially the call back to the “it’s a magical place” code phrase from Season 1) and would have made for a good over-all series ender.

Poor Talbot being mentally tortured and then absorbing the Gravatonium to seemingly make amens for his actions under Hydra hypnosis was a legitimate sad way for him to go. As Graviton (not that he was ever called that) he had a lot of Magneto about him, the hovering, the lifting cars and other objects up, but also the tragic twinge to him, especially the scenes where he visited home and scared his wife and child instead of inspiring them. I liked the slight tie-in to Infinity War, where he thinks he needs more Gravatonium deep in the Earth in order to be strong enough to pop over to New York and help out against Thanos (not knowing that he’s not there, and would soon turn up in Africa, but hey-ho). His final showdown with Daisy was good, though over quite suddenly. Seeing what used to be Talbot flung into outer space and left floating was a good end to a surprisingly tragic character… Though at the end of the day, Adrian Pasdar was just playing up to his type-cast role again!

Episode 18 finishes the Ruby / Werner storyline, and sees Yo-Yo, thinking the slightly Gravatonium’d Ruby was the destroyer of worlds that she knew would be coming, and then slashing her throat was graphic, but made sense. I didn’t really buy everyone giving her a hard time about it…

The finale also had the sudden death of Fitz, who gets crushed under rubble. I totally brought into it, until they intentionally didn’t show a memorial plaque that was being put up and I thought something was up. Sure enough, the Fitz that went into space to be frozen so he could wake up in the future to help everyone is still out there, and now there isn’t a future to free, so they’ll just pop up into space and nab him. Still, effective few scenes there.

I liked how Deke talked about potentially just vanishing, and then when everyone changes the fate of the world, he just never appears again, or even mentioned. It’s a shame word has just got out that he’s going to be a regular in Season 6, because having him just vanish from everyone’s memories, including the viewers, would have been a clever thing to do. Still, I really enjoyed the character, so… I’m happy overall he’s back. 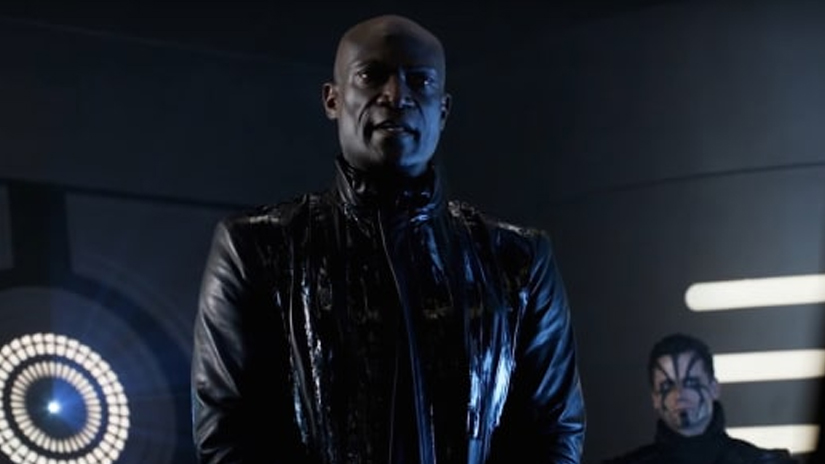 This hasn’t been a great season for interesting aliens…

I felt everyone trying to bring Coulson back was a little… odd. The future Yo-Yo literally said saving him ends the world, and he himself didn’t want to be saved, so… it’s not really a hard choice! Seeing May crush the thing that could have killed Talbot so it could be used to save Phil was crazy, really. Also it being a mix of two call backs to the show’s past might have been a bit too much fanwank, but… whatever.

It was a shame to see Karl Kreel, a.k.a. the Absorbing Man get killed off in a rather unspectacular way. He just gets absorbed by Talbot, and that’s that. Ah well, he lasted longer than I thought he would, to be honest, I never thought we’d get a showdown with Hulk or anything.

The alien Confederacy ship, its army of “Remorath scavengers” and the Kree Taryan were all… quite dull really. They felt very “cheap 90s TV sci-fi” in looks. Not the end of the world, and they weren’t the focus at the end, but still. 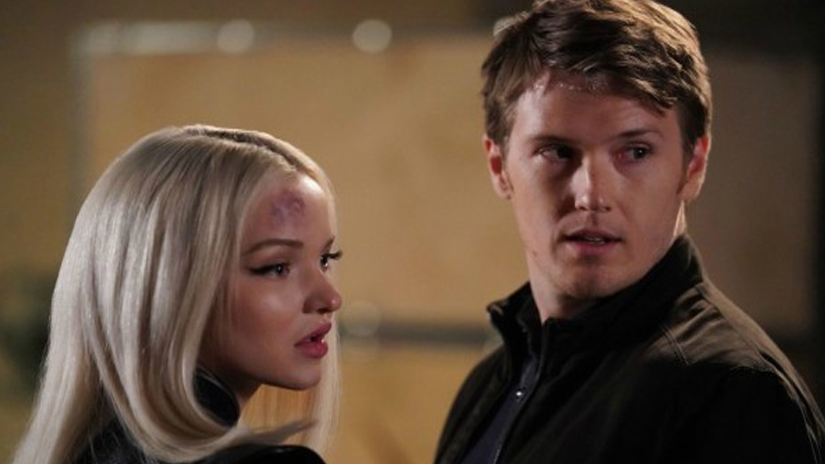 Awww, they were a lovely couple… until the “nearly ending the world” thing.

Agents of SHIELD Season 5 ends with a fun couple of Episodes, and a good ending. Coulson is given a good farewell, and things are mostly set up for a more standard Season 6. It may not have burned the house down, but it was good viewing overall, and I’m happy to hear of more episodes coming next year.