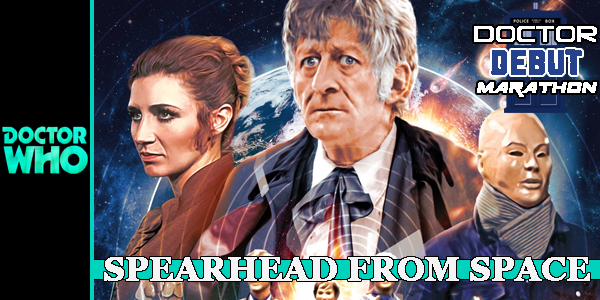 In a lot of ways Spearhead From Space is nearly as significant as An Unearthly Child as it’s the first time the show goes through what feels like a proper reboot, and does so successfully. Gone is everything we associate with the character, including its lead actor, replaced with a new Earth-based set up with a group of soldiers who battle alien threats… and it’s in colour no less! The fact that in four episodes they manage to establish the new status quo, introduce new characters and a new Doctor, and create a brand new alien species (the Autons!) is quite the feat. So let’s take a look in more detail, shall we?

Forbidden to continue travelling the universe by his own people and exiled to Earth in the late 20th century, the newly regenerated Doctor arrives in Oxley Woods accompanied by a shower of mysterious meteorites. Investigating the occurrence is the United Nations Intelligence Taskforce (UNIT for short), lead by The Doctor’s old acquaintance Brigadier Lethbridge-Stewart, who is soon to be just as confused with The Doctor as he is about the new alien threat… 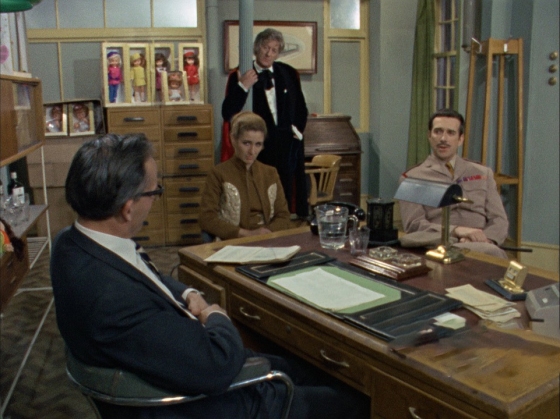 The Doctor (Jon Pertwee) – His mind and body still a jumble after his forced regeneration, The Doctor collapses onto the green grass of an Earth field. His exile has begun, and his first day will be anything but quiet…

Liz Shaw (Caroline John) – Although Liz is happy with her projects at Cambridge University, curiosity has lead her to have a previously proposed meeting with Brigadier Lethbridge-Stewart. But what does UNIT actually do?

Brigadier Lethbridge-Stewart  (Nicholas Courtney) – The Brig has been put in charge of UNIT for some time now, though only two major incidents have really happened, they must be prepared for the possibility of more. What he needs is someone good with science, just in case The Doctor doesn’t happen to arrive the next time…

Captain Munro (John Breslin) – A Captain in UNIT, Munro does his duty as requested and is dedicated to the cause… Why he soon vanishes forever after this story is anyone’s guess.

Channing (Hugh Burden) – Who the real Channing was is a mystery, this Channing is an Auton duplicate created by the Nestene Consciousness in order to “assemble” its greater self on Earth and start a takeover of the planet.

Major General Scobie (Hamilton Dyce) – Scobie is a top-ranking officer in the regular army, and the man UNIT goes to if it needs full military backing. Such an important role, it would be a disaster if he was replaced by, say, an alien facsimile of himself…

John Ransome (Derek Smee) – Ransome is a top man at Auto Plastics, having just made a big deal in the states… so why has he come back home to find he’s been given the sack? … and why are there loads of plastic dummies lined up on the walls?

Sam Seeley (Neil Wilson) – Sam is a harmless, somewhat trampy man who lives in the countryside with his nagging wife. One day he finds a glowing meteorite, and sees nothing but potential financial gain, rather than, I don’t know, potential death.

“I’m hardly going to just hang around a military organisation, am I? I’ll just hop into the TARDIS and… Oh right. Bugger. So… where’s my desk?”

As I mentioned in the opening paragraph, this story has so much to juggle, but somehow manages to pull it off. The new Doctor starts off as a bit of a gag character as he slowly comes to his senses, then settles into the more arrogant but nice Third Doctor we know and love by the end of it, dealing with the raw fact that he is stuck on Earth, so he may as well join UNIT. Although The Brig is the only one who actually stays past this episode, UNIT is well established as a strong but small military force that is becoming better equipped to deal with alien threats, and Liz Shaw, although often sarcastic, is a great fresh take on a companion, in that she is intellectual and almost on even terms with The Doctor himself. By the final scene the trio of The Doctor, The Brig and Liz Shaw leaves you with nothing but the feeling of “this is going to be exciting going forward!” rather than “this isn’t what Doctor Who is about! Grrrr!”, which could have easily been the reaction.

As for the overall plot going on in the background, it’s a good one. Alien pods and evil duplicates are nothing new to sci-fi, even at the time, but the idea of living plastic and shop window dummies crashing through the glass and literally gunning down scores of innocent people on the street is a terrifying image, and an effective scene. Before that, former business partner John Ransome being attacked by an Auton (as they’re known) is frightening, especially as Ransome tears up trying to tell his tale to UNIT later on, showing how dramatically it effected him (as a lifeless, faceless dummy pursuing you and trying to shoot you repeatedly would do…)

The Nestene Consciousness’ new body just being some tentacles in a box is disappointing, but Channing is the front man for the alien being for 90% of the story, and he’s great. He just… looks the part, you lay eyes on him and you instantly don’t trust him, be it his body language or his way of speaking, he does a great job of being someone who clearly isn’t human any more.

The rest of the cast fill their roles out well, Munro is the Brigadier when the Brig is elsewhere in the story, Major General Scobie is the steadfast military type with a bit of an ego, the staff at the hospital during the opening half are nice, kindly medical staff who look after The Doctor despite not knowing what species he even is, Seeley and his wife are the comic relief, and George Hibbert is the owner of Auto Plastics who is being hypnotised by the Nestene Conciousness, but has brief flashes of knowing he’s not doing what he wants to do, tragically. They all play off of the central trio and our lead antagonists well, and it creates a great overall experience with nothing standing out as flawed.

The look and feel is really unique as well, not that it was their original intention. Due to strikes as the BBC film studio they had to use actual film cameras rather than tape, and record on-location for all the scenes, leaving us with a really weird, filmic story with actual (and sadly often echo-y) buildings and rooms, no sets what-so-ever. It also meant that this story got a HD transfer and released on Blu-Ray, and it’s quite the surreal experience watching the whole story in HD, despite being filmed in ‘69. Great though!

A strange last thing to see before you die…

It’s honestly hard to come up with anything. Not only is it just a really good story, but it’s a really good story that manages to accomplish so much at the same time. It was a mammoth task, but it pulls it off. All of it. New cast, new concept, new foes, new technology, all done justice.

I mentioned echo-y rooms and the tentacles at the end looking a bit naff, but these are all unavoidable and enough “of the time” for me not to even remotely care. It doesn’t damage the experience, that’s for sure.

Alongside everything else, this story is the first to establish that The Doctor, and indeed all Time Lords, have two hearts. Retroactively you just have to say it never came up before, I guess!

The Autons would reappear several times, though only one more time in the classic run of the series (against the Third Doctor again in “Terror of the Autons”) This story was used as a basis for the revival of Doctor Who, as the Ninth Doctor’s debut story, “Rose”, follows similar beats to this one by including Autons smashing shop windows and the like.

The two previous invasions the Brigadier mentions are when he encountered The Doctor for the first time while fighting robotic Yeti in “The Web of Fear”, and when UNIT first debuted to fight the Cybermen alongside the Second Doctor again in “The Invasion”.

Spearhead From Space is a triumph, it could have easily collapsed under the weight of all it had to introduce, let alone the behind the scenes issues that lead to it having to be hastily filmed on location with new cameras, but it somehow accomplishes everything and tells a good story on top of that. This is how you reboot a show and change its direction while still keeping everyone happy, it’s no wonder Russell T. Davies used it as a base when he relaunched the series in 2005. It’s a proper master class, and as you’d imagine, comes highly recommended by me!