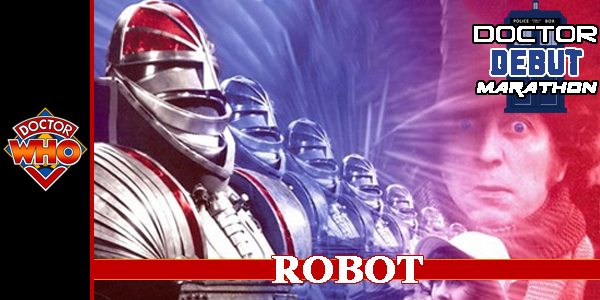 Unlike Spearhead From Space, Robot doesn’t try and reinvent the wheel, while it introduces a very different take on The Doctor, it otherwise feels like a regular Pertwee story. This is something will change immediately after this (in fact the remainder of this season feels like a fresh new show in tone) but as for “Robot” it’s very much still in the past. Does that make it bad, though? No, of course not. It’s a fun story, though one that may have set its heights too high compared to its budget. Let’s take a look!

Trouble is brewing once again; top secret plans are being stolen with their guards killed. All evidence seems to point to the culprit being a sentient robot created by a think tank; however, his basic programming prevents him from killing, providing a contradiction to the clues.

At the same time, the Doctor is recovering from his latest regeneration; can he regain his senses and help UNIT solve the case before time runs out?

Wow, that look on Benton’s face… Can’t even describe it…

The Doctor (Tom Baker) – The Doctor goes through a bit of a post-regeneration crisis, not only quoting himself, but eventually trying on various weird outfits and chopping a brick in half (?), but he soon has to get his head straight as the whole world is in danger again!

Sarah Jane Smith (Elisabeth Sladen) – Although Sarah is still concerned about her friend The Doctor, she is also still a journalist, and wishes to get to the bottom of a series of thefts that have UNIT worried…

Harry Sullivan (Ian Marter) – Harry is a Doctor on the payroll of UNIT, and therefore has the unenviable task of having to look after The Doctor after one of his more… colourful changes.

Brigadier Lethbridge-Stewart  (Nicholas Courtney) – The Brig isn’t too fussed about seeing The Doctor change, having dealt with two previous incarnations, but he is concerned about secret plans for a dangerous weapon being mysteriously stolen…

Sgt. Benton (John Levene) – Sgt. Benton soon become Warrant Officer Benton, and with his promotion comes… the same kind of bizarre trouble that always awaits him as a member of UNIT.

Miss Winters (Patricia Maynard) – Winters sees herself as a member of the intellectual elite, and she gleefully helps lead a group of like-minded geniuses plan how to takeover the world and help teach and guide the lesser intelligent people on how to properly behave in their utopia. So, a bit crazy, really…

Professor Kettlewell (Edward Burnham) – Kettlewell created a near-sentient robot simply named K-1, but in order to fool the masses and take eyes away from the program he left the Think Tank company “on bad terms” and began helping them from afar. He is also a member of Winters’ “Frontiers of Science” faction, though he is still a bit iffy on potentially nuking a good majority of the Earth’s population.

The K-1 Robot (Michael Kilgarriff) – K-1 has pretty much achieved sentience, if it weren’t for the humans who keep reprogramming him over and over, confusing him as to which is the right directives to follow at which time. It’s almost as if humans aren’t to be trusted… 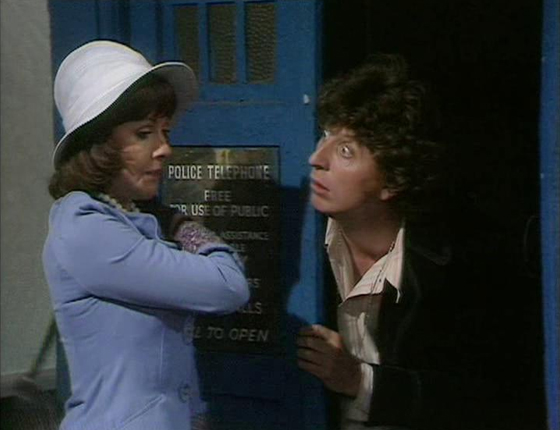 This is the only screenshot not from the recent Blu-ray release, can you tell?

First thing’s first, this is the debut of Tom Baker, and he’s very quick to make the role his own. Ignoring the over-the-top weird costumes (although the exchange between The Doctor in a Viking outfit and the Brig, which goes something like “Doctor, UNIT is a covert organisation…” “and you think I might stand out like this?” “… You just might.” still makes me chuckle) he soon settles into a more aloof, laidback and occasionally silly Doctor, by episode 2 you’ve forgotten about Pertwee’s more arrogant but likable version of the Time Lord, this strange man wearing a long scarf with a large toothy grin is now the Doctor. With the exception of when he’s in a lab making a special type of virus, he just gives off a completely different vibe, especially when he interrupts the Frontiers of Science meeting by doing magic tricks and generally acting like an idiot to draw attention away from Sarah. When the end of the story arrives it already feels like he’s been playing the role for ages.

As I said in the opening, this is the debut of the Fourth Doctor, but it feels just as much like a farewell to the Third Doctor as it does the Fourths debut. The Doctor’s UNIT lab, The Brig and Benton, scenes of UNIT soldiers firing weapons randomly and getting killed, it’s all very Third Doctor-y. Even Sarah Jane is very much the roving reporter she played alongside the Third Doctor, rather than the basic, but extremely enjoyable, companion she ends up being with Mr. Baker.

The actual story, which mixes Isaac Asimov’s Robot laws (can’t kill humans, etc.) with King Kong, is fun, though not flawless. Where it works is the arrogant Miss Winters and her group thinking their above most of humanity, and the idea of a killer Robot that is just gaining enough sentience to freak out about being sometimes told to kill and other times that his core directive is to not harm humans.

Professor Kettlewell’s character is a good one as well, how he’s seemingly the kindly old scientist who has been tossed aside by a big business, his idea being misused for evil, but it turns out he is still on the “evil side”, his robot being misused by himself. He’s not as cold blooded as Winters et al though, so when it comes down to potentially causing a nuclear Armageddon he’s not really on board. It’s a nice, more complex character than it first seemed.

Lastly Harry Sullivan is introduced, and although I’m not a big fan of his old fashioned “hello there old bean” manor of speech, he does play off of The Doctor and Sarah Jane well, and will continue to do so for the next bunch of episodes. Something that always makes me laugh is when The Doctor is trying to show Harry how he’s fit now and he karate chops a brick in half before running on the spot, leaving Harry to simply say “good lord”, or something like that (he fact that at the end of the story the Doctor thumps a brick and it hurts his hand means it was some weird post regeneration side effect, which makes the scene even weirder… and somehow more funny) In fact the whole scene between the two, which ends up with them jumping rope together before Harry is tied upside down in a cabinet, is really fun.

The budget just wasn’t there for the last episode. In it the K-1 Robot expands to King Kong size (and then back down, and up and down because they couldn’t keep a constant scale of size…) and the production team just couldn’t cope. The scenes of K-1 picking Sarah Jane up and carrying her around like the aforementioned large ape just looks really poor, as does her “holding on” to a chimney that’s clearly not there. Throw in the toy tank from earlier that they tried to use perspective to make look like an actual tank, and you have a script that should have been slightly re-written to better accommodate what they could accomplish. I don’t normally comment of effects from older shows, but I know what they could have done in this time period, and they should have known they couldn’t do this, especially after their attempts at large dinosaurs in the previous season… 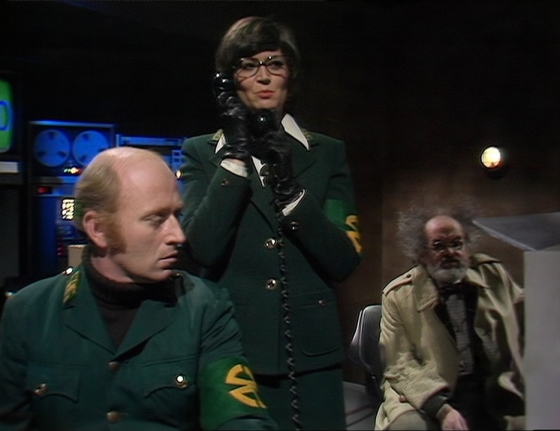 Beyond obviously following on directly from “Planet of the Spiders“, there isn’t actually a lot. The Doctor quotes himself from two earlier Third Doctor TV stories, “The Time Warrior” and “Invasion of the Dinosaurs”, in his opening moments. Funnily enough, this story and the previous one in terms of Doctor debut stories, both featured the gag of The Doctor’s TARDIS key being kept in one of his shoes.

The K-1 robot, upgraded as the “K-2 robot”, actually reappeared and faced off with the Twelfth Doctor in a short comic story called “Robo Rampage”. It was included in the back of the “School of Death” graphic novel, but I apparently forgot to even mention it when I reviewed the GN last year…

Robot is just as much a farewell to the Earth-based UNIT stories of the Pertwee era as it is a welcome for the Fourth Doctor, but despite a few technical hiccups being just that little bit too obvious, it’s still a really fun story. A good cast, both regulars and guests, and Tom Baker finds his footing surprisingly quickly. Robot is a fun debut story, even if it doesn’t light the world on fire, like most of the stories found elsewhere in Season 12 do…