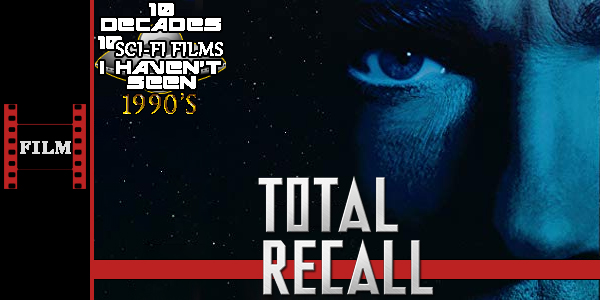 It was hard to pick a 90s sci-fi film for my decades marathon, given the key part of the title being “haven’t seen”, as having been born in the mid-80s I grew up on 90s films, be it at the cinema or flicking around on the TV. I ended up choosing Total Recall as I knew at some point I’d caught the film half-way through, and I’m pretty sure I’d seen bits of the start somehow or another, but I’d never sat down and watched it from start to finish. Turns out that this was a rather important part, more so than a lot of films…

Construction worker Douglas Quaid is having troubling dreams about Mars and a mysterious woman there. His wife Lori dismisses the dreams and discourages him from thinking about Mars, where the governor, Vilos Cohaagen, is fighting a rebellion. At Rekall, a company that provides memory implants of vacations, Quaid opts for a memory trip to Mars as a secret agent… 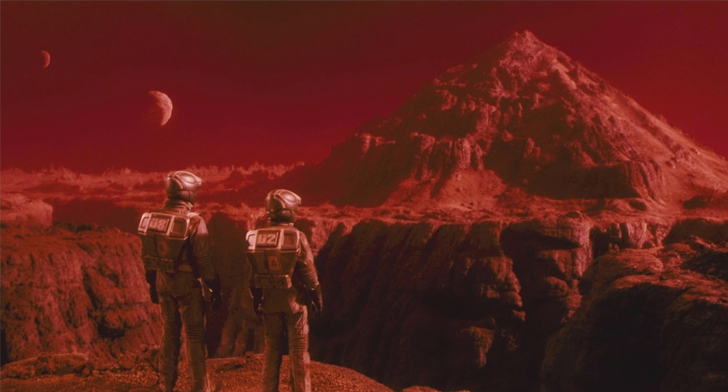 A Martian vista… with the red turned all the way up!

Melina (Rachel Ticotin) – Melina is the girl of Quaid’s dreams… literally. She’s either an actual girl Douglas is dreaming about, or she’s the construct he made up for the purpose of his implanted memories…

Lori Quaid (Sharon Stone) – Lori is Douglas’ wife, and possibly an undercover agent for Cohaagen, depending on how you view the film…

Vilos Cohaagen (Ronny Cox) – Cohaagen is the governor of Mars who has a tight grip on the colony due to controlling how much air the colonists get. Would he really hold back an alien secret that could cost him millions though?! … Well, yeah, that part is believable all right…

Richter (Michael Ironside) – Richter is Vilos’ right hand man, and the person who is directly responsible for keeping Quaid’s real identity a secret… In his implanted memory… maybe?

Benny (Mel Johnson Jr.) – Benny is also a member of Cohaagen’s lot, who pretends to be a poor taxi driver in order to befriend Quaid and get his to drop his guard… possibly.

Kuato and George (Marshall Bell) – Kuato is a strange mutant… baby… thing, growing out of his brother George’s chest. Believe it or not, he leads the resistance against Cohaagen… Might be real or might not be, etc. etc. 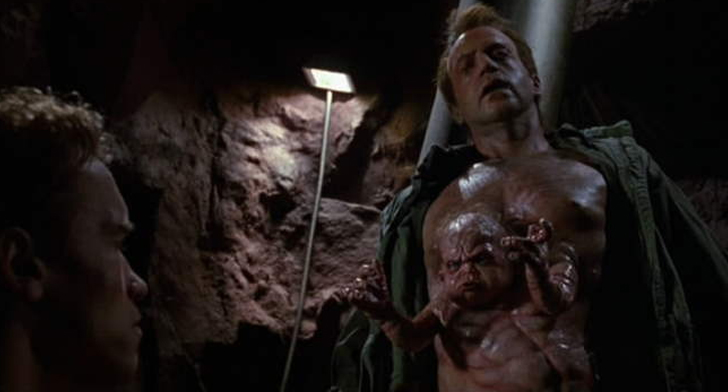 So, let’s get the obvious thing out of the way: the possible framing device. Everyday normal Douglas Quaid wants to get memories implanted in his brain of not only being on Mars with a woman he kept dreaming of, but he choses to be a secret agent, and before going under one of the people working in the room with him mentions how a “blue sky on Mars” is a new one on him. We cut away, and then cut back to see Quaid struggling in the Rekall machine and he eventually breaks free and is suddenly an arse-kicking machine fighting off armed gunmen in an adventure that takes him to Mars where he sees the woman of his dreams (that was created on a PC before he went under) and the last shot of the film is Douglas Quaid looking out on a now blue sky’d Mars… To me, there isn’t any doubt that the idea is from when he goes under to the end of the film is the implanted memory. It’s a fun concept, and there is a bit where a psychiatrist type enters Quaid’s apartment to talk to him about being stuck in the machine and if he doesn’t accept that this isn’t reality, he’ll never leave, and while it’s a clever scene, it’s the only scene I’m not sure whether it was real, or a part of the dream… It’s a good thought though, and the best part of the film. Makes you think.

What I consider to be the implanted memory, a.k.a. 90% of the film, is a good old-fashioned 80s/90s Schwarzenegger action film, just with some good (especially for 1990) effects and Martian backgrounds. Arnie is chased by evil guy and his henchman, who work for soulless businessman, and shoots up the place (with really explicit gore in this one…) and gets the girl. The action is violent, over-the-top and filled with one liners, which is what you must be expecting given the lead and the time period, and its good fun. There are some action using holograms which is at least unique though!

On that note, the sci-fi elements are good, though I’m not sure having less air would lead to mutants who have psychic ability, but I’ll let that slide due to good practical effects… Actually speaking of good practical effects, there are several scenes of people being thrown out onto the Martian surface and their heads start expanding, eventually their eyes start to pop out of their head, and it’s all very disturbing… and very well done! An alien (or Martian, I guess?) machine that could create enough oxygen to cover the planet and make it livable straight away at the push of a button is a little… far-fetched as well… but then if you think it’s a false memory implant anyway, who cares?

Towards the end it’s “revealed” that Quaid was formerly working for Cohaagen under the name “Carl Hauser”, and that once he got his “real” memories back he would remember he’d betrayed the resistance so their leader could be killed. It’s again a fun twist, and does add some question marks over the “is this real” thing, though again… I don’t think it is. Speaking of the leader of the resistance, can’t say I was expecting a half-outside baby…chest… thing to be the leader, but it was at least really well made, and had a creepy voice to boot, which I don’t know about you, but that’s what I look for in a leader…? 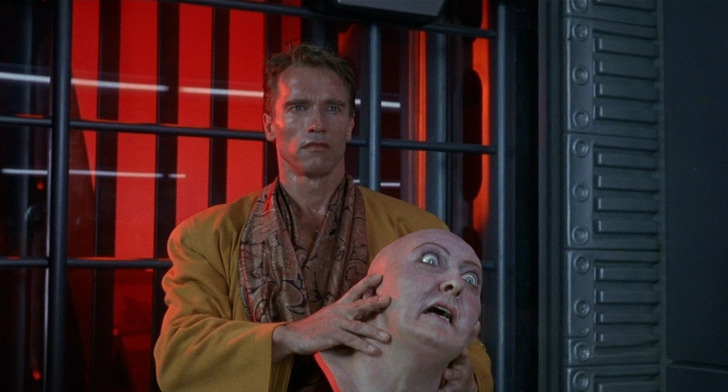 Along with people’s eyes popping out of their heads, this scene with Arnie removing a weird female android head was one of the few things I remembered…

To be honest, not much. That doesn’t mean it’s a “perfect film”, it’s just that it’s a cheesy Schwarzenegger film, but one that has some interesting sci-fi ideas within its framework. So long as you know what you’re getting, I’m not going to talk about Schwarzenegger’s bad acting or how the villains were cookie cutter, I just won’t give it a 5 star rating or anything… It is what it is, and it’s a good example of it.

That being said, a scene of Quaid appearing in the check in station on Mars under the guise of a chubby woman, only to have the weird mechanical head malfunction, is just… odd. I still don’t know how to take the scene… it’s funny due to the over-acting of the malfunctioning “woman”, but then Arnie removes the head with such a stern face and it leads straight into a daring escape that it just feels… odd. Out of place, like the writers thought the mechanical head bit would be cool and quickly wrote it into the script before getting to the big escape sequence that they’d originally planned. 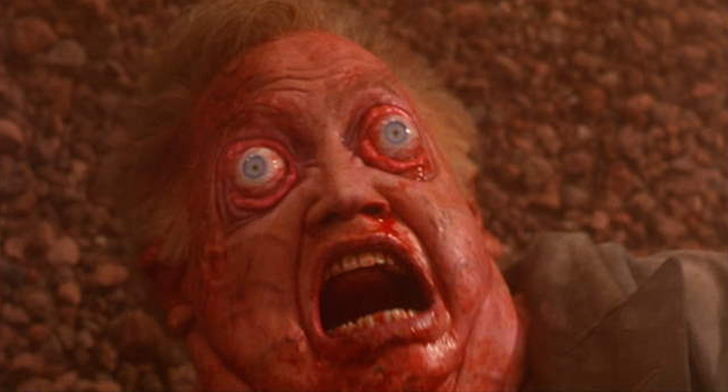 Total Recall is a classic Schwarzenegger film, but with a really interesting, sometimes even thought-provoking, framework around it. You get the action, the cheese, and some good sci-fi and practical effects. What’s not to love? Well… apart from the normal trappings of this type of film, but then if you’re not interested in 80s/90s action cheese then this isn’t the film for you, anyway…