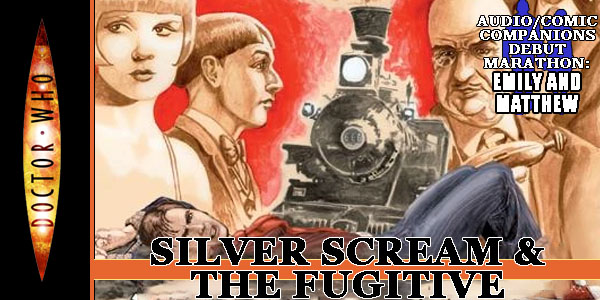 This is a rare one, an IDW comic story (well, stories). I wasn’t a big fan of the IDW series, and re-reading these two confirmed that opinion. Wonky artwork (especially Silver Scream!) and endless, relentless call backs right from the off. The stories aren’t bad, but I just don’t like the presentation, not helped by the fact that I only own them digitally thanks to a Humble Bundle a fair few years ago. Either way though, I consider them “canon” to my personal Doctor Who timeline, so Emily and Matthew are indeed comic companions, so here they are in this marathon! Let’s take a look…

The Doctor arrives in 1920’s Hollywood and uncovers a conspiracy. (Deep synopsis there!)

Ignoring the bad artwork, why does The Doctor look like he’s ashamed of what he’s saying?

The Doctor (David Tennant) – The Doctor is travelling by himself, still shaken over having to leave Donna behind, memory-less. To honour his old companion he’s decided to visit Charley Chaplin in 20’s Hollywood, a visit Donna always wanted to make… Soon business is very much like usual, even if he is companionless.

Emily Winter – Emily is a wannabe actress in the thriving 20s Hollywood scene. Her ambition is a plus, though in this case she may have wished to stay home…

Matthew Finnegan – Matthew is a line-runner in a big Hollywood studio, and during his time around the buildings he’s grown more and more suspicious of new arrival Maximilian Love…

Maximilian Love – Max is actually a Terronite, an alien species that has recently banned theatre in all its forms. Max and his friend Leo decided to take a machine that can steal the dreams and talent from one person to another, and head to 1920s Earth to become big stars…

Archie Maplin – Archie is a lot like Charlie Chaplin, but less copyright-y. His talent is due to be taken by Maximilian Love, if The Doctor can’t save him in time!

Lau’Tan – Lau’Tan is a Gizou, a shape-shifting alien who is working for someone only known as “The Advocate”. He takes the form of the Krillitane who had taken the form of human teacher Mr. Finch… for some reason, and tries to get The Doctor executed by the Shadow Proclamation.

Brarshak – An Ogron who is taking part in negotiations with the Draconians and the Sontarans, but all three have ended up arrested. He and his people hold strong resentment of The Doctor for his past misdeeds towards his people…

Kraden – Kraden is a Draconian Ambassador who was helped to broker a deal with the Ogrons and the Sontarans, but ended up arrested instead…

Stomm – Stomm is a Sontaran Ambassador, as little as that means with the entirely war-focused race. They wish to enlist the help of the Ogrons and the Draconians because the war with the Rutans has gotten so bad that they’re open to negotiating help…

Hey, the artwork for this panel is actually quite good!

Silver Scream has some fun ideas going for it. The setting is quite unique, the Doctor is upbeat and fun, and there is a really fun on-foot chase scene that coincidentally makes references to classic silent films and moments that was well written. The royalty free Charley Chaplin filled the void easily enough, the lead villains were… fine, bit by the numbers, but their more comedic master plan helped sell a greater sense of fun to the story. It’s just a shame about the awful artwork, but I’ll get back to that in The Bad section (obviously!).

Emily and Matthew are quite good companions too. I don’t know how much their 1920’s ideals would have carried them across multiple stories (and if memory serves, given what they get up to later in their run, the writers didn’t know either…) but they are at least refreshing in their debut, especially in the more modern Who, which often relied on companions from the present.

The Fugitive is not bad, I like The Doctor going on the run with members of three classic Doctor Who alien races, and I appreciated the shout-out to Charley Pollard when the IDW team reuse the idea of The Doctor saving someone who was fated to die in a fixed point in time. It had its moments, but it also had some bad moments…

The Doctor, a Sontaran, a Draconian and an Ogron surrounded by Judoon… Fanwank much?

As mentioned, the artwork is pretty poor all round, especially Silver Scream and later parts of Fugitive. It’s not even a different style that isn’t to my taste, it’s actually just … bad. Likenesses that are poor, bodies misshaped and at awkward angles… it really gives off the vibe of being rushed.

The Fugitive has some story issues as well, mainly far too much continuity. The Doctor goes on the run from the Shadow Proclamation when they put him in trial (cue references to the Valeyard!) and he escapes with a Sontaran, a Draconian and a Ogron. He is pursued by Mr. Finch, the Krillitane creature he had defeated previously, though he later turns out to be a shapeshifter impersonating the Krillitane shapeshifter… Completely pointless, other than referencing a past 10th Doctor story. Throw in some corrupt Judoon and it’s a mess, really. It comes across like they made the references first, and then did their best to mould a story about them. 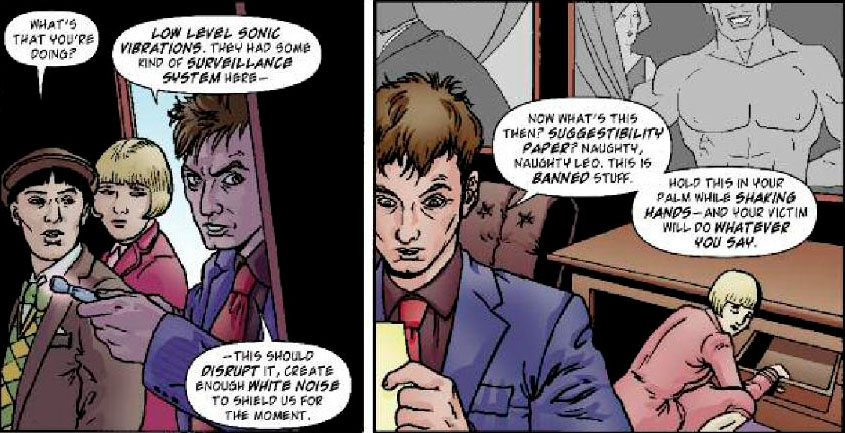 A shot that includes Emily and Matthew! Hooray!

Silver Scream-wise, there is only a few references to The Doctor’s painful parting with Donna in “Journey’s End”, which is also where the Shadow Proclamation and its female leader first appeared. The Fugitive has the previously mentioned name drop of Charley Pollard and her similar origin from the Eighth Doctor audio story “Storm Warning”, and lots of call backs to Tenth Doctor TV story “School Reunion”.

There are also causal mentions of lots of different stories to do with the races featured, including 3rd Doctor TV stories “Day of the Daleks” for the Ogrons and “Frontier in Space” for the Draconians, and several different Sontaran stories. It also references the “he will knock four times” prophecy that is fulfilled in the Tenth Doctor’s finale “The End of Time”, and calls back to the IDW pilot comic “Agent Provocateur”, which is where the Gizou first appeared. There are also several other call backs for the hell of it, but I’d be here all day if I covered those…

Silver Scream is actually a fun story that introduces some unique companions, but it’s severely let down by its poor artwork. The Fugitive on the other hand is a pretty poor story that suffers from wonky-to-bad artwork on top of that, making it worse. Not a great start to the IDW run, and I’m certainly in no hurry to go back a re-read more of their stuff after this…