So the Audio / Comic Companion Debut Marathon comes to a close with the Eleventh Doctor’s Titan Comics companion Alice… plus John Jones and ARC, who last far less, but do travel with The Doctor, to be fair to them! Anyway, let’s have a look at “After Life”, which unlike the 10th Doctor stuff, is actually four short stories with connected themes, rather than all being multi-part affairs…

Alice Obiefune has just lost her mother when the Doctor explodes into her life.

But what does this grieving young woman have to do with the career of a 70s musician, an amnesiac alien, and a terrifying cosmic threat?

In the wake of the second Big Bang, find out what the Doctor gets up to when Amy and Rory aren’t around! 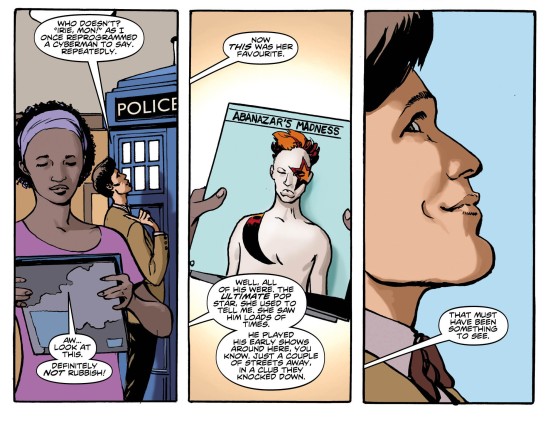 The Doctor (Matt Smith) – Amy and Rory are off on their honeymoon, and The Doctor has decided to do some solo travelling while he leaves them to it. Little did he know he was about to end up on a whole new set of adventures away from the Ponds…

Alice Obiefune – Alice has just recently lost her mother, her job and it’s looking like she’s about to lose her house. It seems like things just can’t get worse, and in the grand scheme of things, she’s right!

John Jones – Jones is a musician in 60s London, but he’s not very confident in himself, not that he’ll ever outwardly show it… at least not until he goes on quite the journey of self-discovery, and danger…

ARC – ARC has a complex backstory, but to put in simply (and to not spoil future reveals) he’s is an alien being currently captured and being tortured by the company known as SERVEYOUinc.

The Talent Scout – A member of SERVEYOUinc, the man only known as The Talent Scout has had many run-ins with The Doctor, but in the wrong order, something he plans to use to his advantage…

August Hart – August is the chief of security of the United System Research Base, a base that is part of SERVEYOUinc. He happily tortures a blob of matter without a care in the world, at least until The Doctor makes him care…

Not something you see every day!

“After Life”, the first story in this batch, is a good introduction that works in a different way than the 10th Doctor’s Titan companion’s intro did. Gabby was stuck in a rut with her family and wanted to express herself creatively, but The Doctor didn’t want to take on another companion, whereas Alice no longer has family, and literally reached rock bottom to the point of potentially contemplating suicide, then she meets The Doctor who is more than happy to change her life for the better by taking her along with him. Both methods work, but this was quicker and more to the point (which makes sense as Gabby’s intro story was three issues long, compared to this single story), plus is quite the unique take on a companion’s reasons for travelling. The “enemy” of the story is a multi-coloured dog-like creature, but it’s all a bit of fun that gives us a reason for The Doctor and Alice to meet.

Next up we have “The Friendly Place”, which features, of course, Alice’s first trip in the TARDIS being an alien world in the future. It turns out the peaceful park The Doctor wanted to show her had been replaced with a tourist nightmare, including a shady scientific group seemingly torturing a creature of some kind. Naturally The Doctor, with Alice’s help, frees the blob and foils the plans of those who were doing it harm, very basic stuff, again at just one issue it was always going to be. The company (SERVEYOUinc), the chief of security (August Hart) and the blob entity itself are all key components in the story arc that plays across the Eleventh Doctor Year 1 run of comics.

“What He Wants…” is a bit of a run around, that for sure, as Alice looks at her Mum’s record collection, leading to the Doctor visiting two of these artists, one (John Jones) being crap, and the other being in the middle of an alien threat by the man only known as The Talent Scout. Jones follows The Doctor and Alice on board the TARDIS and is actually key in helping save The Doctor from the mental powers of the Scout, who has hypnotised many other residents of 30s Mississippi. It had a few “crazy Eleventh Doctor” moments, including a monster truck version of Bessie the car, but in general it was all a bit of a rush. John Jones is a fun character, mind you…

Finally we have the final two-part story, “Whodunnit? / The Sound of Our Voices”, which introduces us to the alien known as ARC, who for most of the story is running around a satellite lab putting people in comas, albeit accidentally. It just wants to learn things and communicate with people, but his attempts at doing that has that unfortunate side-effect. The Doctor, Alice and Jones move around the station, meeting various SERVEYOUinc employees, including August Hart again, thought for the first time from Hart’s perspective (one those meeting out-of-order things!) until The Doctor eventually figures out what’s going on and not only helps him, but runs off with him as SERVEYOUinc were doing experiments on him. ARC is looking for its body, seemingly, but that’s explained in more detail later. Again, the story was a good run around, and at two issues the characters were at least a little more fleshed out.

So in four adventures the Doctor has gained three companions, and they work surprisingly well as a group. I prefer the longer-form storytelling to these mini-stories with a linking arc, but it’s still a good intro to Alice and co.

The Doctor argues with a talking pig mascot, because why wouldn’t he?!

The main bad is as I’ve mentioned: the length of some of these stories. They do a good job in the first story of establishing Alice, but after that it’s all a bit of a blur. John Jones and ARC are funny companions, in that they have good lines or fish-out-of-water moments, but they don’t have time to be established in any meaningful way. The same goes for the villains, SERVEYOUinc in general is a good overarching threat, but the people, especially August Hart, aren’t really established enough. Plus, pulling the “meeting out of order” trick twice in five issues is a bit much…

So it’s a good companion introduction story for Alice, but after that it’s a bit of a rush. Plus the art is very hit and miss, something that continues onwards in the 11th Doctor range…

Not your typical looking travelling companion, that’s for sure!

Beyond this clearly taking place after the 11th Doctor TV story “The Pandorica Opens / The Big Bang” given The Doctor mentioning he’s left Amy and Rory to have their honeymoon, there isn’t a lot. Well, given its four stories there are quite a few call backs between them all, but outside of these five issues, there isn’t much. The Doctor mentions loving libraries, except when they try to eat him, which is a reference to 10th Doctor TV classic “Silence in the Library / Forest of the Dead”… that’s something at least!

We end the Audio / Comic Companion Debut Marathon with a good example of a companion debut done right, it’s just a shame all that follows is a bit of a mess. It’s not without its moments, but it certainly deserves to be separated from each other in the score…

The Friendly Place, What He Wants… and Whodunnit / The Sound of our Voices: