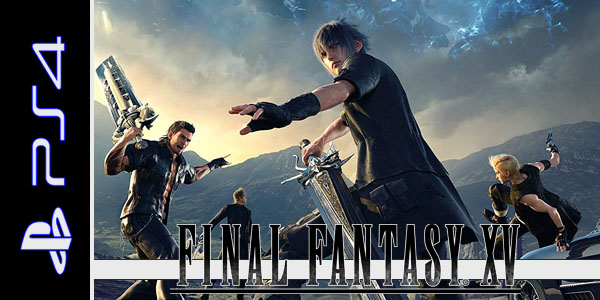 I actually had plans to review this game when I played through it in 2017, but I was focusing almost entirely on the non-gaming blog at the time (when they weren’t combined into one!) and ended up leaving it. Fast forward to today and I played through the quick “Episode Ardyn” DLC, the final piece of extra content for the game, and thought I’d make up for lost time. Happily I still had a bunch of screenshots saved! ANYWAY, Final Fantasy XV is a hard one to quickly sum up, it’s quite unlike any other game I’ve played, part open world RPG, part Japanese RPG, definite Final Fantasy looking character designs, but a very American looking world… It’s a bizarre blend, but one that surprisingly worked! Let’s take a closer look. 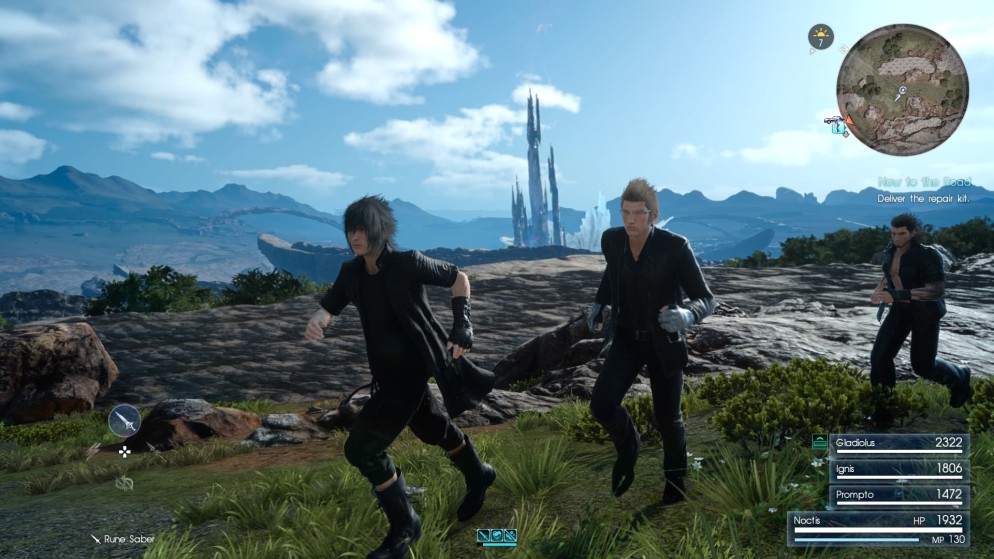 “Quick, run before Prompto finds us!”

Final Fantasy XV actually began life as a PS2 title named “Final Fantasy Versus XII” in 2006, before being changed to the Fifteenth mainline title in 2012. It finally saw global release on November 29th, 2016 for both PS4 and XBOX One.

Like all Final Fantasy mainline games, XV may well be the fifteenth game in the core series, but it has no connection to any previous games in the series, beyond a few creatures appearing in all worlds… 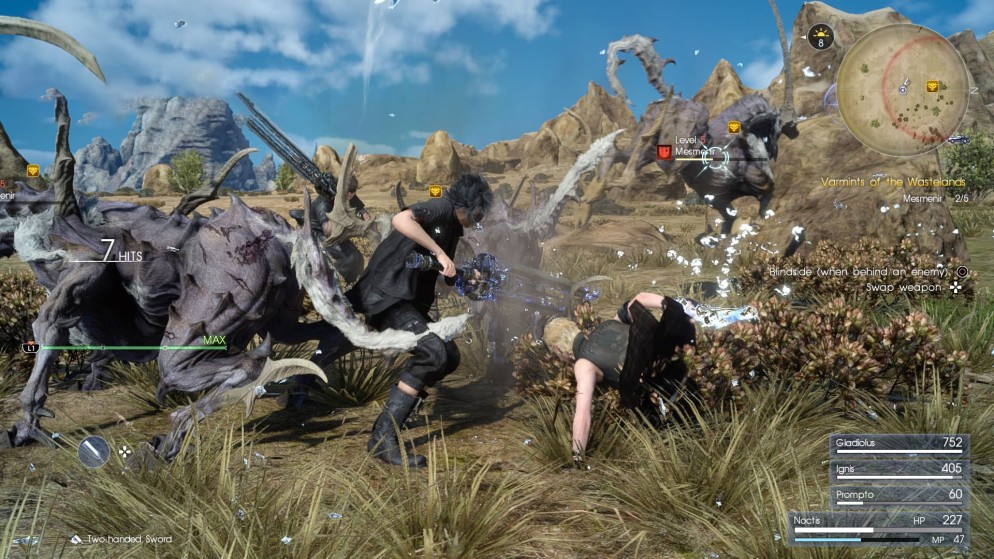 A chaotic battle scene, but you rarely lose track of where you are.

The core of Final Fantasy XV is actually really unique in that you play as the central character, Noctis, but all the while his three friends Gladiolus, Ignis and Prompto follow you around, running when you run, hoping into the car when you do, etc. It’s like what you always imagined the old RPG parties look like instead of vanishing inside the main protagonist and just popping out when they need to say something, and it works surprisingly well! It really helps give you a strong sense of friendship between the four of them as you battle creatures, drive around the landscape, and even camp, cook and sleep together (well, not together-together, in different tents / beds…) all the while they have little pieces of dialogue and quips that make it really feel like you’re watching four friends travel around with each other.

With open worlds come large maps, and FFXV is no different. Although at some points in the story (particularly later on) you’ll be locked to a linear story, for most of the game you can freely roam the world, with day-night cycles, monsters, hidden bosses (especially at night…) and secret dungeons / locations with loot to explore, as well as towns and cities with plenty of NPCs to talk to, and no end of side quests to get on with alongside the story missions. It was interesting to see so many western, open world RPG tropes mixed in with classic parts of J-RPG systems, especially as a lot of the location designs have a definite US feel to them, while others (and the character designs) are definitely very Japanese fantasy. 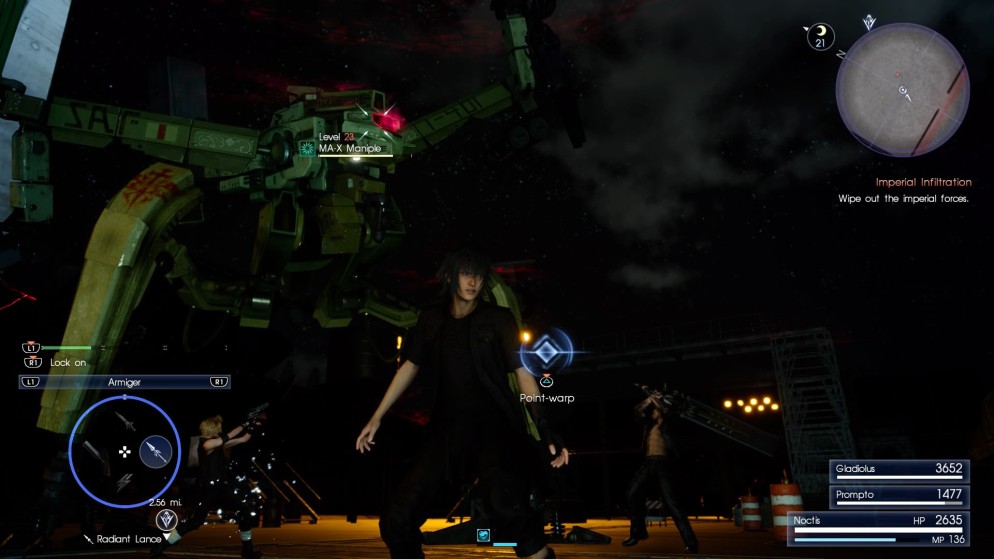 You spend a lot of the time travelling across this vast map in your car, which is sort of a fifth character in that you come to care about it, and get angry at it (though to be fair it was my fault for thinking the gas would last until the next city…) You can customise and upgrade the car throughout the game as well, with some later DLC and updates adding odd abilities, including the ability for the car to fly…

The battle system is more action than RPG, with no turns and all attacking. You again only control Noctis, with his unique ability to summon swords and throw them, before teleporting to where ever the sword lands. It’s good fun, and goes on to include magic and summons, so things still feel Final Fantasy-like. You can order your three companions around during the battle too, though their AI often do a good enough job if left unattended, apart from the odd stupid death. Occasionally you’ll get to an enemy base where it’s best to take out guards silently, but you can just go for an all-out battle. The bases often have a large mech boss, so it all feels very Metal Gear-y…

That’s Final Fantasy XV’s gameplay in a nutshell. Plenty to do, in fact the story often felt like it got in the way of the fun stuff, levelling characters, their abilities and pass times up as you take bounty missions featuring rare creatures, or fight off the cliché army of evil on your way to a specific town while listening to classic Final Fantasy soundtracks on the car radio. It’s a fun experience, that’s for sure. 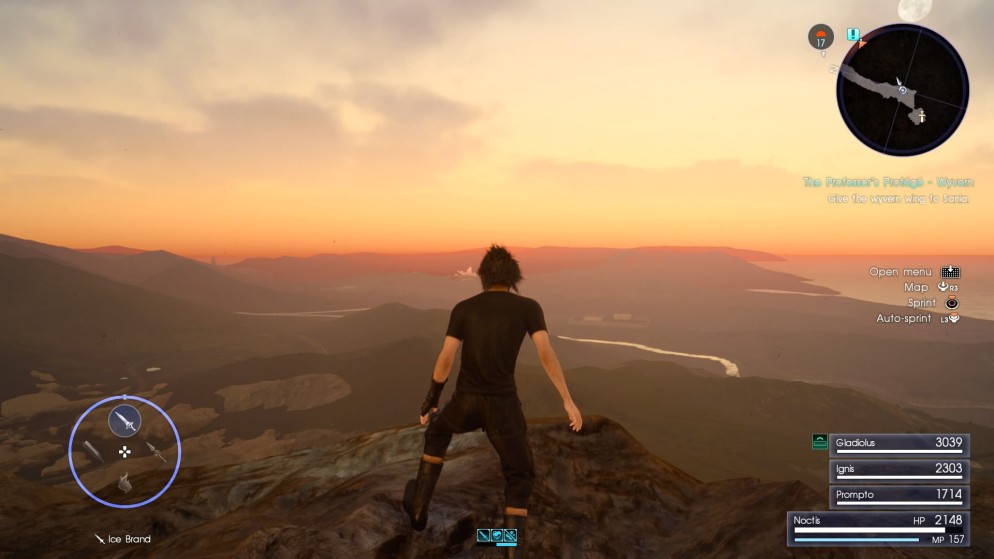 The old take a photo on the top of a mountain at sunset trick!

The graphics are, frankly, stunning. The locations have a near-photo realism to them, and the models are extremely detailed, especially on clothing and hair. The fact that some locations look like an American rural town, while others are straight from the realms of fantasy, yet it all feels like an actual lived in world is a real achievement from the design team.

The sound is great too. I know some don’t like the soundtrack as much as other games in the series, and I’ll admit nothing reaches the kind of iconic status as some entries, but there are some great tracks. When you’re out in the wild walking around there is a beautiful orchestral piece that plays called “Wanderlust” that I’ve listened to on its own away from the game before. “Bros on the Road” is another catchy tune, though in the opposite way of the slow and calming “Wanderlust” as it’s fast paced. Sound effects are fine, and the voice work for both languages is good, even if English Ignis sounds… too English? I don’t know, it sounded off to start with, but easy to get used to… 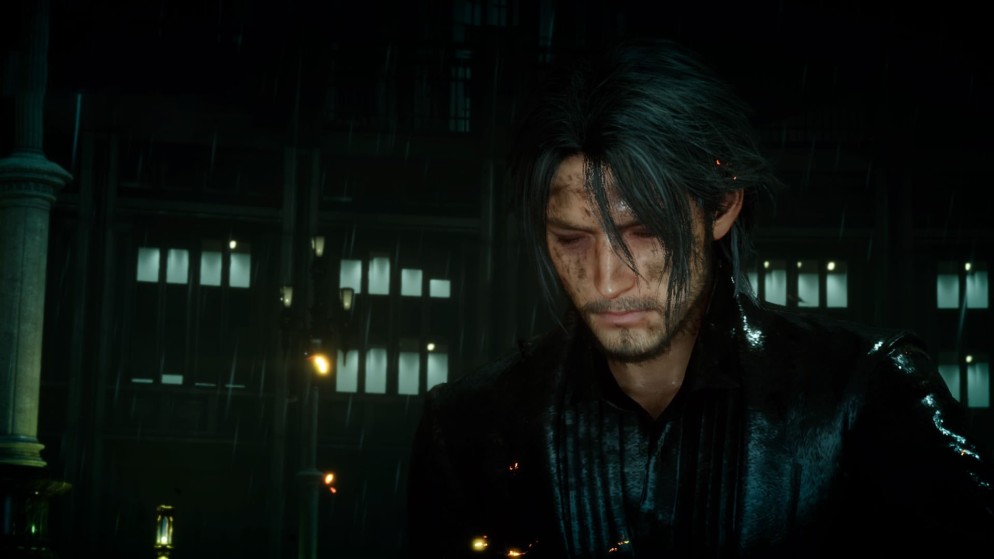 In the world of Eos, two countries are constantly at war, Lucis, who have a powerful crystal and a royal bloodline that protect the capital with a barrier, and Niflheim, who have a powerful mechanical army known as the “Magitek armours”. At the start of the game, Noctis, the Prince of Lucis, is away with his three friends, on the way to a political marriage, when Lucis is invaded by Niflheim and Noctis’ father is killed, making him the next King.

*Spoilers in the next paragraph!*

Noctis, Gladiolas, Ignis and Prompto then travel the lands of Eos in search of powerful old Gods (who act as summons) until they confront the man at the head of the Niflheim invasion: Ardyn, who is actually a would-be King and member of Noctis’ family… from some two millennia earlier! He’s immortal and was imprisoned for 2,000 years until he was recently freed, so he’s a bit crazy and all about that revenge. Ardyn successfully plunges the world into darkness for several years and Noctis vanishes into the Crystal, only to emerge (with a beard!) and free Eos from the curse, at the cost of his life.

The story is very bare-bones and mostly exists to give you a reason to travel across the map. There are some barely developed side characters that are quite fun as well (including a angsty guy with long white hair, because of course there is!) 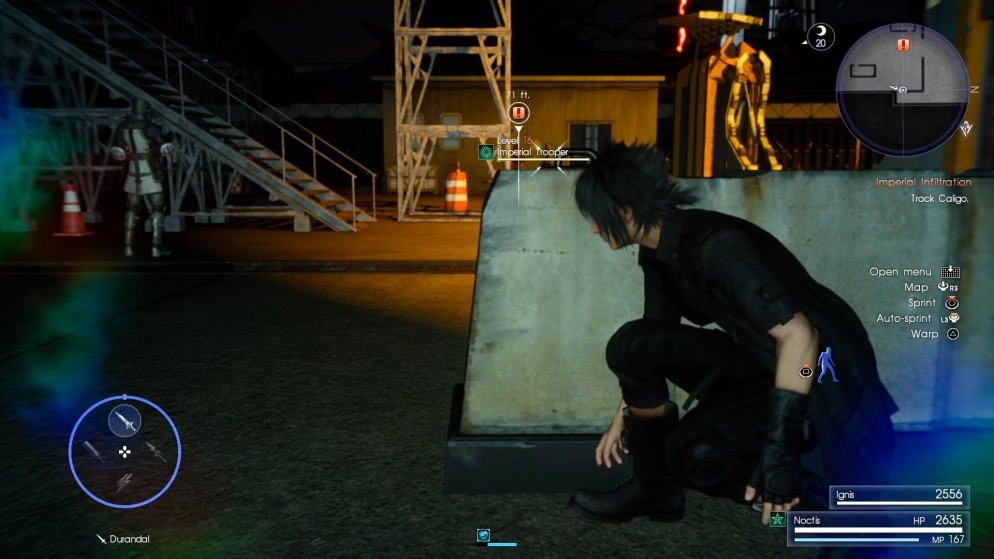 A screenshot of the DLC would have made sense here, but I only decided to do this review after I’d completed them. Oh well, who doesn’t like to look at Noctis hiding behind a wall?

Three pieces of DLC, each focusing on one of Noctis’ friends, was released over the first year, with each Episode fitting into the main narrative at a time when each character was absent from the story (for example “Episode Prompto” occurs at a time in the story when Prompto was thrown from a train and then reappeared later). Episode Ardyn, the latest and last DLC, focused on the lead antagonist’s backstory from 2,000 years ago, as well as when he was freed and taken to Niflheim. It’s an interesting story, with Ardyn having every right to hate his brother Somnus, even if it he had been infected with the “Starscourge” (I can’t be bothered to write THAT whole story…)

There was also a multi-player DLC, but I never played it, so… Sorry, not much to say! 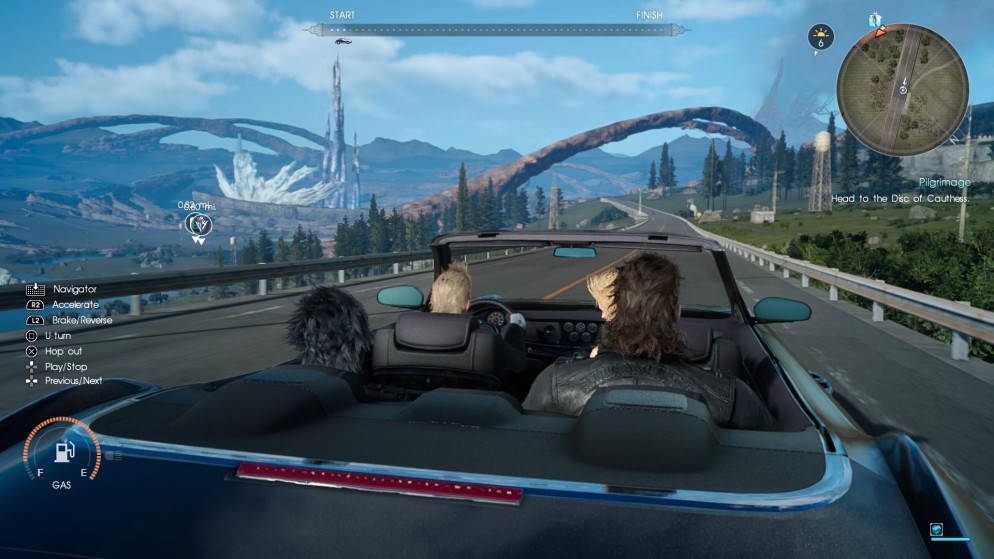 Despite it only being two years since I played it, this screenshot gives me fond, almost nostalgic, memories…

Final Fantasy XV looked good, but got mixed reviews, so I held off on it. When I finally brought it (quite cheaply!) I was unsure for the first hour or two, but then slowly fell in love with the locations, the characters, the soundtrack and most importantly, the gameplay. As I’ve said my only negative is the last stretch of the game when it becomes a linear story mode, as the story wasn’t all that interesting compared to the freer aspects of the game. Still, I’ll always have a soft spot for it, it may not be the best Final Fantasy, and Noctis may have crossed over into so many other games that he’s starting to become over-exposed, but it was a great two months of gaming…