It’s time to finish catching up (pretty much) with the Titan Comics releases by covering “Year 3”, starting with… a story that came out at the end of the run, but as it stars the Seventh Doctor I thought I’d read the stories in Doctor order, rather than release order. Operation Volcano shares a lot of similarities to the Third Doctor Titan story I raved about last year, especially with accurate drawings of the lead cast, but does the story hold up on its own? Well…

An unknown alien intelligence in orbit around the Earth. Astronauts under attack. A terrifying, mysterious landing in the Australian interior. The future of the world itself at stake. Counter Measures activated.

And the Seventh Doctor and Ace slap bang in the middle of it all! This is OPERATION VOLCANO!

This is one of opening panels of the comic, a classic flash-forward!

The Doctor (Sylvester McCoy) – The Doctor and Ace have intercepted a message for help from Group Captain Gilmore and his Counter Measures team, soon leading him and Ace to 60s Australia, and headfirst into danger…

Ace (Sophie Aldred) – Ace was excited when she heard they’ll be visiting the Counter Measures team again, because that always guarantees not to be boring, if nothing else!

Group Captain Gilmore (Simon Williams) – Gilmore is the head of Counter Measures, UNIT before UNIT was a thing. He has become alerted to a possible alien spacecraft found in Australia, and as such has made sure to alert The Doctor…

Professor Rachel Jensen (Pamela Salem) – Professor Jensen’s research into Artificial Intelligence lead to her being forced to join Counter Measures, which is often a source of frustration, but equally can be a source of wonder and amazement…

Dr. Allison Williams (Karen Gledhill) – Allison started off as Professor Jensen’s assistant, but she has proved herself more than capable on her own as well.

Clive and Emily – Members of a hostile alien race that has plans to assimilate themselves into Earth society and eventually take over, after having crash-landed due to their pursuers: the Markarians.

The Markarians – A snake-like species that are able to communicate with Earthlings via biting their necks. They have been tracking a hostile alien force on Earth for many decades now, sadly for them their foes have the ability to blend into other cultures, making them very hard to find…

One of the stranger looking guests on board the TARDIS!

The main thing that jumps out at me is the artwork, which is dead-on and of high quality throughout the story. Secondly the dialogue is also very of-era, which makes sense given the writer is Andrew Cartmel, former head writer during the Seventh Doctor’s TV run.

As for the story itself? Very good, I’m happy to say. At only three issues it’s shorter than the other stand-alone older Doctor stories, but it crams a lot in. Two alien species have been playing cat and mouse for countless years, one assimilating into the Earth population and gaining influence in order to take over from within. The Counter Measures team are soon called over to Australia to view a large alien spacecraft that had been uncovered thanks to a nuclear testing site being on top of it, leading to Gilmore calling in Ace and The Doctor. We soon get spies, double crosses and a few good scenes of a very Bond-like hidden base, including getting invaded by the good guys repelling down ropes, so very 60s spy, that’s for sure!

The story is framed with several flash-forwards, including a dazed Captain Gilmore, with long hair and beard, being found on board the large alien space craft high above Earth in the present day, which was a fun “how did he get to this point?” storyline that played throughout the strip. The bad guys defeated, The Doctor and Ace drop the good aliens back off home, and everything is good and cosy.

The two lead villains, and the two Counter Measures ladies I don’t care about.

I’ve never really been a fan of the group later known as Counter Measures. I’ve always found them boring, from their TV appearance and in the few Doctor Who audios they’ve appeared in, and seeing them in the nicely drawn and coloured “flesh” hasn’t dissuaded my opinion. They’re not bad actors or anything, but I just find the actual characters to be really dull.

There is a bonus strip in the Graphic Novel called “Hill of Beans” that was drawn by the actress who played Mags the werewolf (oddly enough, after her recent return to the series via audio!) and… yikes, you can tell she isn’t a professional artist, that’s for sure. I’d say “not that I could do better”, but I could probably match it, if I’m honest! The story isn’t too bad, and explored Mags a bit more, but I just couldn’t concentrate or take it seriously enough to care due to the weird doodles. Thankfully it’s not the main attraction and just a bonus kind-of thing, so I won’t give it its own score or anything…

(note: there is also a First Doctor bonus strip that was really good, but I’ll probably cover it independently from this, given this page so Seventh Doctor heavy!) 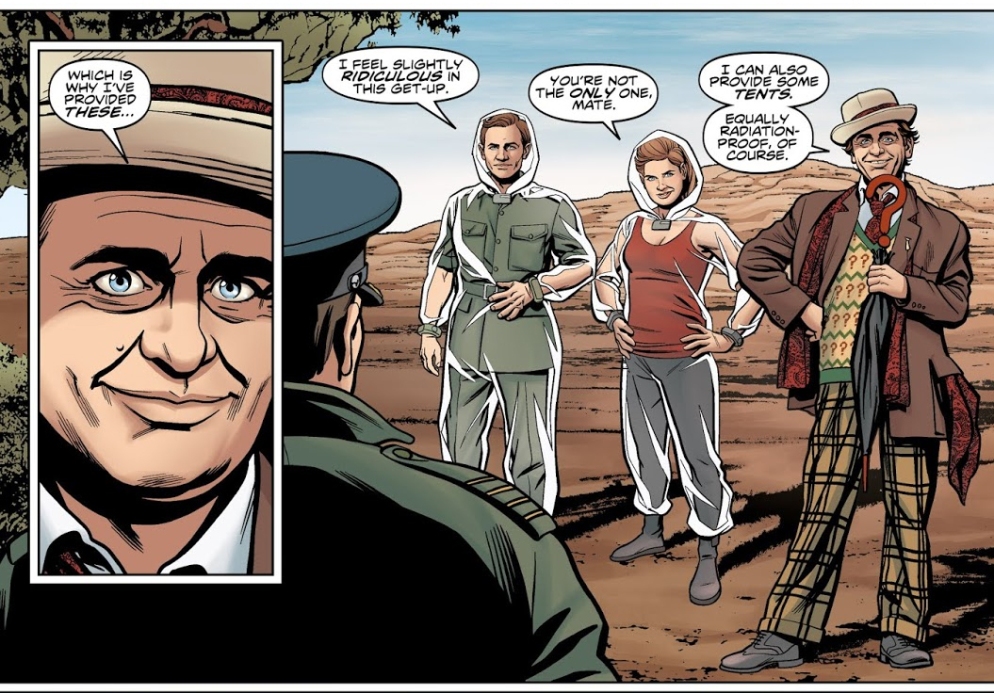 Gilmore, Rachel and Allison all first appeared in the Seventh Doctor TV story “Remembrance of the Daleks”, and have made appearances in the books and audios since, including their own spin-off series… though I wouldn’t expect that to be covered on this blog…

Apart from that, it was all pretty self-contained, though it had to be said that it was definitely early in the Seventh Doctor’s run, given Ace’s personality…

Operation Volcano was a good story, elevated thanks to gorgeous and always on-panel artwork. While the Counter Measures group didn’t add anything for me, it didn’t stop the fun story from twisting and turning across its three issues. A good read.