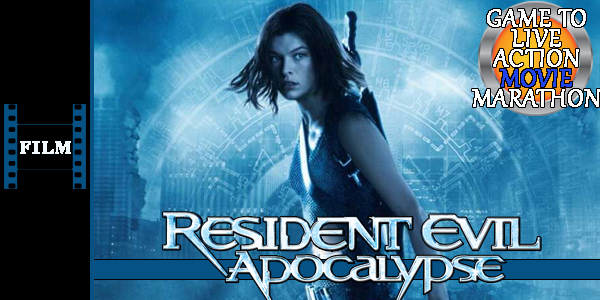 So, we reach film #2 in the Resident Evil movie franchise, and this is where my experience ended. I put this movie on after being pleasantly surprised with the first one, and switched it off half way through. While the second game (or even the third that this is clearly more based on) was still more horror than action, this is just action, and action with a super-powered heroine at that. Still though, is it any good at all now, with fresh eyes and a need to sit through it no matter what? Let’s find out!

A deadly virus from a secret Umbrella Corporation laboratory underneath Raccoon City is exposed to the world. Umbrella seals off the city to contain the virus, creating a ghost town where everyone trapped inside turns into a mutant zombie. Alice, a survivor from Umbrella’s secret lab, meets former Umbrella security officer Jill Valentine and mercenary Carlos Oliviera. Together, they search for a scientist who might be able to help.

Hey, it’s Jill! She looks quite a bit like Jill from RE3, that’s… cool?

Erm… You know, I’m honestly struggling here. I mean, I wasn’t really thinking of completely crapping on this film, but here I am the following day looking back, and I can’t really think of anything positive. Jill was wearing her Resident Evil 3 outfit… that was kind of good, I guess?

Okay, so here we go: Resident Evil: Apocalypse is an old-fashioned action film, but instead of an Arnold Schwarzenegger or Sylvester Stallone at the centre, it has Milla Jovovich, who may have the same lack of acting the other two do, but can’t pull of the bad-ass-ness needed to suspend your disbelief. The worst part is they actually cast two people from the games, Sienna Guillory as Jill Valentine and Oded Fehr as Carlos Oliveira, and while the later gets a few moments of cheesy slow motion gunplay action, the movie Jill is constantly shown to be incompetent against the holy god that is Jovovich’s Alice. I remembered the exact point I switched the film off the first time: Jill, a generic made up S.T.A.R.S. member and two civilians are trapped in a church with some Lickers, and after a few relatively tense moments of creeping around, Jill and the other guy unloads all their ammo with random fire like a pair of idiots, and then get ready to be killed before Alice arrives, crashing a motorbike through the church window in slow motion and takes care of all the Lickers with no effort and lots of really cringey “looking cool with guns” moments to camera. Man it was embarrassing stuff.

It only got worse though. Alice now has superhuman powers, so this wasn’t the last case of her protecting everyone else with her “badass-ness”. Hell, Jill was protecting a little girl from zombie dogs in a kitchen (in a fun scene reminiscent of Jurassic Park), she turns on the gas, and as she leaves with the girl throws a match into the kitchen… only for the match not to go off. But it’s okay, because Alice was coincidentally standing in the next room with a lit cigarette, so SHE throws it in, protects the girl and watches as Jill gets awkwardly tossed into a table because she’s obviously shit compared to cool Alice. It’s like W.S. Anderson had to put some characters from the games in, but resented another female character being in the same film as his beloved Jovovich, so made sure everyone watching knew how apparently so much cooler she is…

Speaking of game characters appearing, Nemesis makes his film debut as well. To be honest, while sometimes he looks like a crap puppet, he’s not actually that badly realised, using his rocket launcher and even spouting a “S.T.A.R.S.!” at one point early on. The issue comes from the final fight, where Alice fights Nemesis hand-to-hand, complete with attempted block and strike sequences out of some sort of martial arts movie, only really bad because Nemesis is a big slow-moving monster and not only can he barely move but it also just looks silly because its supposed to be an unstoppable killing machine. Alice wins relatively easily (of course!), but refuses to kill it because she’s only just now pegged on to the fact that her friend / potential love interest from the previous film, who was carried off for “the Nemesis project”, was actually Nemesis! …. Shocker.

You see it’s funny because he’s a f**king twat.

This leads to a final fight … against armed Umbrella soldiers and helicopters, because screw facing mutated horrors in a Resident Evil film. There is a recreation of the opening cinematic of Resident Evil – Code: Veronica, with Alice dodging helicopter fire through a bunch of glass windows and then somehow dropping her handgun and then falling and catching it before the weapon hits the ground. It looked over-the-top and silly in the CG opening, and looked… at home in the crazy surroundings of this film. Nemesis lends everyone a hand before being killed, and Alice is seemingly killed herself in the helicopter escape (as Raccoon City is nuked, by the way) and is recaptured by Umbrella, who seemingly make her gain psychic abilities on top of her super strength and speed…

Other annoying things: scenes of zombies shuffling along is done with a weird blurry, low-frame rate effect which is just distracting and annoying rather than effective, a black guy who carries two golden “D.Eagles” and acts and speaks like the most stereotypical “funny black guy sidekick” you could ever imagine (and SURVIVES for some reason) and a general feeling of cheapness in the sets and set pieces, despite presumably having a bigger budget than the previous film. A lot of this is due to the director, I guess. Paul W.S. Anderson wrote the screenplay, but handed directing to Alexander Witt, creating an unholy union of poor and biased writing with really poor directing…

Nemesis is mad at his dentist’s failure to warn him of … sudden lip reduction…?

Resident Evil: Apocalypse is pretty awful. Bad script, a unhealthy obsession with the lead character to the point where she becomes an infallible and therefore hard to route for teenagers-idea-of-bad-ass, and a general distaste for the games the film comes from, including several scenes where live action versions of game characters are shown specifically to be idiots in comparison to film-exclusive Alice. Still… Apocalypse, so this is the last one then right? End of everything and all that… *sigh*… right?