After the sad passing of Paul Darrow, the full-cast Blake’s 7 audios got put on hold while they re-wrote the scripts and such. Seemingly though, that must have been mostly for Part 3 as this boxset was full to the prim of wonderfully snide and sarcastic Avon! Hooray! All four stories were really good, and one was straight up great, so let’s take a deeper look, shall we?

The dying Liberator arrives in orbit of Eloran, a world Avon believes could offer respite from their current trials. All that stands in the way is a primitive society, a charismatic leader and the fracture lines threatening to destroy the crew from within.

Episode 1, “The New Age”, picks up where we left off, with our crew desperately clinging on to what’s left of their ship. They soon arrive at their destination: Space World, the System owned machine planet seen previously on the TV series episode “Redemption”, and their best hope for tech to repair the ship. It doesn’t go to plan, and what’s left of Space World soon crumbles to nothing. Avon then reveals a backup plan: Space World was the centre of three planets, all of whom were enslaved by The System, and therefore could also have System tech that could repair the ship. This is the set up for the rest of Episode 1, and the two after it. It’s a good idea for a little self-contained boxset within a larger story arc.

The rest of episode 1 has the crew beam down to the nearest of the three planets: Eloran, and sees a new primitive society living outside of the massive tech-heavy cities that post-System riots have turned into uninhabitable wastelands. Vila quickly falls for charismatic leader Vaulkris and her promise of a stress-free, simple life, so long as he and his fellow crewmen don’t open the System Bunker on a nearby hill. Of course Avon arrives and insists that Vila open it, eventually succeeding, leaving Vila to curse his “friend’s” name. They enter the bunker, a nice charming young lad gets accidentally electrocuted to death, simultaneously destroying the needed power cell, meaning nobody got what they wanted. Vila eventually returns to the Liberator, once again depressed at his current state of life. It had some great dramatic moments in the second half, and a brilliant performance from Michael Keating as Vila.

“Happily Ever After” is the second episode on the set, and it features Avon and Tarrant heading to the planet Zareen, a planet where a “Mind Web” keeps all the residents mentally connected and gives them visions of the future. The ever popular Queen Janylle will meet Tarrant and the two will get married and have a lovely life together, that is what everyone foresaw, which comes a shock to both Avon and obviously especially Tarrant. The episode soon narrows to focus on the latter’s struggle of knowing he’ll have a peaceful future away from the Federation if he goes with it, against his wish to take down the Federation for good. There are some fantastic scenes between Avon and Tarrant, for the second episode in a row the de facto leader is having to talk one of his own crew out of a peaceful life in order to help him. In the end there are some time travel-ish shenanigans as Tarrant gets a vision of a future where he sees Avon, who crashed in Federation Pursuit Ship after having been captured and held for 10 years, tell him that what he needs is on a planet called Hyperion. Tarrant takes the advice of future-Avon and leaves Zareen alongside Avon, new destination in hand, but still wondering if he really should have left that destiny behind…

The best story of the bunch gets the best cover too! Hooray?!

Episode 3 sees the next duo of Cally and Dayna head to the final of the three planets, in “Siren”. This seemed like a bit of a come down after the previous story, but it’s fine. This former System world still has a few of the converted populace known as “Altas” going around and allies Mida and Veskar are doing all they can to survive, which given the latter is a former System guard who struggles to not give in to his old conditioning, is a problem. Cally and Dayna arrive, but soon Dayna begins to give in to her old conditioning too, and Veskar is recaptured. They do eventually teach one of the last Altas to think and feel emotion again, leading to a final confrontation that doesn’t have as much death as you’d think! It’s well written and acted, and definitely worthy of high praise, it just followed something I really loved.

Episode 4, “Hyperion”, sees the whole crew head to the planet (or space station above the planet, as it turns out) to meet with Dr Selene Shan, a scientist who stayed on the third planet that Cally and Dayna visited. The two leads meeting seemed like too good of a chance, and sure enough, the ring around Hyperion soon starts recharging the ship, showing it was formally a System structure that had collapsed… or so you’re led to believe. While there are some good moments involving Cally and a friendly mechanic, and most of the crew having to deal with an arrogant Federation Commandant, the highlight is Avon and Dr. Shan’s verbal duels, one that ends with Shan stealing Avon’s teleport bracelet and leaving him on an exploding space station! The Liberator is repaired but now under the control of an alien race that once rivalled The System. To be continued! Great cliffhanger, and obviously written to excuse Avon from the next boxset, sadly… 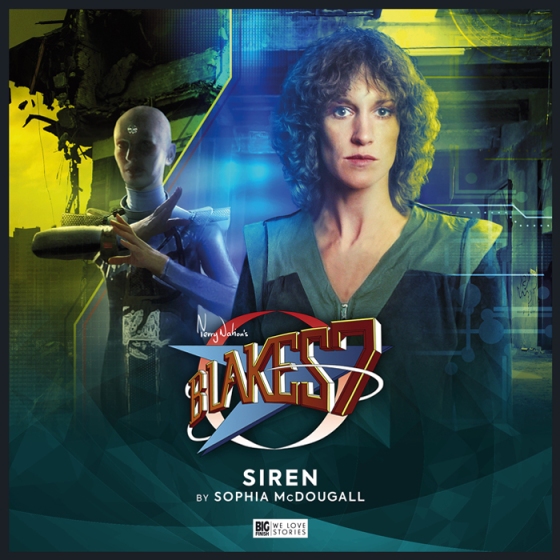 This wasn’t actually bad, I’m just going through the covers in order…

Honestly? Nothing, really. So rare nowadays to get a release like this, but all four episodes had really great scripts that did good things with the existing characters.

I wonder how many sci-fi properties have used “Hyperion” as a location or spaceship?

Blake’s 7’s full cast audios are nearly at an end, but if Box 2 of Restoration is anything to go by, they’ll be going out on a high. If you have even the slightest interest in Blake’s 7 then I can’t recommend this enough. Let’s hope they stick the landing!