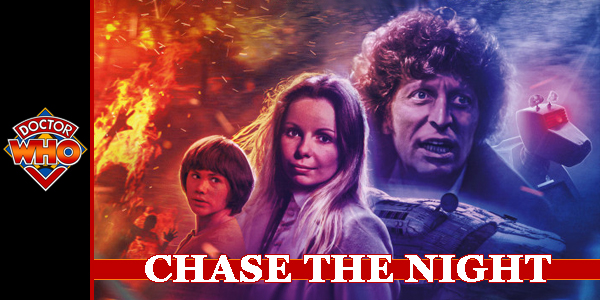 Unexpected hit alert! Chase The Night was a genuine treat to listen to, with the still-fresh quartet of The Doctor, Romana, Adric and K9 finding themselves on a most unusual planet with a strange twist involving a train and the planet’s rotation. Want to know more? Well, read on then!

The TARDIS lands in an alien tropical rainforest at night where the Doctor, Adric and Romana discover a set of rails stretching through the undergrowth. These tracks carry a long-crashed spaceship that’s been converted to run along them like a train.

The ship has to keep moving because only the night-side of the world is habitable. The sun on the day-side burns so hot that everything on the surface is turned to ash.

But the stress and strain of the constant movement is beginning to take its toll on the ship. Parts are starting to break down, and the relentless heat gets ever closer – but the greatest danger may be on the inside…

Love this cover, especially the use of colour, even if you’ve got to wonder why Romana is looking so happy about the situation…

The Doctor and co land on a planet where they believe a CVE was detected near, their only chance to get home. Sadly for them, the planet itself is hostile whenever the sun is out, so much so the star literally flashburns the entire surface as soon as it rises, the planet’s survivors living life on a train that is constantly moving at just enough pace around the sphere that they always stay on the night side. It’s such a great idea, and thankfully they do plenty with it too!

The pilot, Dena (Jane Asher), is cold and calculating, but not evil. She willingly locks small portions of her people out of the train if the train is starting to slow down, and if you commit a crime you’re tied to the railroad track silent movie style and left to burn (or get ran over by the train!), but it’s all so the train can keep going, and the majority of her people can continue to live in what counts as peace. The head engineer Terson (William Gaminara) is struggling with the truth that the train’s engine is dying, and there is nothing he can do but keep “taping up the problem” until the tape no longer sticks.

As if this wasn’t bad enough, a mysterious fungal spore starts turning people into raving mad zombies who constantly try to leave and walk into the sun. So, as you’d imagine, plenty for the main cast to get caught up in! The Doctor and Dena are a great at playing off of each other, The Doctor always bad mouthing her sacrificial logic, and Dena always at odds with the fact that The Doctor could be useful with repairing the engine, but at the same time she hates him. Adric goes outside with some low-tier Train… people…? … and ends up infected by the spores, and Romana darts between the engineering room and Adric’s bedside. Lots of great scenes, and a cliffhanger where The Doctor it literally tied to railroad tracks with a train on-coming. The original cliffhanger, you might say! *grabs lapels*

The story is great at building tension and adding new layers and wrinkles just as some start to wear thin. In the end it turns out the forest itself is some sort of gestalt psychic entity and the spores making people walk into the sun was it trying to save the people on the train by having them die and become one with itself. In the end the train is a lost cause and the people on the train accept their fate and… die. Sure, The Doctor briefly consults with Engineer Terson, confirming they have become part of the forest, so… sort of happy ending? Either way, it was a great two hours!

This is quite the double bill of stories, in the end…

… Nothing really. Although it does feature an appearance of grumpy and tetchy Romana at the start of Episode 1, but at least that soon vanishes…

Chase The Night came out of nowhere to be a huge hit with me, and seemingly a lot of other people as well. Given its often tied to a boxset with the good Purgatory 12, I’d say “The Fourth Doctor Adventures Series 9 Part 1” is one hell of a deal, and frankly I’d gladly pay boxset price for this story alone. A must buy.