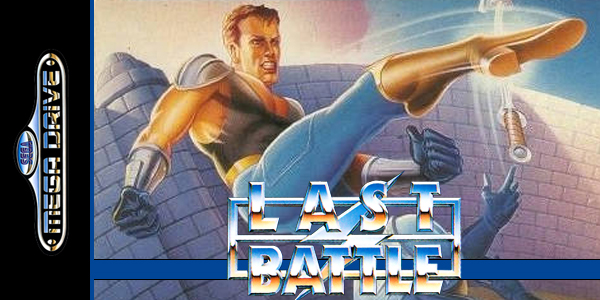 Last Battle is a strange game to start, I admit. Trust me, this isn’t one of those “I think this game gets a bad rep, I really like it” reviews. I dislike it… immensely, and because of this I thought it would make a good first review because there is plenty I can say about it, and therefore get a good hang on this whole thing. I didn’t want my first review to be all gushing about something with little criticism. So, let’s begin! 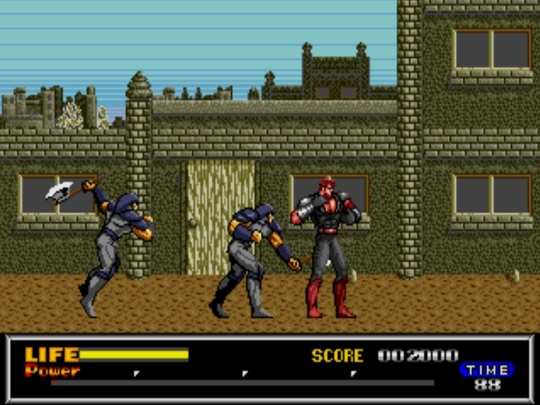 Our lead protagonist… getting an axe violently shoved up his arse.

Last Battle was released here in the UK in 1990 for the Sega Mega Drive, with a Commodore 64 and Amiga release the following year. The game is actually originally called “Shin Seikimatsu Kyūseishu Densetsu Hokuto no Ken”, or “New Legend of the End-of-Century Saviour: Fist of the North Star”, and is based on the manga / anime of the same name (well, the Fist of the North Star part), but was changed over here due to licensing issues. I don’t know what the issues were, but “people don’t know Fist of the North Star over here, so what’s the point in paying for the license?” would be my guess.

The story is actually quite close to the chunk of manga / anime that was covered in the game, though Kenshiro is now Aarzak, Bat and Lin, are now Max and Alyssa, and so on. The sprites look pretty much the same, although some bosses have been recoloured to look like mutants rather than people, and, most recognisably, all the gore that the series is known for has been removed. Instead of exploding with each punch or kick, the enemies simply freeze in the frame of motion before the explosion happens in the Japanese version, and fly off screen like Poochie returning to his home planet (Simpsons reference, sorry.)

Funnily enough, this wasn’t the first time this had happened, a Fist of the North Star game on the Master System had been released in English speaking territories under the name “Black Belt”, and I also owned it, though it’s not quite as fun to talk about. I’ll get to it. But it is funny to think that before I even knew about manga and anime, I had played two (awful) games based on one.

Yeah… this is going to end well…

Here we have the main problem with the game… the game. One button is for a short-range punch, one is for a short-range kick, and the third is for a very slow jump. The controls are very awkward and clunky, and trying to jump over obstacles? Forget about it, it’s too unresponsive. There’s a map where you can choose where to go, ranging from boss fights to more regular scrolling levels, but personally it’s a choice between a short blue boss who I can’t beat at all, or a couple of different paths leading to an underground level filled with flying axes, arrows, swords and boulders that is a nightmare, and to make matters worse it’s a maze! Forget finding your way out because you’ll be killed long before you find the exit.

A meter at the bottom of the screen fills up as you kill enemies, and at several points you “level up” by removing your shirt, and you get given quicker and stronger attacks. Doesn’t help avoiding a screen full of spinning axes though! Here is the real problem, and I mean game-breaking problem: you only get one life. ONE. No continues, no passwords. You die once, you’re back to the title screen. Sure, your health fills up a little bit per each enemy killed, but it’s not enough. Not nearly enough. I’ve played 8-bit “completely unfair due to coming from the Arcade” games which were more generous (and fun…) 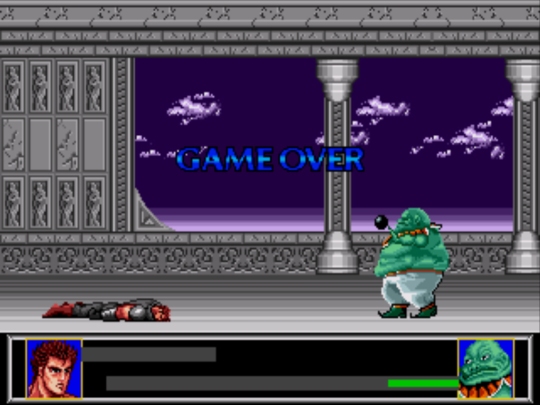 An all too familiar screen…

Even for a game early in the systems life, it looks rough. The sprites look decent, but the animation is poor, and the backgrounds are undetailed and scruffy. Sound-wise, well, the sound effects are pretty bad, they have that classic Mega Drive sound to them, but they given no sense of someone punching or getting punched. The music is sometimes annoyingly catchy, but in a “I don’t want this tune in my head!” kind of way, rather than a want to listen to it isolated kind of way.

When I got the game, my Mum had saw it in a car boot sale, and brought it for me because it was really cheap (and probably because the cover features someone being kicked… “It’s the 90s so games = Violence!” and all that). It is the first game I remember just… not liking. It truly is the first game I ever stood back and said “this game is bad, I don’t want to play it any more”. Now, there are games I had played before hand that I’d say are nearly as bad, but I guess I was too young to care. This on the other hand was bad, and I knew it. 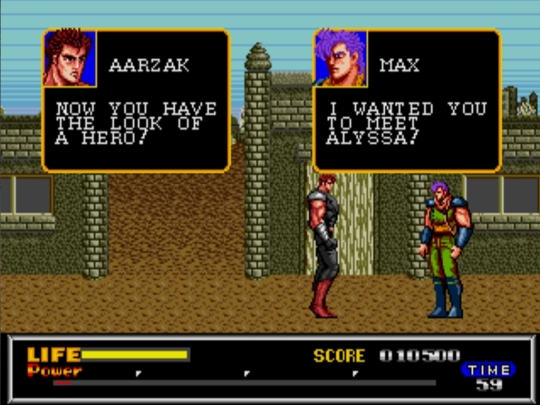 Looking back on it as I have the last few days, I can say that… yep, I was right, it was pretty bad. Sure, I got a lot further now than I did, but that’s because I felt like I had to get a better feel for the game this time, for the reviews sake. It wasn’t due to enjoyment of any kind. That being said, how you’re supposed to complete the game I have no idea. I was tempted to put in some sort of infinite life cheat to see later stages of the game, but I’ll be honest with you: I couldn’t be bothered. It wouldn’t have swayed my opinion, it would have just prolonged my agony…