Emperor of the Daleks is another continuity-fest from the early 90s pages of Doctor Who Magazine. Davros! Daleks! Abslom Daak! Two Doctors! Plus a whole chapter is colour! Let’s have a look at the six part story, plus the sort-of prequel “Up Above The Gods”, a single chapter story that fits in between chapters 1 and 2 of the story.

On the Dalek homeworld of Skaro, the Daleks place their creator Davros on trial for crimes against their race. Coming to his aid is the sixth incarnation of Davros’ eternal enemy the Doctor, who offers to take Davros to a planet where he can create new lifeforms for good if he is willing to change, Davros agrees. 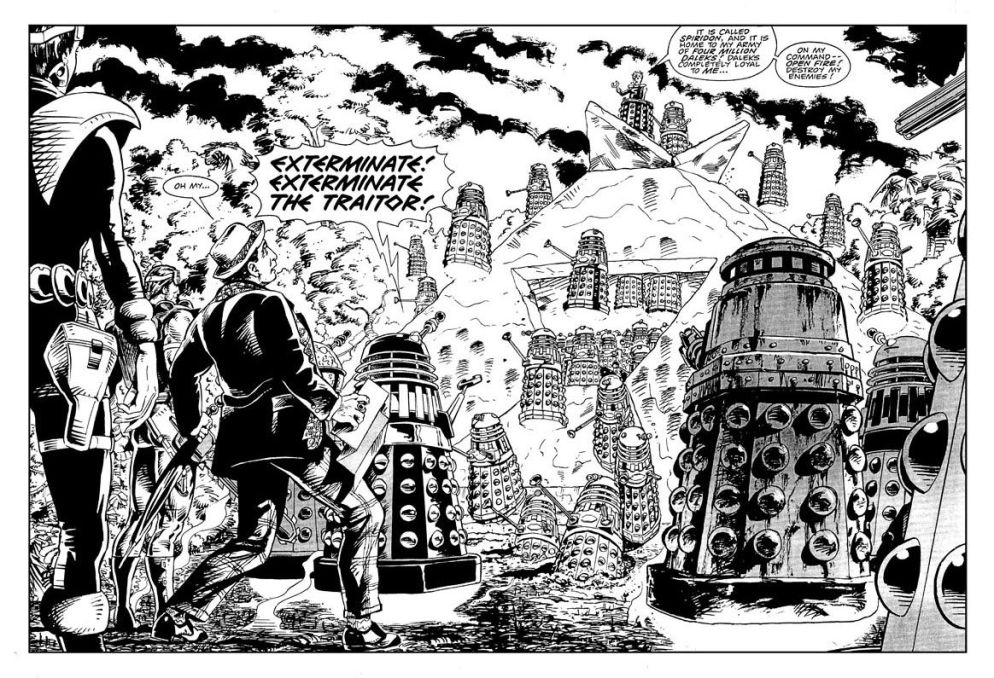 The Doctor (Sylvester McCoy) – Aware of his eventual defeat of Davros and The Daleks, The Doctor goes to great lengths to set up the events that lead to that outcome… which is a little complicated, but whatever.

Bernice Summerfield – Without much knowledge of what The Doctor is going on about, Benny is along for the ride anyway. Why not? Sounds like fun to me…

Davros – Creator of the Daleks who is now their sworn enemy. Davros is confused how creatures he bred to have no emotions or loyalty to anything other than pure Dalek could possibly turn on him…

Abslom Daak – A product of 90s comics, Daak “The Dalek Killer” is full of screaming, action and large shoulder pads. Plus a love for his wife, or rather still has love towards the corpse of his wife…

Dalek Emperor – The leader of the Daleks who sees Davros as not only an enemy of the Daleks, but a possible threat to his throne.

The Doctor (Colin Baker) – Multi-coloured coat and blonde curly hair, The Sixth incarnation of the Doctor appears a few times in this story as a vital link in his next incarnation’s plan. 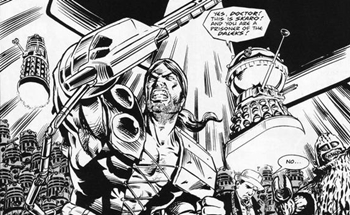 Ahh… Abslom Daak. Could he look any more “early 90s comics” than he does?

Seeing The Doctor, Benny, Daak and his old “Star Tigers” allies all go through a long, multi-planet adventure with and against different Daleks is a fun read, though only if you try not to think too much about it. The art is good throughout, and it’s fun seeing an early attempt at a colour chapter.

I did enjoy the interaction between Benny and Daak. Abslom is still obsessed with the frozen dead body of his wife that he believes can still be saved, and Benny is constantly telling him to get over it, with increasingly harsher and harsher ways as time goes on. Daak is as one-dimensional as they get, but this at least they made him a bit more … fun, to go alongside his 90s shooty comic self. Likewise, given Daak’s tunnel vision where it comes to Daleks, it was fun to see him chainsaw Davros’ chair in half at the end.

Davros and the Sixth Doctor have a lovely chat.

The plot, being the Seventh Doctor using his past self to make sure to set up the series of events that lead to Remembrance of the Daleks is a bit silly. Presumably The Doctor would just let things naturally occur because he saw the outcome first hand in Remembrance, though I guess he had no choice because he already remembers as his Sixth self being visited by his next body to tell him to set up Davros… so… I don’t know. The whole story is a celebration of continuity, but it’s so much that you feel your just going from one reference to the next without much story. Daak being brought back from the dead for no reason, returning to the planet Spiridon, these weren’t necessary in order to tell the story of how Davros ended up as a head in a Emperor case in Remembrance.

Up Above The Gods had a few brief moments of interesting dialogue between the Sixth Doctor and Davros, but in general it wasn’t needed. I didn’t need to see the conversation that set up Davros’ appearance on Spiridon, I had figured it out myself via the dialogue in the main story…

The full cover of the collected DWM comics graphic novel that used this story as the over all title.

Abslom Daak and the Star Tigers are from earlier Seventh Doctor DWM comic strips, including Nemesis of the Daleks, which saw Daak seemingly killed (but it turns out he was saved by the Daleks of this story in order to be used as a weapon). Davros is given access to the frozen army of Daleks seen in the Third Doctor TV serial “Planet of the Daleks”, although an alternate use of this plot thread was used by Big Finish in the audio drama “Return of the Daleks”. Both Emperor and Return feature the frozen Dalek army in different ways and are hard to combine into one continuity…

Hey, I guess that didn’t take as long as I thought. There you go…

While it was a fun “shut your brain off” read, I doubt I’ll be returning to this story. There isn’t much here that isn’t just someone seeing two TV stories and wanting to connect and bridge between them, but decided to make that bridge out of even more old continuity on top of everything else. Still… the colour page was nice…?