Although I normally don’t do “overall reviews” for series without a clear narrative throughout the series, Gundam falls awkwardly in between the two extremes. A lot of the episodes or smaller story arcs are stand alone, but the development of Amuro and Char, as well as the latter’s revenge against the Zabis, and their budding rivalry does go across the whole series. Plus the One Year War itself, although already underway when the series starts, is also sort of a running narrative. So let’s take an overall look at the original Mobile Suit Gundam series…

What would later be known as the One Year War is still raging between the Earth Federation and the Principality of Zeon, a nation based in a distant space colony. The Federation’s work on a new warship known as “White Base” has lead Zeon to attack the Side 7 Colony, an event that would alter the course of the war, as well as the lives of simple mechanic Amuro Ray and ace Zeon pilot Char Aznable… 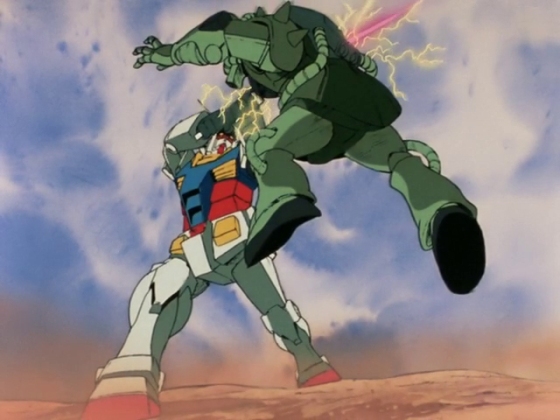 Amuro Ray (Toru Furuya / Brad Swaile) – The son of Earth Federation researcher Tem Ray, Amuro is living peacefully on Side 7 working as a amateur mechanic. When the war visits his home he finds himself in the cockpit of the prototype Federation mobile suit known as “Gundam”, and to his surprise he is able to pilot it well… which is handy for all the killing he now has to do! Hooray!

Char Aznable (Shuichi Ikeda / Michael Kopsa) – Formally known as Casval Rem Deikun, son of the famous speaker and champion of sovereignty Zeon Zum Deikun. Char wishes for nothing more than the death of the Zabi family, who plotted his father’s death and then used it as an excuse to launch their war of independence against Earth, even going as far to name themselves “Zeon” in tribute. As “Char Aznable” he has gained their trust as an ace pilot, though really he is biding his time, looking for the right time to strike back… although he is still no fan of Earth dominance, so killing some “Feddies” is a nice side mission for him!

Bright Noa (Hirotaka Suzuoki / Chris Kalhoon) – A simple Ensign at the time of the attack on White Base, he is left in charge of the warship when the other higher ranking officers are killed by the Zeon raid. He does he best to lead, including slapping some kids around who are having a strop due to the whole “they never signed up to kill anyone or fight in a war” thing… Damn softies!

Sayla Mass (Yo Inoue / Alaina Burnett) – Formally known as Artesia Som Deikun, the daughter of Zeon Zum Deikun, and therefore the younger sister of the man known as Char Aznable. She is one of the civilians who finds herself on board the White Base after the attack on Side 7, though she soon rises in the ranks due to there being so few people of any competence, and she has a logical head on her.

Kai Shiden (Toshio Furukawa / Richard Ian Cox) – A selfish and cowardly arsehole who (sadly for those who disliked being around him) turned out to be a good pilot when he was among the evacuated civilians from Side 7. He pilots the Guncannon, a prototype Federation mobile suit that is less unique than the Gundam. All that, however, doesn’t change his snarky attitude…

Hayato Kobayashi (Kiyonobu Suzuki / Matt Smith) – One of the civilians who was evacuated onto the White Base. He is desperate to help out and ends up being a co-pilot in the Guntank, a … tank with a mobile suit body and head stuck on it. Handy!

Ryu Jose (Shozo Iizuka / Ward Perry) – The kind and gentle giant type, he helps Hayato in the Guntank, as well as pilots the Core Fighter spaceship. He is so nice and loved by the crew that he is clearly not going to die later on in order to inspire them. Nope! Not at all.

Slegger Law (Tessho Genda / Bill Mondy) – The Han Solo style cocky pilot who thinks he has a way with women, Slegger joins the White Base crew during the fight at Jaburo.

Lalah Sune (Keiko Han / Willow Johnson) – Extremely powerful Newtype who’s being trained as a pilot with the help of Char, who she has fallen for. A chance encounter with Amuro leads to problems, however…

Gihren Zabi (Banjo Ginga / Hiro Kanagawa) – Oldest son of Zeon’s leader Degwin Zabi, Gihren wants to take control of the Principality and use their power to rule over those he deems the lesser races. This racist skew to an established plan leads people to compare him to Hitler, and by people, I mean including his own father!

Kycilia Zabi (Mami Koyama / Michaelle Porter) – Daughter of Degwin, Kycilia is in charge of a large portion of the Zeon fleet, as well as their moonbase. She is suspicious of Char and his motives, but has decided to keep him close out of curiosity…

First thing’s first, the impact Gundam had on anime, inventing what we now call “Real Robot” shows, where battling mech aren’t superhero like, and it’s more like a real war (although to be honest, you don’t really hear that phrase much anymore…) So if nothing else it’s worth watching for historical reasons, though there are many more reasons to watch anyway!

Amuro Ray is a fascinating character to watch develop. He starts off as quite unpleasant and spoiled, being selfish in the face of defending his friends and allies by using the Gundam he acquired. Slowly but surely he “becomes a man” and a fine soldier, even giving talks and helping with strategy. Given he ends up sending his mother into a fit of tears, it’s up in the air as to whether this transformation is actually a good thing, or whether it’s an example of the horrors of war and how it can change such a previously good-natured (if a little selfish) person into a calculating soldier, one who doesn’t blink when he takes out a rival soldier on the field.

Although Amuro is the central protagonist, the best character is definitely Char Aznable. He starts off as just the ace pilot who clashes with Amuro and the White Base, then we get to the battle with Garma, where he allows the Zabi family member die as part of his revenge. Slowly but surely he gets multiple layers added to him, the relationship with his estranged sister and his true identity, his falling for Lalah and how he then seemingly drops his revenge for a more noble goal, and his general rivalry with Amuro, which starts off as just “he actually managed to best me, how dare he?!” to pure hatred. He’s a properly fascinating character, a fact that continues throughout his later appearances as well.

It’s actually quite amazing how the rest of the cast are either really interesting, or really one-dimensional. Bright Noa and how he deals with being thrust into command, Kai’s snarky arsehole character slowly becoming likable, Sayla and her connection to Char and how she slowly gains skills to help, Ramba Ral and his “good and honourable man on the enemy side” role and Dozle Zabi, who is a member of the Zabi family but values the lives of his wife, child and even his men over his own, are all really good… as for the rest? Take a look at the Bad section…

Like most Gundam shows that follow it, it does a good job of making sure to paint both sides as equally capable of horrible and good things. Yes, Zeon is definitely just the Nazis, but there are moments where Zeon soldiers make sure to help Earth civilians, and likewise where Earth Federation troops do bad things. After 42 episodes you do feel like it’s a big deal as the show ends and the One Year War comes to a close. It’s a testament to the story telling, despite how loose a lot of the “arcs” are.

Although the animation is… extremely dated, to be fair, the fight scenes are often really good. The scenes of grand warfare towards the end of the series are also very fun to watch. Bright and colourful, though sadly not very detailed. For 70s animation though, you can’t complain.

The left side of this picture is the bad, not the two on the right (although Bright looks a bit odd, but that’s just an animation error…)

I mentioned in the good how the characters are either really interesting or really dull? Well, there are a lot that are dull. Fraw Bow and Mirai are just there to be women and gain the attention of men. Hayato is a bit whiney and pathetic and doesn’t really get any redemption, Ryu is a nice guy who is then killed off and replaced with a generic Han Solo copy in Slegger Law, and the villains? For the most part they may as well be twirling their moustaches and laughing maniacally. They’re just evil for the sake of being evil, apart from the few mentioned in the good.

I don’t get why Tomino thought having three children pratfall and giggle throughout the horrible warzone was a good idea, but it wasn’t. They add nothing but annoying scenes to the series, and it becomes increasingly illogical the more time passes and the crew don’t drop them off somewhere.

It’s fair to say the first half of the series is extremely slow, with single-episode stories that are often very similar, and the characters that eventually develop into interesting ones are still in their obnoxious and unlikable phases.

Here comes the GMs! … and balls. I mean, Balls, sorry.

A good sum up is that Mobile Suit Gundam is very much a “stick with it, it gets better” kind of show. Some characters start off unlikable, but they grow on you (or, admittedly, they never do…), while Char Aznable is likable from the start and only gets more interesting. The animation and artstyle are outdated, but doesn’t take away from the show (especially the cleaned up Blu-Ray versions!) Overall, it’s something I recommend as there is great pay-off at the end, but it may take some getting used to if you’re not familiar with the slower pace and less detailed artwork.