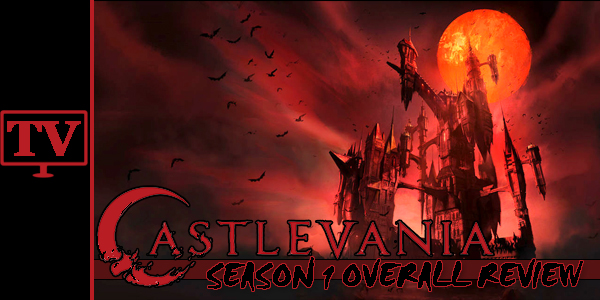 One of the weirder Netflix original shows to spring up, this animated series based on Castlevania (specifically Castlevania III) was an enjoyable watch, though it did suffer from needless gore and swearing in the first two episodes (reminded me of the old Manga Entertainment anime from the 90s, for those who know what I’m going on about…) the latter two were very entertaining. I don’t know if four 25-minute episodes can be called a season, but either way: let’s take a closer look!

When his wife is burned at the stake after being falsely accused of witchcraft, the vampiric count Vlad Dracula Tepes declares all the people of Wallachia will pay with their lives. His army of monsters and demons overruns the country, causing the people to live lives of fear and distrust. To combat this, the disgraced demon hunter Trevor Belmont takes up arms against Dracula’s forces, aided by the magician Sypha Belnades and Dracula’s son Alucard. 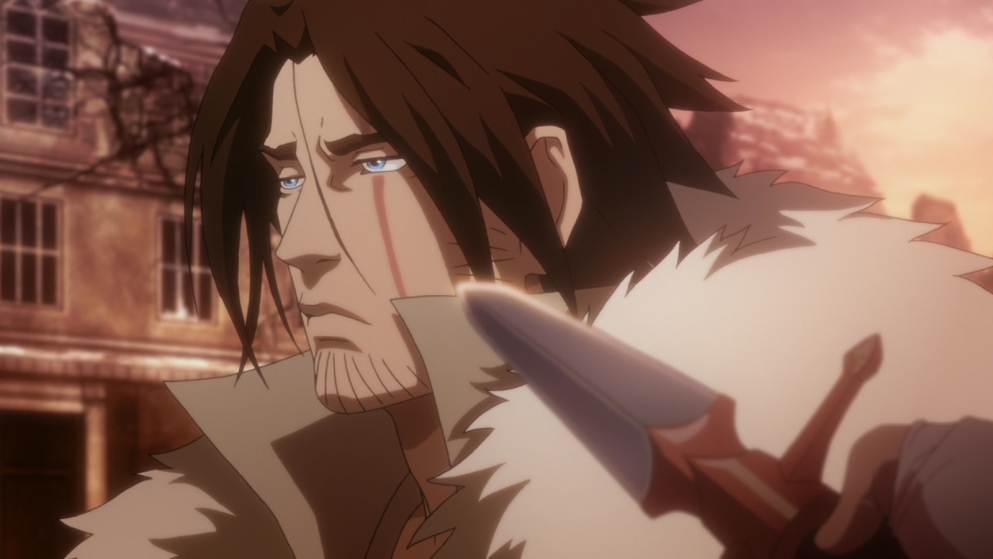 If you put a knife up to someone’s face and they give this look of boredom, you know you’re in trouble…

Trevor Belmont (Richard Armitage) – Bitter and often drunk surviving member of the Belmont family, Trevor has a harsh and sarcastic personality, but when push comes to shove, will do the right thing…

Dracula / Vlad Tepes (Graham McTavish) – The infamous demonic head of his ever-moving castle, Vlad has settled down with a human woman and began to view the human race more fondly… until they burned his wife alive. Whoops!

Alucard / Adrian Tepes (James Callis) – The son of Dracula and his wife, he opposed Dracula’s plan to wipe out the human race as he felt his mother wouldn’t have wanted that, which to be fair is probably accurate…

Sypha Belnades (Alejandra Reynoso) – A member of the Speakers who also has magic abilities, Sypha ends up teaming with Belmont when he saves her from a Cyclops, as you do.

The best part about the show is definitely Trevor Belmont. His sarcastic tone is excellent, and despite one or two awkward and embarrassingly sweary lines in his opening bar fight, he was frequently funny and easy to route for. Sypha and Alucard are also good in their roles, Sypha the wholly good person caught up with a dashing rouge, and Alucard the “straight man” to Trevor’s humour. All three are perfectly voiced, which is often rare for animated features, let alone ones based on computer games…

I like how they’ve taken the idea that Dracula must have had a human wife in order for Alucard to be alive and turned it into the reason for Dracula’s all-out attack that we see in the game. It added a good bit of character to what, at the end of the day, was just a trademark end boss. Likewise, the addition of the old “evil church”, complete with a great example of an evil Priest in the man only known as “The Bishop”, adds more layers to the understandably weak plot of the game (given its age it’s lucky it even has one…)

Finally, the animation is good. There are some parts where the characters are frozen in spot, which in understandable given how expensive animation is, but otherwise its good, even great. The fight between Trevor and Alucard at the end of episode 4 was a fluid and fun watch.

The first two episodes had a rather embarrassing feel to it. It was like a teenager’s idea of what an adult show is like. Over-the-top and unnecessarily detailed gore and as much use of the F word as you could fit in, even if it sounds out of place. Thankfully the show flips its self over in the last two and became well paced and funny, with the swearing actually put at the right times and any gore used sparingly and to good effect.

Obviously the length is rather silly. Four 25-minute episodes? My first thought was why not just make it a mini movie, or “feature length pilot”. From what I hear it was originally pitched as a movie, so why didn’t they just stick with that? Ah well, Season 2 is eight episodes, at least…

A Belmont with a whip in a castle… yep, this is Castlevania alright!

While it started off on an interesting, if unnecessarily gory, new backstory for Dracula, Episode 2 was pretty embarrassing before becoming a really fun watch in the last two episodes. Richard Armaitage’s Trevor is a legitimately funny and easy to route for protagonist, and by the season’s end he is surrounded by two good co-cast members. It’s all looking good for Season 2!