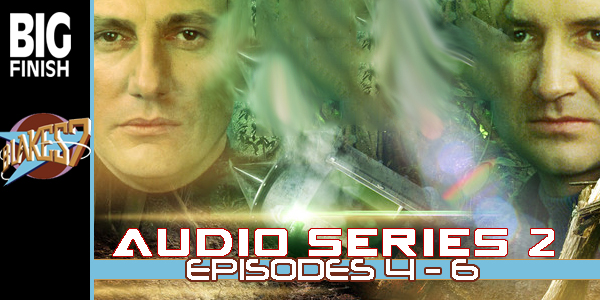 Blake’s 7 “Classic Audio Adventures” continues with the second half of the second series. Dayna is still missing, Avon and the crew are still following leads and Del Grant is still hanging around, for some reason. Let’s take a look!

The search for Dayna has led the crew of the Liberator half way across the galaxy, but now Avon knows why she left them. He knows where she went. He knows what she was looking for.

But can he find his missing crewmate before it is too late?

The answers lie on a planet called Appallon Five – but so does danger and betrayal. 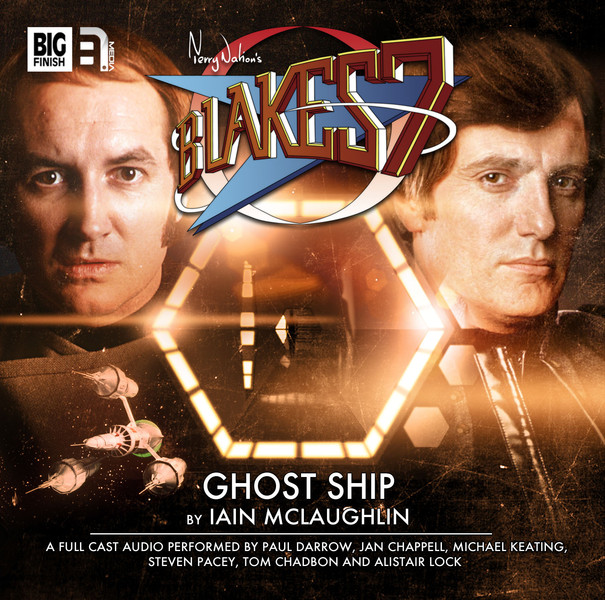 Kerr Avon (Paul Darrow) – Cool, calm and collected at all times, Avon is the leader of the Liberator crew and is willing to do anything in order to retrieve his vanished crewmate…

Vila Restal (Michael Keating) – Easily frightened, often cowardly, but also helpful due to his skills as a thief, Vila is the longest surviving crew member alongside Avon, not that it buys him many favours…

Cally (Jan Chappell) – Telepath from Auron, Cally is often useful in her level-headedness, in combination with her compassion, unlike her captain…

Del Tarrant (Steven Pacey) – Former arrogant space pilot for the Federation, Tarrant is getting used to the travelling freedom fighter role… though has still yet to lose his arrogance…

Orac (Peter Tuddenham) – Super intelligent A.I. that is happy to search through nearby databanks and general make calculations… if he must…

Zen (Peter Tuddenham) – The on-board A.I. for the Liberator. Vital to the running of the ship, but rarely vital to the plot of the series…

Del Grant (Tom Chadbon) – Former mercenary who is currently travelling on board the Liberator with his sister’s former lover… That’s about it.

It’s Tarrant! … and the other fellow.

The standout story of the second half has to be Episode 5 “Devil’s Advocate”, in which the crew of the Liberator end up in contact with Tarrant’s former colleague Pelora, and then soon the former President himself! It was a nice bit of continuity that The President references what happened in the first Audio series, now quite some time ago. It’s also good see… I mean, hear him in general given during TV Series 3 he is usurped by Servalan but is, once again, never seen, so to see (or again, hear) him on the run for his life now he’s been excommunicated was an interesting story to tell. Diving into Tarrant’s past was also interesting, leading to a tense face-off onboard the Liberator between the two, with the President having a bomb in his chest that will go off if he’s killed, but Tarrant being none the wiser. Giving life to the President himself has to be one of the best things to come from the audio series, and Hugh Fraser brings him to life brilliantly.

Episode 4 “Ghost Ship” was a good story, albeit a rather familiar one. Most of the crew are held down on a planet, leaving Villa, who believes the planet is haunted, alone on the ship. He starts hearing voices and soon plenty of paranormal things start happening, which Villa reacts to in the classic cowardly sarcasm we know and love him for. It’s the scenes on the ship here that feel familiar, we’ve had “isolated on the liberator and don’t know who to trust” stories before, including the opener of the previous Audio series. Still, the ending, with a classic Avon fake out and a fun reveal behind the ghosts, was a good listen, so it was worth sticking with. This would fall into a hypothetical “average” section, but as I don’t have one it had more good than bad.

Even the cover doesn’t look that exciting… which is odd as it has a crashed ship on it!

Episode 6, “Truth and Lies”, had some good points as well, but this time I felt it was a little more towards the bad. They track Dayna down to where her mother is hiding out, and split into teams to infiltrate it. Turns out Dayna’s mother is being held against her will and it was all a set-up. There were a few good moments, particularly with the infiltration (Vila and Grant made an amusing double act) it all came to nothing as they were all captured, and then all escaped. Dayna spent the whole episode in cryo sleep, which was unavoidable, but as I said in the first half review, it would always lead to a flat ending, especially since the whole story ended up revolving around Dayna’s mother and we don’t even get to hear her reaction to the whole thing! Overall a rather flat note to end on.

The second series of Blake’s 7 ends on a bit of flat note, although Devil’s Advocate was a great listen, the other two were decidedly average, and when one of those was the big finale, you have a bit of a problem…