Classic Doctors, New Monsters Vol.2 comes to a close with the Eighth Doctor still avoiding the Time War, but ending up in a space station full of Vashta Nerada! It’s kind of a shame that my first McGann audio is this far into his life, there are so many great audios with him that have appeared over the last decade and a bit to cover for the blog! ANYWAY, this is a good little survival horror story with some nice ties to both the Time War and the War Doctor audios. Let’s take a closer look!

As the Time War rages, Cardinal Ollistra of Gallifrey seeks to create ever more dangerous weapons to deploy against the enemy.

When the Doctor stumbles across Synthesis Station, he discovers that the Time Lords have sponsored a project to weaponise already-lethal creatures. But in doing so, Eva Morrison and her team have unwittingly used a colony of Vashta Nerada with a very unfortunate history of humanoid contact.

The Doctor finds himself leading a desperate race for survival, in which the shadows may be the least of their worries…

The Doctor (Paul McGann) – As the universe cries out in terror due to the war between the Time Lords and the Daleks, The Doctor refuses to fight. Instead he floats around the universe answering distress signals and trying to do what his name suggests: help people in need…

Cardinal Ollistra (Jacqueline Pearce) – High ranking Time Lady who wishes to end the war with the Daleks by any means, regardless of the loss of life to other species (basically she’s playing Servalan again, just not quite as evil!). She and The Doctor end up bumping into each other a lot during the war, but that doesn’t mean they’re friends…

Dr. Eva Morrison (Jan Ravens) – A head researcher at the Synthesis Station. Eva hopes to use the Vashta Nerada to help cure sickness and complete tasks that current nanobot technology can’t handle, and she’s willing to make weapons out of them in order to receive more funding…

The overall premise of the story is quite simple: space station that gets taken over by a deadly alien force and The Doctor and his allies have to make it from one end of the station to the other in order to make it out alive. It’s not going to win points on originality, but it’s a really fun example of the story trope, particularly because The Doctor and Ollistra make for a fun bickering couple, possibly more so than the War Doctor and Ollistra did (which I guess makes sense, as that’s after they’ve been through a lot…)

The idea of weaponising Vashta Nerada is a good one for a Time War story, and the fact that it ties back to Night of the Vashta Nerada from the start of the set is a nice full circle moment. The story also plays with the species a bit, there is a giant Vashta Nerada in one cell, and some “Nerada Vashta”, bred to stay only in light and be less effective in shadow, as well. It’s like an obstacle course from hell for The Doctor and co, and is a fun ride for 45-ish minutes.

Although I had issues with it being a repetitive device, I have to say Eva Morrison’s death was out of nowhere and quite a unpleasant (in a good, dramatic way) listen.

Eva Morrison was a good enough character, managed to be well-rounded in the short time we got to know her, but I’d just like to call out the fact that her death makes it three of the four stories in this set introducing a female who The Doctor ends up liking, only for them to be killed right at the end. It’d be fine if these releases were spread out, but they’re all in the same box! At least make one of them live or be male or something, give us a bit of variety! 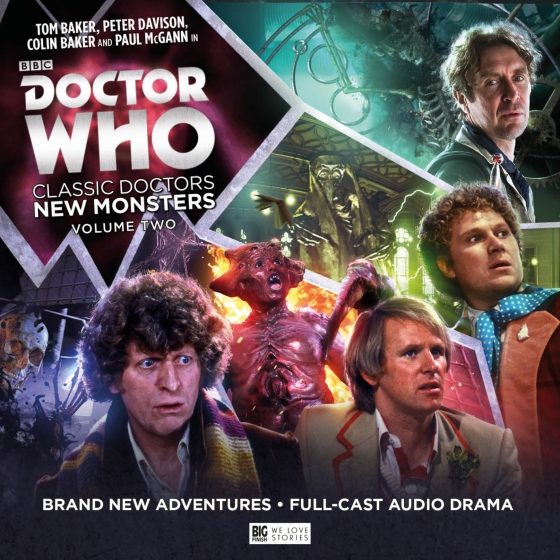 Fourth and final time I post the overall boxset cover…

The Vashta Nerada first appeared in the Tenth Doctor two-parter “Scilence in the Library / Forest of the Dead”. These specific ones are said to have come from the planet once called “Funworld”, giving this a direct connection to Night of the Vahsta Nerada, the Fourth Doctor audio that kicked this boxset off.

This is set during the early days of the Time War. The Doctor is still The Doctor, and the timelines and universe in general are completely screwed up as the two sides have yet to resort to actual regular attacking warfare and are still buggering up time to one up each other. Ollistra debuted in the first War Doctor set, though during that set it is implied that the War Doctor and her are already acquainted, so this works out well (I believe she was supposed to show up during McGann’s Time War boxset anyway).

Night and Day of the Vashta Nerada aren’t like night and day, they’re actually quite similar, though with Night people were being picked off because the exterminators were idiots, here they actually wanted to escape and destroy the evidence, and eventually do… well, some of them. It’s a classic “have to make it here through a hostile environment” story, but it’s a good one, with a good cast. A fun story to pass an hour-ish.