After breaking for a few weeks to allow for the July releases, it’s time to finish playing catch up with this year’s Fourth Doctor Adventures! The Haunting of Malkin Place is an interesting story, dealing with both traditional ghost tropes and locations, as well as the old spiritual vs. science, but also deals with PTSD and the horrors of war. It’s a concept that could easily have fallen apart, but manages to instead hold together and tell a really good story. Let’s take a closer look!

Whilst on the way to visit the town where Henry James lived, a chance encounter with a spiritualist on a train sends the Doctor and Romana on the trail of a ghost. It’s the most convincing case of haunting he’s ever heard of, he tells them. And so, on their arrival, does it appear to be.

Things go bump in the night at Malkin Place. The voice of a crying child. Birds bursting into flight. Strange movements in a séance.

The Doctor is determined there must be a rational explanation. But is science always the answer to everything?

The Doctor (Tom Baker) – The Doctor and Romana have been spending time on Earth for reasons unknown, and as per usual the two go on a seemingly innocent trip that turns into anything but innocent… why does that keep happening?

Romana (Lalla Ward) – Romana is trying her best to read the literature of the present Earth time, but she is finding herself increasingly more bored as time goes on… not to mention the strange sounds in the attic…

Beatrice (Fiona Sheehan) – Twin sister of Maurice, Beatrice lost both her father and brother and was finding it hard to cope, which is why she has chosen to ignore her brother’s odd arrival, and move forward in the hopes of a fresh start…

Talbot (Simon Jones) – A spirit medium who has had a rough time of it, and sees the idea of an afterlife a comfort… at least until the afterlife starts fighting back… 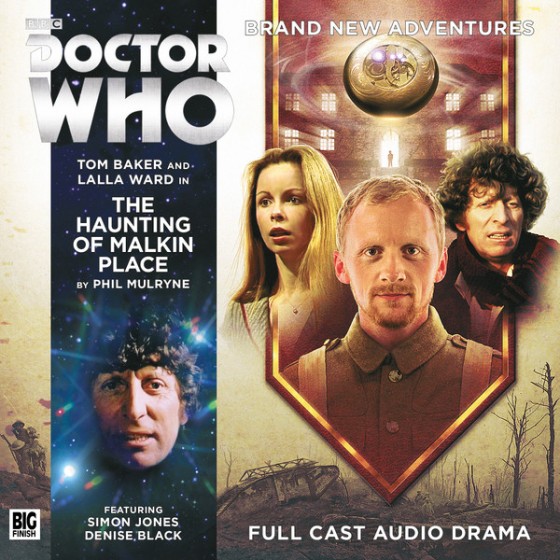 While the story does a decent job of creating a spooky atmosphere, it does a great job of both representing PTSD and generally telling a rather tragic tale that thankfully the usually jovial Tom Baker was up to the task in telling. The Doctor especially is sympathetic and determined to help Maurice, even when it later becomes obvious that in order to save him and his family, he has to let him die…

You see Maurice was accidentally taken forward in time by some future tech just before he was supposed to give his life to help his friend Jack on the battlefield. When The Doctor figures it out it leads to a heartbreaking scene where Maurice and Beatrice have to say their goodbyes, both probably knowing the goodbye would be for good. Sure enough, in the true timeline Jack arrives to tell Beatrice how her brother gave his life to save his.

Just when you thought the effects of war were done, Talbot, the comic relief of the piece, turns out to have chosen the path of a spirit medium because it meant there was an afterlife for the loved ones he lost in the war, and that maybe he could communicate with them one day. His assistant Tom was also a pleasant character to listen to, helping him out of a sense of loyalty rather than straight up belief.

Lallah Ward’s more stern and moody version of Romana is getting a little annoying now, especially given the nature of the story at hand. A more sympathetic role wouldn’t have gone amiss.

The very end scene, where delightful older lady Mrs Mountford admits to Talbot that she was a ghost all along and his belief is still correct, was predictable, a little cheesy, and kind of felt like a bit of a almost jokey end to a rather good story. Didn’t ruin it, but wasn’t the best end note…

The Doctor and Romana are living in 107 Baker Street, the address that The Doctor has used in many audio drama stories over the years.

Other than that, this is pretty stand-alone.

The Haunting of Malkin Place sounded like a rather dull ghost story, but ended up being a really interesting, and quite seriously toned, story. A rare (on audio) more serious Fourth Doctor appears at several places, and you end up really feeling for the guest cast. It has a few small niggles, but it is definitely one of the better Fourth Doctor Adventures stories.