The second James Bond film, From Russia With Love, is a fun story, full of a few really good moments. It also sees the debut of several classic Bond staples like Q and even Blofeld (not that he’s ever seen or named…) While not one of my all time favourites, I think I end up liking it a bit more each time I watch it… Let’s take a closer look at it!

Seeking to exact revenge on James Bond (007) for killing its agent Dr. No and destroying the organisation’s assets in the Caribbean, SPECTRE begins training agents to kill Bond. Meanwhile, Bond himself is sent to assist in the defection of Soviet consulate clerk Tatiana Romanova with the Soviet decoding device known as “The Lektor”, in Turkey…

Hard to figure out what emotion he’s showing there… Let’s go with… “Connery”. That’s an emotion, right?

James Bond (Sean Connery) – Top MI6 agent, James Bond, otherwise known as 007, is a master of both the spy game and the ladies game… which is lucky given they seem to cross over all the time…

Tatiana Romanova (Daniela Bianchi) – Soviet Embassy clerk whose defection starts this whole mission. She ends up as a love interest for Bond, though let’s face it, she gets dumped about two hours after the end of the film…

Ali Kerim Bey (Pedro Armendáriz) – Head of the British Intelligence office in Istanbul, Ali gets caught up in the battle between Bond, the Soviets and the SPECTRE assassins.

Rosa Klebb (Lotte Lenya) – High ranking member of SPECTRE, Klebb is sent to kill Bond and retrieve the Lektor. Her trademark weapon is a concealed poison-tipped blade in her shoe… 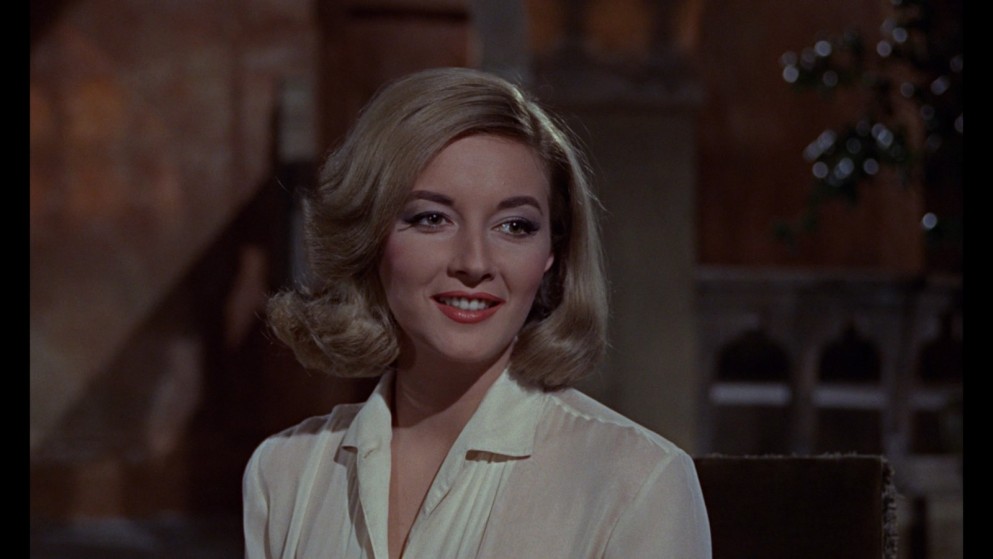 Once again Sean Connery is on fine form as Bond, and this time he has several good villains to play off of. Klebb and her deadly shoe are good, but “Red Grant” steals the show. He looks like he’d be pretty much impossible to take down. Romanova is better than Honey Ryder in that she isn’t completely useless (though he voice is once again dubbed over…)

The fight between Bond and “Red Grant” on the Orient Express remains one of the most brutal of the entire franchise. The complete lack of music really helps the scene, though I have a small complaint about it (see below!) it really is entertaining.

The whole film is really well paced. Some people call From Russia With Love too slow, even boring, but this is Bond as an actual spy thriller, rather than an action movie. I like the slow pace, though I’ll admit 20+ films of it would get old, but that’s neither here nor there.

Although it’s hard not to think of all the parodies that have appeared over time, I still like the shadowy head of SPECTRE and his callous way of dealing with failure. Blofeld would eventually be revealed and all that, but for the purpose of this film it works well.

Q debuts! Plus, matching up with this feeling more like a spy film rather than an action film, his gadgets are actually believable (not that I have a problem with the sillier stuff later…)

Now there is a stern, businessman-like face!

It’s unfair given it was just how it went back then, but the overly loud and almost comically “thump” sounds when someone gets hit takes away a bit from some otherwise great fight scenes. I can suspend my disbelief, and as I said, it’s just how it was, but it’s still a little distracting, especially during the fight between Bond and Red Grant.

I didn’t really enjoy the scenes at a gypsy settlement… that seems a little… I don’t know, not racist but… Whatever, the scene doesn’t last too long. I’m not a big fan of Pedro Armendáriz’s character Ali Kerim Bey, he always seemed a bit … cheesy and out of place amongst the cold war spy-ness, though after reading what he went through during filming he gets all the credit in the world (in case you don’t know, which I didn’t until recently, he had cancer in his hips and was in extreme pain filming From Russia With Love. He only did it to leave some money behind for his family, and actually committed suicide not long after. A sad tale indeed…)

Strange how her hair isn’t blowing in the wind… almost as if they’re not on an actual speedboat! *gasp!*

As a Bond film, at least how I mentally picture a Bond film, this technically isn’t a good one, but it’s a really good film of a different genre. Sure it has a few sillier moments, but in general it’s quite the tense cold war spy film, with some good foreshadowing and a few really good action set pieces. Really fun watch, even if it doesn’t fit as a classic a Bond film…