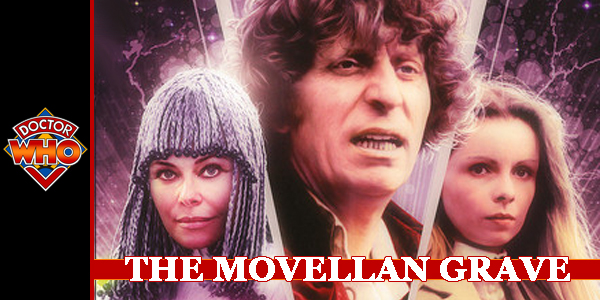 I finish my game of catch up with Fourth Doctor Adventures with last month’s release, The Movellan Grave. Can a rather unspectacular and by-design stoic and emotionless race be redeemed with a story focused on just themselves?? … Not really, but it’s a good effort. Far better than I thought it would turn out to be, anyway. Let’s take a closer look!

When an archaeological dig in 1980s England finds a Movellan power pack buried amongst Iron Age artefacts, the Doctor and Romana have no choice but to investigate. And what they discover worries them very much indeed.

A Movellan ship is buried under the ground. Soon the robotic enemies of the Daleks are making their way to the surface, but they are not the biggest threat humanity faces.

Because on board this ship is the greatest weapon the Movellans have ever devised. A weapon that could stop the Daleks forever… and anything else that gets in their way.

The Doctor (Tom Baker) – The long-scarf wearing Time Lord is once again spending some time on Earth, in this case in 1980, but of course he is soon directed to a mysterious alien artefact that could spell doom for the local populace!

Romana (Lalla Ward) – Romana, dragged once again to Earth, soon finds herself caught up in an incident with Movellans, the first race she properly encountered in her current regeneration. Nostalgic… and potentially deadly!

Carrie Pearce (Camilla Power) – Archaeologist who discovers a Movellan Power Pack in her Iron Age dig, and has no idea what fresh hell this will bring on her and her crew…

Commander Narina (Polly Walker) – The head of a special group of Movellans who were in charge of a brand new weapon… that soon got out of control and lead to her burial for countless decades… Good start!

Chenek (Chris Jarman) – The latest Movellan weapon: A Movellan with emotions! Sadly, these emotions are based on fear and anger, so… he’s a little bit Incredible Hulk-y… 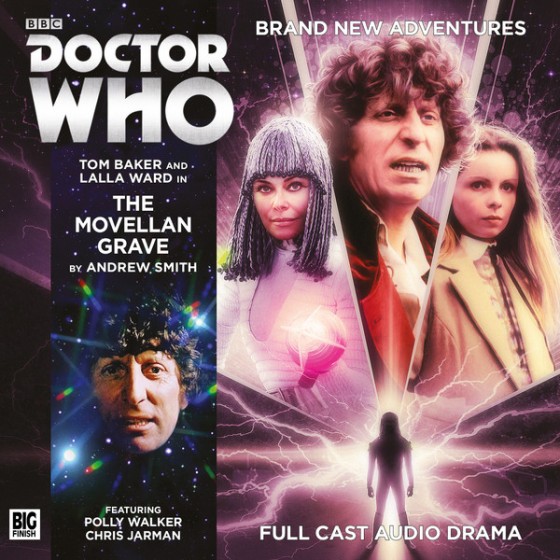 I enjoyed the basic premise of the story, if you have to do a Movellan only story, why not make it about a new weapon they’ve created to fight the Daleks. Plus I like the Earth and archaeologist parts of the story too, they nicely clash with the Movellan’s future tech and their “super weapon”.

The Doctor and Carrie Pearce make a good couple (because lord knows The Doctor and Romana can’t actually run around together any more…), she’s got her head on straight but still does the necessary question asking and generally has a good rapport going with The Doctor. She’s quite good with Romana too, actually. Top marks to Camilla Power, now I think about it.

The idea of the aforementioned big secret weapon being a Movellan with emotion makes sense, given the stalemate with the Daleks is due to their respective A.I. strategy planners clashing endlessly, and I liked the reason behind his aggressive behaviour (the humans the Movellans used to get data were terrified at the time of the data retrieval) Could have done without so many scenes of his running after people like the Terminator and screaming like the Hulk though…

I really enjoyed the ending, I thought they were going to go with the whole “now I have emotion and stability, everybody run and let me sacrifice myself!” but instead the now reformed Chenek flew off and… oh, wait… right at the last minute there’s a turnaround and he has to sacrifice himself and blow the ship up. Damn it! The thought of a human-like Movellan travelling around was actually interesting, but now any trace of this new Movellan idea is vaporised…. Ah well.

Well, the Movellans first appeared in Fourth Doctor TV story “Destiny of the Daleks”, which this story references not just because of the Movellans in it, but it also mentions the war and stalemate with the Daleks that form the centre of that story. Funnily enough, the Movellans also made a cameo appearance this year in the Twelfth Doctor story “The Pilot”!

This is the ultimate mixed bag. The human characters are really good, with archeologist Carrie Pearce being instantly likable and believable, and she sparks off of The Doctor and Romana well. On the other side, the Movellans are either dull or are in a near-cartoony “Hulk smash!” mode throughout most of the runtime. The ending was disappointingly cliché as well. Still, I’ve heard a lot worse! This is just another one of those Fourth Doctor Adventures stories that falls into the middle…