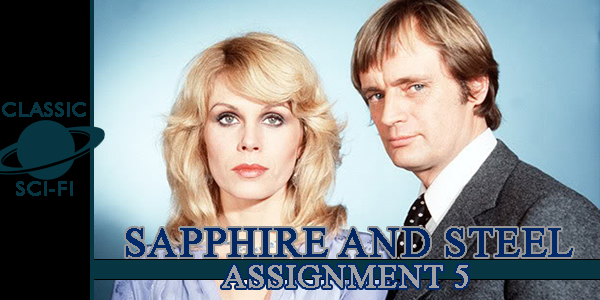 Sapphire and Steel’s fifth “Assignment” is … odd. It’s more quaint 30s murder mystery than it is anything resembling the show as its been presented in the past four stories. That being said, it did have some nice sci-fi twists in it, but in the end it was just annoying, with stereotypical posh dinner guests and all that bollocks taking up more screen time. It’s just not my thing, and for that I wasn’t a massive fan. Let’s take a look in more detail…

Dressing up and pretending that it was once again the 1930s seemed to be a novel idea for a dinner party hosted by Lord Mullrine, a wealthy industrialist, at his country mansion to celebrate fifty years since his company was founded with the late Dr. George McDee. Mullrine has even gone so far as to have every room in the house, with the exception of his office, put back to its original style. Then, strange things start to happen: McDee himself turns up at the party along with other anachronisms, and then, one by one, the guests begin to be murdered – their bodies vanishing shortly afterwards. Secrets and lies involving McDee from fifty years before are resurfacing, Time is trying to rewrite history, and the only ones who can stop it are two uninvited guests — Sapphire and Steel.

It’s odd how Steel didn’t have a mustache when he entered the house, but did in his period accurate clothing, yet the butler didn’t notice…

Sapphire (Joanna Lumley) – Sapphire is one of the mysterious “elements” that arrive when time itself has gone mad. She has some small control over time, as well as other handy abilities.

Steel (David McCallum) – Another “element” and Sapphire’s constant ally. He has strength and durability (being able to stop a knife tip with his hand without taking damage) but is otherwise a bit grumpy and harsh, which is this story is a great thing…

Lord Mullrine (Davy Kaye) – Wealthy owner of a popular company, Mullrine’s idea to have a party in the style of the 30s backfires… also he looks damn good for his age, it has to be said… (More on that later…)

Emma Mullrine (Patience Collier) – Emma was a secret (or not so secret) lover of George McDee, willing to go to great lengths in order to undo her greatest regret…

Well I did say spoilers ahead….

Steel playing the role of guy who doesn’t really give a crap, increasingly playing along less and less was a fun thing to watch. The twist that time was rewinding so Emma could undo the accidental death she was responsible for, only for that accidental death being the thing that saved humanity, was a good twist.

I liked the people who weren’t alive during the 30s being “killed” as a way for time, the real enemy here, to set things right in order to set up the redo. I think it might have had more impact if we weren’t reassured they weren’t dead and would just return if Sapphire and Steel could save humanity (which they obviously would!)

As I said, I don’t really enjoy the setting. Murder mystery, snobby upper-class people, lots of “are you okay, old chap?” and “oh I’m a woman, let’s do something!” “Do be quiet woman!” and all that jazz. There wasn’t really a likable person in the uncharacteristically large cast.

The main thing that annoyed me was the two Mullrines didn’t look like people who were old enough to be married in the 30s and having a party in the 80s. They had to be at least in their 20s back then, meaning they should have been in their 70s at least! Instead they looked middle aged, especially Lord Mullrine himself.

So after all the non-deaths that meant nothing, we get to the split point where humanity was accidentally saved during a lover’s spat. We see the new version happen, Sapphire and Steel tell Emma that what she did saves everyone, she goes “oh, I was lied to. Oh well” and then does it the same way again, and that’s it. Six episodes long, and it all lead to a simple scene…. SIX. EPISODES.

There is a scene where Sapphire and Steel are seen to start kissing in the dark… the hell was that all about? All the little subtly of their relationship was just thrown out the window. I know this was the one story not written by the series’ creator, but how did he okay that? Or why? *shrugs* Ah well.

I randomly took this screenshot and it made me laugh. That is all.

I didn’t really like this, as you could probably tell. The larger cast were all annoying, Sapphire and Steel just waited around for five and half episodes before simply solving the issue, and then it ends. Just not enjoyable, unless you like murder mysteries, and even then, once you’ve watched it once they’ll be no reason to re-watch it…