Hellsing Ultimate, and therefore the original Hellsing Manga’s storyline, reaches its end with the 9th and 10th OVAs. As I’ve mentioned previously, this was actually my first time seeing them, after only I – VIII being available here in the UK until Crunchyroll’s recent upload. In the end, while it does tie up lose ends and has some good moments, none are as good as Seras vs. Zorin or Alucard vs. Anderson from the previous two Volumes. Still, a good enough end, I feel. Let’s take a closer look!

A dying Alucard envisions his past as Vlad the Impaler, but is then awoken by the pleading of Seras, who is trying in vain to help him against the transformed Alexander Anderson…

Alucard (Johji Nakata / Crispin Freeman) – After his many years of existence, is this the end of his life? He’s been dead a few times now, but is this time may be different!

Seras Victoria (Fumiko Orikasa / K.T. Gray) – Now a full-formed Vampire (though she seems unable to grow back her arm, but is making do with the weird black … energy thing) Seras watches on in horror at the possible death of her beloved Master…

Sir Integra Fairbrook Wingates Hellsing (Yoshiko Sakakibara / Victoria Harwood) – Integra has had to watch the whole of London burn and most of those who she cared about get killed, but is she really worried that Alucard is going to be added to that list?

Walter C. Dollneaz (Motomu Kiyokawa / Ralph Lister) – Walter has dreamed of nothing else but defeating Alucard, secretly serving Millennium in the hopes that their technology could bring him back to his youthful and powerful self. He now has his younger body, but is there a foe to fight?

Alexander Anderson (Norio Wakamoto / Steven Brand) – After stabbing himself with Helena’s Nail, Anderson is a monster, unable to even speak… but hey, if it gets the job done!

The Major (Nobuo Tobita / Gildart Jackson) – The Major is obsessed with one single thing: destroy Alucard for good. He has spent 50 years planning the perfect scheme to bring him down, willing to sacrifice all his men and even himself just to achieve his goal…

Schrödinger (Ryoko Shiraishi / Laura Bailey) – Schrödinger, much like the cat, can be anywhere and nowhere, and loyally serves Millennium’s true purpose: taking down Alucard once and for all…

The Captain – Silent second-in-command of Millennium who is also a powerful werewolf. He doesn’t necessarily follow the ideals of Nazis or Millennium’s desire to destroy Alucard, but instead is search for someone who can finally bring his life to an end… 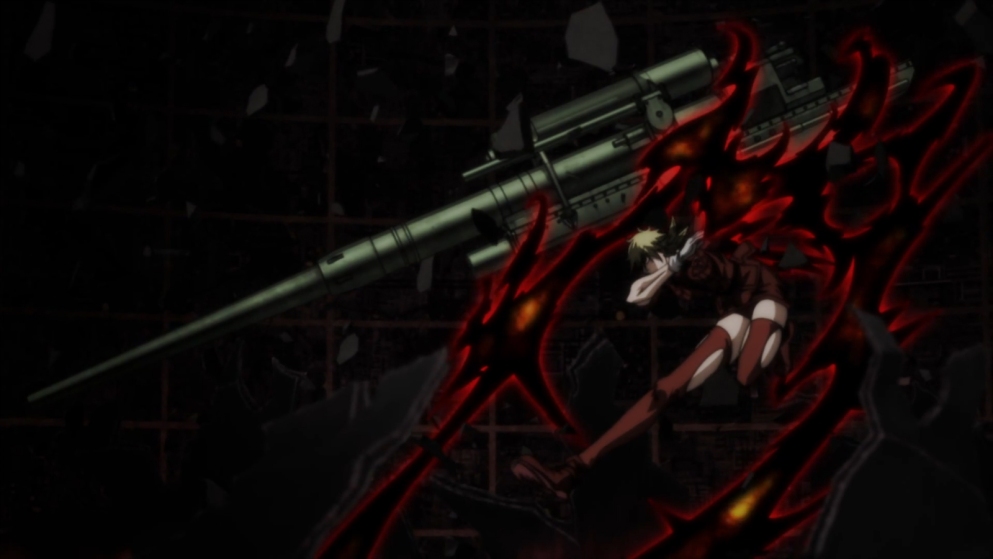 LOVED this scene, with Seras grabbing a huge AA gun to fire at The Major. If I could get a gif of The Major’s reaction afterwards it would be all the better!

Volume IX opens with some flashbacks to Alucard’s past, which was interesting… *ahem*, if a little unpleasant (he was raped as a child by a Priest, or some such person who children should trust…) and eventually his faith in God vanished. How he became a vampire, let alone such a powerful one, is still kept a mystery however. After this we see him overcome the weird root-tentacle Anderson creature, leading to one last great interaction between the two characters.

We soon move swiftly on to Walter’s big reveal: he isn’t being controlled against his will, and actually willingly went with Millennium a few OVAs ago in order to regain his youthful body and fight Alucard one-on-one in hopes of finally defeating him. It was an interesting revelation, though the fight doesn’t really go anywhere. Alucard get flung around for a while and chopped up, then Walter’s body starts to fail and Alucard just taunts him. There was a good moment where Walter’s body re-youths (is that a word?) even further to the child-like age he was during WWII, leading to Alucard revealing the little girl-like form he took during those days as the war was “like children playing”.

That’s pretty much it for IX. We move on to X, where we get a really good fight between Seras and The Captain, with some dramatic werewolf transformation action and a nice appearance from Bernadotte, who is now apart of Seras the same way we saw all of Alucard’s victims earlier in the series. Good, but again it was no VII or VIII battle. Alucard begins to absorb all the blood that had been spilt across London, during which Schrödinger cuts her own head off and falls into the blood, and soon The Major reveals the grand plan of Millennium: to finally kill Alucard once and for all by using Schrödinger’s “everywhere and nowhere” powers to somehow poison Alucard from within. It does a good job of making you believe that maybe the series does end with his death…

This leads to a great little scene between Integra, Seras and The Major, who is happy to be killed now his main goal had been achieved. Ms. Hellsing tells Seras to “Seek and Destroy”, much like she did with Alucard (again making you think he’s dead) and she tries to shoot through The Major’s glass wall, but fails (much to the Major’s displeasure), leading to her to use her power to pick a huge AA gun from the ship and fire that at him (much to The Major’s delight!). It literally made me laugh out loud, not just when she pulled it up from the floor, but The Major’s reaction of pure joy. The Major is “Shot” with it, and it’s revealed that he was pretty much entirely mechanical, as the idea of vampires and immortality never appealed to him. A good reveal, really. Integra and The Major shoot at each other, with The Major missing all but his final shot, before he is killed for good. We then see a wounded Walter (he was wounded by Anderson’s student that I can’t remember the name of…) find his way to The Doctor who had been alongside The Major all this time, and we get a little bit more of a science info dump before they both die together.

We then see the usual flash-forward you always get at the end of a manga series, this time 30 years passed. We get a few jokey scenes with older Integra and still-looking-the-same Seras, before Alucard returns, stating that it took 30 years, but he finally got rid of all the souls inside him, apart from Schrödinger, as he mentions he can now be anywhere he wants to be (great, make him even more powerful!). That’s that then! A good enough end, I guess…

After all his “bad-ass” skill moments, his big fight was a letdown…

As I mentioned in the top paragraph of The Good, the battle between Walter and Alucard is a non-event, and with the exception of The Captain vs. Seras, that’s all the action you get in these two volumes. It’s very odd for such a gore and action heavy series to have such a relatively quiet end, but there you go… Oddly, a series I would have preferred to have one!

I felt bringing Alucard back at the end was a bit of a cop out. Seras was perfectly fine as a “new Alucard”, protecting Hellsing and all (which she is shown doing during the flash forward) so we didn’t really need it, especially after a good death scene.

Of all the characters to get backstory, I wanted Schrödinger to get one the most. How the hell does she have such “hax” powers? I guess we’ll never know now!

Aww, he’s having such a fun time!

Coming after such a crazy roller coaster ride like the previous two OVAs, IX and X are a little bit of a letdown, action-wise. Normally I won’t mind story in place of action, but in Hellsing it’s different! That being said, it did have some good moments, and a good enough end. Some interesting backstory and a very enjoyable end for The Major too, making this better than average, just not the top marks the previous chunk got!