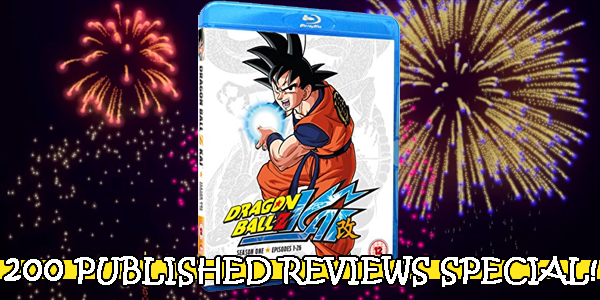 I’m a sad man… not as in I’m unhappy, but as in I’ve kept track of the things I’ve reviewed over the past few years, and I can now say that, if you combine my reviews for Anime UK News, here on this blog, my sparsely updated gaming blog and my long-abandoned but still technically active wrestling review blog, then you get the grand total of 199! So for my 200th published review I though I’d publish one of my first reviews ever. This is the review I wrote as a sample review in order to eventually land the Anime UK News job, but since there was already a perfectly fine Dragon Ball Z Kai Season 1 review up, it obviously went unused (beyond the use of proving I can write reviews and getting me the job, obviously!), but that also means it doesn’t fall under the category being property of Anime UK News, meaning I can post the review here.

So I thought it would be fun to post it as a celebration of my reviews, especially as that would mean I won’t just have Seasons 2-4 links on this site and I can complete the set. So here it is, no pictures, just the text that got me started down this path… 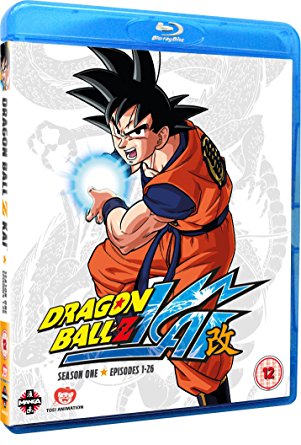 Dragon Ball Z Kai (known as simply Dragon Ball Kai in Japan) was an effort from Toei Animation to take the original 291 episodes of the series and slim it down to better fit the pace of the original manga. While doing this they also edited some older or broken animation/frames and restored them or completely reanimated them, as well as record a new voice track and music score (more on that later).

This being once again an adaptation of what was actually volumes 17 to 42 of the Dragon Ball manga, Kai at least tells viewers what happened in the lead up to where the story kicks off, as well as a glimpse of a TV special set before the story as a whole. A child from an alien world is sent to Earth, but due to a bump to the head the child ends up being raised as a kind hearted (and extremely naive) boy named Son Goku, who learns to fight the evils of the world and gain plenty of friends along the way. As Kai starts off the boy has become an equally naive man who now has a son of his own, Son Gohan. He meets up with several of his old friends, but the party is interrupted by his evil brother, who not only tells him of his origins as a Saiyan from the planet Vegeta, but explains that the planet was destroyed and now the few remaining Saiyans go from planet to planet, wiping the general populous out and re-selling them to new buyers.

This kicks off the first arc, where Goku and co. not only have to contend with the evil brother Raditz, but his two far more powerful allies. A testament to the filler removal process is that this arc, often and sensibly dubbed the “Saiyan Arc”, lasted 35 episodes in the original series, where as here it lasts a mere 16. The pacing is nice and fast, but doesn’t feel rushed.

This set contains episodes 1 – 26, so it actually also contains the first 10 episodes of the next, far longer arc in the series, the “Frieza arc”. Our heroes find themselves on an alien world, where the most powerful being in the known universe is lurking. I’d go into more detail, but it’s hard without spoiling the Saiyan arc, and if, by a small chance, this is your first exposure to the series, I don’t want to ruin it. Watching DBZ back in the early 2000s as a late teen is one of, if not THE main reason I’m still watching the anime genre.

So onto the specs, well, the series here is presents in the original 4:3 ratio, which means no footage has been cropped off the top and bottom like the orange boxset releases of the original DBZ series here in the UK. The footage does look its age sometimes, but it by no means looks bad, something not just down to the afore mentioned re-animating, but the great clean up job done in general and ample space on the blu-ray discs. The only negative here is that the original series (and most series still now to be fair) was animated with each episode being handed to a different team of animators. This was okay episode to episode, but here some of the jumps between animated styles in the middle of an episode can be occasionally jarring.

Voice wise is a treat, no matter which version of Dragon Ball you like. All the key characters from the original series reprise their roles for both the Japanese and English language version of the show, with a few exceptions (some for the better, like the new English language Frieza, which is far more chilling that the old-lady-sounding original) and the a further treat for English voice track fans is that the script has been kept as close to the original as possible, so no more “mondo cool” or Krillin being “in da house” any more. The background score is surprisingly the brand new soundtrack by Kenji Yamamoto, surprising as he was caught on plagiarism charges in March 2011 and the score has been subsequently removed from all versions of the show, including the Season sets in the States. I can only imagine that our Season 1 is copied from the Australian singles masters, or at least that the Australian Season 1 was never reprinted with the Yamamoto score removed. It does help keep the show fresh, but when it does switch to the original TV score down the line it will probably sound rather odd.

Finally, the show features newly animated opening (with “Dragon Soul” by Takayoshi Tanimoto being the track for the original version, and English cover versions by voice actors Vic Mignogna, Justin Cook and Sean Schemmel in the English dub) and newly animated closing (‘Yeah! Break! Care! Beak!’ by Tanimoto Takayoshi, dubbed in English by Jerry Jewell for the dub). I find the act of dubbing intro music into English an odd one, but I guess it makes it more sellable to TV networks. The opening is upbeat, and somewhat reminiscent of Dan Dan Kokoro Hikareteku, the opening for Dragon Ball GT. The eye-catchers, pictures placed before and after advert breaks, are also brand new (and change quite frequently to reflect what part of the story is being told)

So, as the purpose of any review, should you buy it? Well, if you’ve never seen Dragon Ball Z before, then yes. It’s the best and fastest way to experience the show, and English dub-wise also by far the best quality script and acting. If you own the orange boxsets already, I’d still upgrade. Not only is all the filler removed, but the show is properly framed and there is no lines disappearing when the screen shakes, among other picture anomalies found in those sets.

As someone who has seen this story a hundred times, be it through VHS tapes, DVDs or the many story modes in games, I feel excited to see the show get this kind of treatment, and it’s great fun for this long time fan to see the story proper without having to hit “next chapter” several times on the remote to skip past dull filler episodes. This is a great start to the refreshed series and a great start in general for new fans.