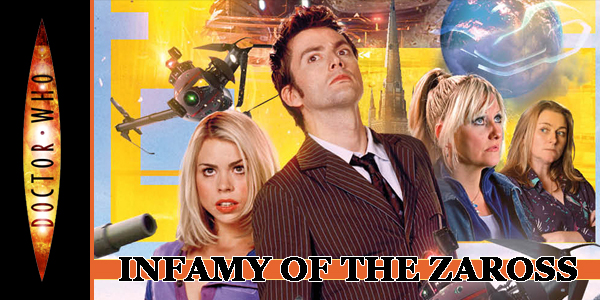 The Tenth Doctor Adventures Vol. 2 has landed in my… download tray, and so off we go with the first story in the set! The Doctor, Rose and Rose’s Mum Jackie star in an Earth invasion story, so they’ve got the “feeling like the period” bit right, that’s for sure! But what’s the actual story like? Well…

When Jackie Tyler takes an away day to visit her old friend Marge in Norwich, she finds her holiday immediately interrupted in the worst way possible – an alien invasion! The infamous Zaross have come to take over the Earth.

Or have they? After Jackie calls in the Doctor and Rose to deal with the menace, it soon becomes clear that this is a very unusual invasion indeed.

The Doctor is about to uncover one of the most heinous crimes in the history of the galaxy. And if he can’t stop it an awful lot of people are going to die.

The Doctor (David Tennant) – The Doctor, finally feeling free from the shackles of Time War-related guilt and depression, is enjoying life travelling around the universe with Rose Tyler… so much so that a visit to Norwich to meet up with her Mum fails to dampen his mood…

Rose Tyler (Billie Piper) – Rose is enjoying this new Doctor even more than the first one she met. Filled with energy and life, Rose is having the time of her life, even when her Mum calls her to come to Norwich to stop a deadly alien invasion.

Jackie Tyler (Camille Coduri) – Having a daughter who travels around in time and space can be a bit of an inconvenience, but when aliens suddenly invade while your round your friends house, it can be quite handy!

Jess Ellmore (Beth Lilly) – Jess wishes for nothing more than fame and fortune, having tried out for several reality / competition shows to no avail. Oddly, then, that an alien invasion might be her big break… 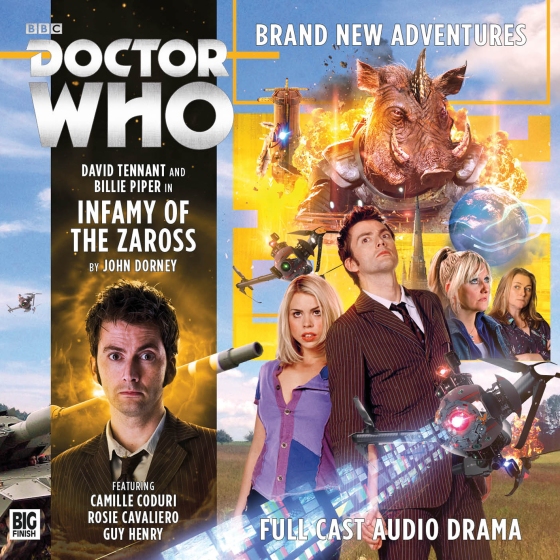 My least favourite cover of the bunch, a bit too busy.

First thing’s first, David Tennant and Billie Piper slip right back into their roles, as usual with Big Finish this does feel like it fits right into the revived Series 2. Camille Coduri is also straight back as Jackie Tyler without issues. It’s weird to think, but this era of the show is over a decade old now, so I do get a twang of nostalgia listening to these cast members reuniting.

The actual story is good, with some fun twists (though not exactly hard to figure them out, that’s for sure). The Zaross that invade are actually another race entirely who are just acting as an evil invading warriors, being directed by another race entirely (I’m afraid even though it’s been less than 24 hours since I listened to it, I’ve forgotten the names of both, so sorry about that…) That being said, when people start getting killed, it’s clear that this is “scripted reality”, and they are actually killing people. The Doctor’s reaction to this is brilliant, played as a silly laugh up until he realises that actual people have been killed purely for entertainment.

Meanwhile Jackie, her friend Marge and her daughter Jess do the classic Russell T. Davies thing of being held in line and lead to an alien labour camp, before escaping and walking around an alien ship (with Jackie’s line of “What do think I was going to do? Nut a Martian?” or something to that effect, making me laugh). Jess and her craving for fame leading to her, for a time, siding with the director and his race for a chance at galaxy-wide fame was a sad story, but got a happy ending via a classic motivation speech from Rose. It all felt very 2006, especially the focus on scripted reality shows!

So in the end the Zaross (or the race underneath the masks) find out that their Season 3 is actually the 10th overall season and two other fictional alien races before them had been in their shoes only to be killed themselves, all to refresh the show, so they rebel and take out the Director and his people. (a show staying fresh by replacing its lead cast every few seasons? Pft, it would never work…) Rose gets one last dig at Jess’s Mum for being… well, quite frankly a bit of a bitch, and then we have the old final few lines in the TARDIS, including a near-fourth-wall-breaking moment where The Doctor remarks “who would watch a show with me as the main character?”

Not much! At just 45 minutes-ish (like the TV series) and a solid lead cast with a good, classic John Dorney script, it would have been hard to go wrong. I’ll admit at time the similarity to one of Mr. Dorney’s other scripts, “The Fourth Wall” was a bit obvious, but it’s not like they were identical, plus I’m sure a lot of New Series only fans would have no idea of a Sixth Doctor audio story from many years ago, so… no issues really.

That all being said, given the length it didn’t feel like a big journey or have much time for character development, like most stand-alone modern TV episodes…

Not a lot, beyond Jackie Tyler being a fixture of Series 2 (plus 1 and a bit of 4). The similarities to Sixth Doctor audio “The Fourth Wall” I’ve already mentioned, but it does also have similar beats to Sixth Doctor TV serial “Vengeance on Varos” and Ninth Doctor episode “Bad Wolf / The Parting of the Ways”, with the idea of horrible reality shows where people die being a central premise. Not a bad thing, obviously these sci-fi ideas always float around, just pointing it out for interests sake!

Oh and the Doctor name drops both the Sensorites (from the First Doctor TV story of the same name) and the Land of Fiction (from the Second Doctor TV story “The Mind Robber”, plus several other audios and comics…) Plus, as this is series 2 on contemporary Earth, Torchwood gets a mention.

Infamy of Zaross is a great story, given it kicks off the first set of audio stories to feature The Doctor and Rose it does a great job of placing you back into the era. The story is good with some fine performances, so it’s a thumbs up start to the set!