After a shockingly poor “regeneration” in what is really just the Seventh Doctor’s debut story, Big Finish and Colin Baker got to “do it right” and create a story set just before the Sixth Doctor collapses mysteriously at the start of “Time and the Rani”, and here it is! “The Brink of Death” is sadly not terribly interesting, and beyond the actual regeneration scene it’s very little in the way of … anything beyond talking. Oh well! And we get so few second chances in life…

The Doctor and Mel face the final confrontation with the Valeyard – and the Doctor must make the ultimate sacrifice.

The Doctor (Colin Baker) – The Doctor is travelling with Mel, something he knew was destiny thanks to his infamous trial with the Valeyard, a long time ago now…

Mel (Bonnie Langford) – Mel is enjoying her chance to travel with The Doctor and break from her dull life of Earth. It’s a shame she’s pretty much written out of this story, really!

The Valeyard (Michael Jayston) – The Valeyard is a aberration, and distillation of all negative things inside the Doctor made flesh, and now he wants more… he wants it all!

Genesta (Liz White) – A Time Lady who spent … time in Yorkshire, off the books. This apparently means she now has an extremely thick Yorkshire accent and knows and instinctively says all sorts of local phrases… Weird!

The overall boxset cover. I’ll get to the other three one day, I’m sure…

The Sixth Doctor ending up having to kill himself in order to stop the Valeyard was a good twist, and kind of funny that The Doctor will never know it was a now-aborted version of himself that did it. He went on thinking that he just made a mistake and flew through some deadly radiation! Still, his last words were good, and I liked the effect of having the Seventh Doctor say his last words alongside him, which is at least a new spin on regeneration… Also sort of explains Sylvester McCoy in a wig at the start of his on-screen regeneration…? (joking!)

There is a brief mention that The Valeyard was created as an experiment by the Celestial Intervention Agency, but it’s still left pretty vague. By this point I kind of like the air of mystery the character has, so I’m glad it’s still mostly intact. 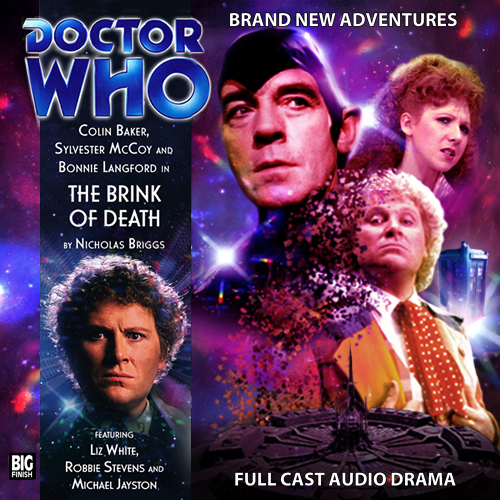 A fan-made cover for the story, given the “Last Adventure” stories didn’t get them!

I don’t get what was going through Mr. Briggs’ head here. Much like “The Light at the End”, which he admitted giving to himself because, as it was such a big event, it “had him written all over it”, I’m sure he jumped at the chance to write an official regeneration scene. Sadly he seemingly didn’t know what to write! The whole story is: The Doctor gets replaced by the Valeyard and ends up in the Gallifrey Matrix, The Doctor befriends awful stereotypical Yorkshire lass-Time Lady Genesta, the two get him out of near death and talk, the Doctor talks to the Valeyard before being returned to the Matrix. This repeats several times, with a few vague hints at a plot involving the Valeyard taking over Time Lord history by controlling the Matrix with some newly discovered species, and then the Doctor stops him by robbing said species of the energy they were siphoning off himself by killing himself.

See what was missing? Action, interest, drama even! The Doctor and Genesta didn’t seem that bothered given what was going on. Plus Mel… poor Mel. She literally does nothing. She thinks the Valeyard was always The Doctor, follows him around a bit, then when the Doctor kills himself we hear here worry about the radiation before collapsing. That’s it! There’s some pretty poor dialogue that isn’t even hiding the fact that it’s just characters explaining their plan. Overall… yeah. For such a big and important event someone should have read this and been concerned that it seemingly does nothing for 50 minutes then has a good regeneration scene. Again I can’t help but feel given all the great talent at Big Finish the story should have been shipped around and someone with a better plan should have been chosen, but instead I assume we got this story because Nicholas Briggs though it had him “written all over it”.

(Note that I’m not one of those people who always bashes Mr. Briggs online, I like quite a few of his scripts, mostly the older ones admittedly. But there is no doubt he has … a lot of times when he just writes something half-arsed and generic, and so giving this story to someone with a track record of more dull than good was a mistake… but when you make the decisions….)

Just so this matches the other Regeneration Marathon stories!

Beyond The Doctor’s regeneration and the fact it ties into the start of the Seventh Doctor’s debut story “Time and the Rani” (right down to the sound effects), the only other connecting thread is the Valeyard, who debuted in the “Trial of a Time Lord” series of TV stories, and has also appeared in several audios, including the other three that came with this “Last Adventure” collection.

The Last Adventure boxset, and specifically this story, was created to right a wrong, to give Colin Baker’s Sixth Doctor a big, final farewell… instead we get a dull conversation-laden story with a good ending. I guess, in the end, the fact we do have a good ending to the Sixth Doctor is better than Sylvester McCoy in a bad Colin Baker wig, but it would have been nice to have a good story overall, rather than just an ending…