Another year, another final review being a Doctor Who audio drama I hadn’t got around to giving a listen before Christmas! “Plight of the Pimpernel” is sort-of a pseudo-historical, though really the sci-fi far outweighs any historical context to come from the setting, not least the fact that the titular Pimpernel is a fictional character! But how is he then alive here in this story? Let’s find out!

END_OF_DOCUMENT_TOKEN_TO_BE_REPLACED

The One Doctor is a bit of an odd-ball in this Christmas specials look, as it technically doesn’t have anything to do with Christmas. It was released in December 2001, but that’s about it… except it’s clearly a light-hearted comedy affair set up to be Big Finish’s “Christmas Panto”. For that reason I feel it deserves to be here on this list, unlike the next year’s release “Bang Bang-a-Boom”, which while more light-hearted felt more like a Star Trek parody than anything Pantomime-y. ANYWAY, so let’s have a look at the first of five audio Christmas offerings in a row!

END_OF_DOCUMENT_TOKEN_TO_BE_REPLACED

After what was frankly a disappointing first half of the “Doctor and Peri” boxset, can the second half of the box salvage it? Well, erm… not really, though Conflict Theory is a good laugh if you like your humour more… Frasier-y. Want more details and less made up hyponated word bollocks? Read on!

END_OF_DOCUMENT_TOKEN_TO_BE_REPLACED

Back in the Main Range a few years ago there was a trilogy of stories where The Sixth Doctor met back up with an older Peri, the one that lived as a Queen alongside Brian Blessed (truly a fate worse than death…) This new plot thread was then dropped without a conclusion to the whole Peri thing… Until now! This “Doctor and Peri” set picks up that thread and, at least so far, gives us a continuation of the new “era”, even though I doubt it gives it any finality just yet. The first two stories are… rather by-the-numbers in two completely different settings, so let’s take a look!

END_OF_DOCUMENT_TOKEN_TO_BE_REPLACED 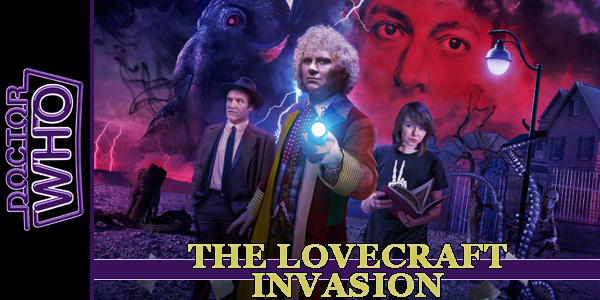 Now this is an interesting one! The Lovecraft Invasion was supposed to be released last month, but ended up being delayed due to “production issues”, which most people assumed was probably due to Lovecraft being an out-and-proud racist and the current culture of condemning such historical figures. Sure enough, thanks to a preview that went out before the “issues”, this is indeed what happened, and it led to some rather on-the-nose character assassination of the titular author. I mean, I hate racists with a passion, but there were more subtler option available, I’m sure… *hand waving gesture* anyway, ignoring that, what’s the actual story like?! Good question!

END_OF_DOCUMENT_TOKEN_TO_BE_REPLACED

The main range continues to plough forward with the next Sixth Doctor / Constance / Flip story, and boy it’s a dozy. Scorched Earth takes place in France just after its liberation, in other words Constance’s near future, and so this story really explores the differences between Constance from the 1940s and Flip from the 2010s. Throw in some soldiers on all sides of the war and a fiery alien and you’ve got a hit on your hands! Let’s take a closer look.

END_OF_DOCUMENT_TOKEN_TO_BE_REPLACED

This month’s Main Range audio sees the return of the Sixth Doctor, Constance and Flip trio, plus the audio debut of the Ice Warrior “Ice Queen”. All this plus regular Ice Warriors, Ice Lords and Time Lord technology, and that’s a lot of returning or familiar elements, but what about the new Vultriss race? Does it all add up to a good story?! Let’s find out!

END_OF_DOCUMENT_TOKEN_TO_BE_REPLACED

The last Main Range audio of the year / decade, Blood on Santa’s Claw is an “and Other Stories” release that is actually more one single story where the location changes a bit in between. Sometimes funny, sometimes sad, but often entertaining, Blood on Santa’s Claw is a good end to the range in 2019, if not exactly the most original story you’ll listen to this year… Let’s take a look!

END_OF_DOCUMENT_TOKEN_TO_BE_REPLACED 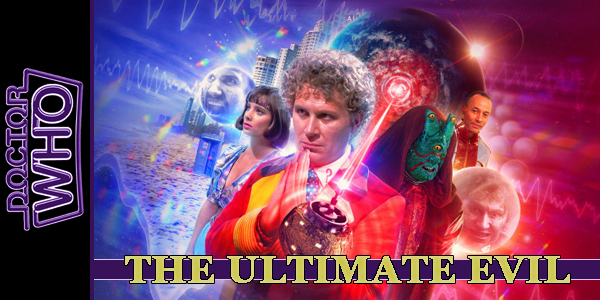 Back when the original run of Lost Stories came out “The Ultimate Evil” was notable by its absence, especially given it was so far along back in the day that it had a Target novel adaptation, something most of the other releases in this audio range didn’t have. So rights issues have apparently been sorted and The Ultimate Evil finally gets a dramatized adaptation and… yeah… erm, it’s not good. Very of its time, no doubt, but … Yeah. Let’s take a look! END_OF_DOCUMENT_TOKEN_TO_BE_REPLACED

My idea of reviewing a story from every season as its released on Blu-ray immediately ran into a problem thanks to the release of Season 23, a season that’s actually one long story, albeit a story that is clearly segmented into four parts. Rather than review the whole Trial of a Time Lord (which I didn’t have time to do due to a certain six film, six game marathon) I was going to just review one part, but that didn’t seem right either. Thankfully, on the Blu-ray, is a special “Standalone Edition” of one of the stories, with all the Trial stuff cut out, so I’ve decided to review that, and then later do an additional paragraph or two when I reach this story during a review of Trial proper. With all that said, how is Terror of the Vervoids when all the Trial stuff is removed? Let’s find out!