Due to the retroactive nature of the War Doctor we had to jump forwards for two stories in the Regeneration Marathon, but now we’re back on track for the Ninth Doctor’s regeneration, after just one solitary series. I also have to say that looking back at it, this two-parter somehow feels more dated than the ones from the 70s and 80s! On the other hand it was a good reminder of how great Christopher Eccleston was in the role. Let’s have a closer look!

Separated and with no TARDIS, the Ninth Doctor, Rose, and Jack have to fight for their lives on board the Game Station, but a far more dangerous threat is lurking, just out of sight. The Doctor realises that the entire human race has been blinded to the threat on its doorstep, and Armageddon is fast approaching.

Well… here’s a character from the cast, anyway!

The Doctor (Christopher Eccleston) – Thanks to his travels with Rose, and to a lesser extent Jack, The Doctor is finally feeling a bit like his old self again, no longer fighting a war with the Daleks… Oh.

Rose Tyler (Billie Piper) – Rose is still having a blast travelling with The Doctor and Jack, and now she’s on a future version of the Weakest Link! What fun! … Oh.

Captain Jack Harkness (John Barrowman) – Cocky and somewhat self-obsessed, Captain Jack cares for his new travelling companions and has began to broaden his mind…. Oh. (Wait, that doesn’t make sense… Whatever. It matches!)

The Daleks (Nicholas Briggs) – The majority of the Daleks were wiped out in the Last Great Time War, but you know what they say: you can’t keep a good genocidal race down!

Lynda (Jo Joyner) – A contestant in a Big Brother series airing in 200,100 AD. If you get evicted, you get vaporised, so… She’s pretty sure she’ll have a bad day real soon… How right she was…

The Dalek Emperor, looking a bit larger, and a lot more exposed than before…

The big highlight of this two parter is the sad realisation that Christopher Eccleston hit his stride and was on fire for the whole thing… then he leaves the show. The jokey stuff with Big Brother (the only good bit about this opening segments…), when it dawns on him that his meddling in the past lead to this horrible future, the now near-iconic speech at the Daleks, (where he spells out that he is the Doctor without a plan, but he’s still going to rescue Rose and destroy them, causing the Daleks to panic) the “I’m dead, sorry, but the TARDIS will take you home” message and the regeneration scene are all top notch. This two-parter is carried on the Ninth Doctor’s back, and done so easily and greatly.

Thinking back after watching this, I think the idea of The Doctor going back to somewhere he “fixed”, only to find out he actually put history on a worse course is really interesting. I can only think of one or two other examples of this in the whole series, I think it’s a fun branch to follow.

Rose is fine as a generic companion here, until the end moments, when she absorbs the time vortex and become all powerful. That’s a good scene, although it was ripped straight out of the Eighth Doctor comics, but I’ll ignore that, this time… Captain Jack was his super-cheesy self still, which does work in its own way, and it’s funny how important the scene where Rose revives him with her spooky time powers is now, retroactively.

Speaking about the regeneration scene a bit more, where The Doctor kisses Rose in order to remove the time vortex energy from her, killing him in the process, was a great, noble self-sacrifice bit, but also a sign of love between the two that would be explored in the next series. I still don’t know about The Doctor being in love, but for the purpose of this scene I feel it worked well in setting up that plot strand.

Lastly let’s talk about The Daleks. Featured for the first time en masse and flying around, it’s an effective story for them (even if the 2005 TV budget CGI now looks horribly dated, but there you are…), doing a good job of showing their ruthlessness (I’m pretty sure Rose is the only person in the station not to be killed in this story, even if Jack is revived and The Doctor regenerates). I love the Dalek Emperor, especially the super booming voice Nick Briggs does for it (both on TV here and on audios in the past). 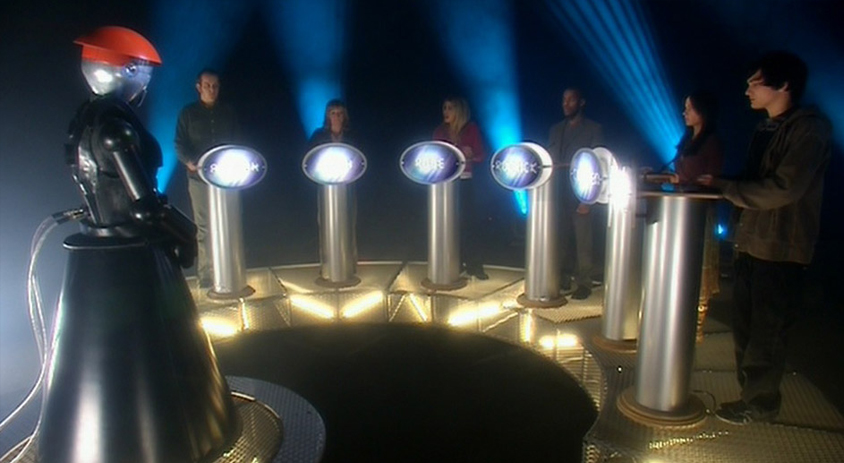 It’s funny how the far, far, far future has versions of shows from 2005…

This story features a futuristic version of The Weakest Link, Big Brother and What Not to Wear, with plenty of jokes at their expense, but … you know, in 2017, it’s hard to for these scenes not to just to feel extremely dated. Yeah, Big Brother is still around, barely, but in general this is just a big message saying “this is what was popular on TV in 2005!” and therefore upon rewatching it down the line it feels out of date, more so than far older stories that didn’t reference culture of the time on screen constantly. Throw in the outdated CGI (which always looks worse than old fashioned practical effects) and the whole story feels far more old and outdated than far older stories from the show. I can only imagine a kid watching this now, say he got into Doctor Who during the Capaldi / Twelfth Doctor run and watched the old stuff via Netflix, he’d have no idea about a lot of the gags on display. I’m sure it wouldn’t impact the story overall, it is after all about The Doctor vs. The Daleks, but still… I think Russell T. Davies went a bit overboard with the cultural references.

A lot of the guest cast was pretty bad, with Lynda being passable at least (which is good given her screen time). 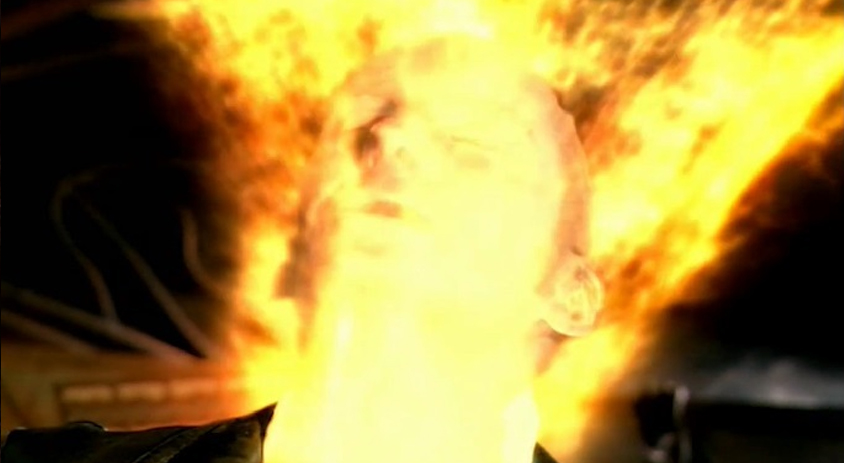 The debut of the gold, fiery regeneration! (although it’s retroactively already appeared in this marathon…)

Quite a bit! First off, the whole “Series 1” had a linking phrase of “Bad Wolf”, which is then revealed to be the actions of the Time Vortex’d Rose in this story. Torchwood is mentioned during the story also, which is the linking phrase in the next series.

As mentioned this story shows The Doctor’s handiwork actually backfired, in this case his attempts to save people by freeing Satellite 5 in the story “The Long Game”, with Satellite 5 becoming the Game Station of this story.

As I mentioned, the Eighth Doctor comic “The Flood” sees The Doctor looking into and absorbing the Time Vortex, complete with gold eyes and ominous speech patterns, almost exactly like Rose’s experience in this episode (though given it doesn’t kill The Doctor in the end, I guess he only absorbed part of it?)

Bad Wolf / The Parting of the Ways is a great exhibition of how great Christopher Eccleston was as The Doctor, and has some great moments. It does feels dated, both thanks to the abundance of cultural references and the now-poor CGI, but that doesn’t detract too much from the experience. Overall, as a regeneration story, it gives the Ninth Doctor a great exit, and that’s the main thing to get right in one of these stories!