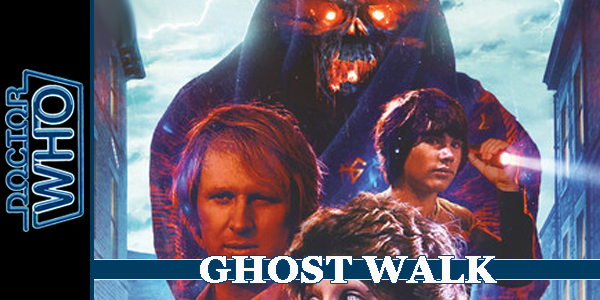 Sadly after a really strong run of stories for this TARDIS team, we finally hit a story that I just didn’t care for. It wasn’t awful, but it was certainly dull, and did little to nothing with the companions… A shame, but you can’t win them all! Let’s take a closer look…

This is a city of ghosts and no-one knows them better than Leanne. Twice a night she leads tourists to visit the most haunted sites – the Hanging Yard, the Witch Pool, the Screaming House, and, of course, the Catacombs.

Leanne’s realised the ghosts of the city are real. Something’s lurking in the Catacombs – an ancient force that has been growing in the darkness for centuries. Sabaoth is returning and they must be stopped before they devour the world. Leanne knows this, because a ghost told her.

A ghost called The Doctor.

The Doctor (Peter Davison) – The Doctor is never one to turn down a good old fashioned alien distress call on Earth, and neither is the TARDIS… This is something both may come to regret…

Adric (Matthew Waterhouse) – Adric is beginning to become confused with all the attention that Earth gets from The Doctor, I mean… It’s not that great, and he keeps nearly dying, so…

Nyssa (Sarah Sutton) – Nyssa is always happy to go along with The Doctor, even if that means also frequently nearly dying, or constantly dealing with people falling in love with her… or both.

Tegan (Janet Fielding) – Tegan likes a good moan, and really would like to return to her time period, but she’s also happy to go along for the ride… except when the ride is a creepy underground catacomb that nearly kills her.

Leanne (Fenella Woolgar) – Leanne was happy enough with her lot in life, constantly touring people around “haunted” locations… that is until these haunted locations turned out to be haunted…

Sabaoth (Stephen Greif) – A powerful entity from unknown space, it feeds on life energy and has picked Earth as its next meal… 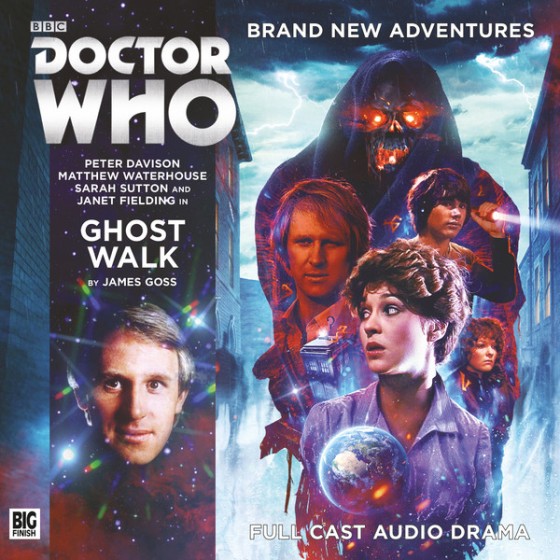 Another top class cover! Shame the story didn’t live up to it!

While there was a lot a didn’t like, there are several scenes with Leanne talking to The Doctor in her mind that are funny and well acted. The Fifth Doctor / Peter Davison can do great dry wit and sarcasm, and it’s played well here.

I’m also a sucker for an evil villain with an over-the-top evil voice, and Sabaoth does this well. Proper arrogant and booming voice of evil. Great stuff. Same goes for parts of Episode 1, where Adric and Nyssa are stumbling around in the dark afraid. That was well done as well. It’s not all bad!

The frame work for this story is all over the place. There’s a whole, got to be 10 minute, pre-opening titles sequence that is JUST Leanne doing the Ghost Tour. JUST that. It would be dull enough if it was filmed, but audio only? Soon Nyssa and Adric are sent to different time periods and have small stories (including a Nyssa love story again…) during Episode 2, but then all but vanish from the rest of the story. Tegan lasts a bit longer tagging along with the Doctor, but not much. There is a lot of Leanne and her Ghost Tour, which isn’t very interesting, or funny really (beyond the aforementioned interactions with The Doctor) and so a good portion of the story is either side stories that go no where or Ghost Tour banter.

The ending is a bit cliché, with Leanne the regular person having the power to expel the super-powerful otherworldly entity through perfectly Doctor Who-y technobabble. It wasn’t bad, but it wasn’t very exciting.

The TARDIS vanishes briefly due to the HADS (or Hostile Action Displacement System), something introduced in the Second Doctor TV story “The Krotons”, and has appeared here and there a few times both on TV and audio.

Apart from that, it’s stand alone, unless you want me to list Doctor Who stories dealing with ghost-like entities, in which case I’d be here all day…

Ghost Walk isn’t the worst, it was a good start and a few bits of funny dialogue, but overall I found it dull. So much time spend on nothing, and the ending wasn’t much cop either. Ah well, the Fifth Doctor – Adric – Nyssa – Tegan stories had to hit a brick wall eventually, let’s hope they can rebound quickly next month!