I’ve been a fan of Dynasty Warriors since the fifth entry, which sounds like I got in late, but then when you factor in how many not just core games, but spin-off titles I’ve played since then, then I’ve played A LOT of them. That’s why Dynasty Warriors 9 intrigued me so much, it was trying something new! New in a Warriors game! Is this change good though, or is it Dynasty Warriors 6 all over again? Let’s fine out!

A beautiful sunset, ruined a bit by “Over-HUD Syndrome”.

The Dynasty Warriors games are a hack and slash, “1 vs. 1000” series of games based on the ancient Chinese period of history known as The Three Kingdoms era, with famous leaders, strategists and soldiers being reinvented as exaggerated, anime-esque versions of themselves, featuring a somewhat accurate retelling of the time period’s major wars and battles.

Dynasty Warriors 9 was released in Japan (and China!) on February 8th 2018, with a US and European release following on the 13th of the same month. After the higher ups at Koei admitted (rightfully) that the differences between 7 and 8 were minimal at best they went in a whole new open world direction with 9, announcing the change in December 2017.

DW9 brought the already impressive roster from 83 to 90, with four more if you include DLC.

How different can a Dynasty Warriors game play like? Well, while you still attack with combinations of square and triangle, there are now moves assigned to a pop-up menu brought on screen by holding down the right trigger and choosing a face button. These attacks resemble the kind of attacks that happened at the end of move strings from previous games, and while it took some getting used to, this new system does allow for longer and more varied combos, given you’re not forced to see a particular attack at the end of a certain string, giving you  the ability to hit several different ones in a row while also throwing in a few regular square or triangle attacks as well. The trademark “Musou attacks”, special attacks done by pressing circle if your meter is full, are still here, giving each character a standing and jumping special.

You also have several new things relating to the open world, which I’ll get to in a second. Everyone has bows they can access by pressing down on the d-pad, with different arrow types being collectable and purchasable. You also have a stamina gauge, allowing you to run for a certain amount of time, same goes for horses (though they can run longer, obviously…) Oh, and some missions involve stealth, complete with a crouching system and guards with a cone of vision, but they’re almost always optional side-quests, and a lot of the time they’re easy anyway. You also have a grappling hook to climb over walls and other tall structures, which sadly makes castle sieges far more easier than they should be…

The open world aspect is interesting, but doesn’t always work. The map is extremely vast, but given its ancient China, it’s got a few large cities and castles, but for the most part it’s just scenery: forests, mountains, rivers, vast open fields… it’s all very pretty (see the graphics section!) but it’s also pretty pointless. I really like how it affects missions though, in the past the maps were pretty small, making nearby forts and barracks just a small walk away from the main battlefield, where as in DW9 when you start a major battle you can do sub-missions to one of these other fortresses and camps that are often far away from the main battle, giving the whole game a much more realistic feel. Although really long journeys in between missions are unnecessarily and obnoxiously long, when you get to a main mission I really enjoyed travelling around the map, meeting other characters (both for a chat or a fight) and doing small battles that impact the outcome of the main one (cutting off supplies lowers enemy morale, defeating a certain character stops them from making it to the main battlefield, that sort of thing) If they do cut the open world from a metaphorical DW10, then I hope they at least keep the battlefields big enough to still capture that feeling to travelling around the area, rather than go back to all the different castles and forts being right next to each other, like previous games…

You say “Preparing the Fire Attack”, I say “Burn everything in site to cinders”.

Having an open world has lead to the old chestnut of mostly completely skippable mini-games, like fishing, hunting and cooking food by gathering resources. You can also own properties and decorate it with furniture, and invite other character to your house to increase your “friendship level”. All of this is pretty much entirely pointless, you may occasionally need to go hunting for specific resources to make new items or weapons, but for the most part you can just play Dynasty Warriors 9 like any other game in the series (just with a much larger map, obviously…) You also reveal parts of the map by climbing tall watch towers, complete with camera panning around you when you reach the top, because that just has to be a thing in open world games now! Thankfully you can also fast travel to any location you’ve previously visited, which makes some of the long treks across the map with your character a lot more digestible.

Speaking of the characters, as a result of building the new combat engine, there are a fair few characters that share weapons and therefore movesets (with the exception of one special move and the two musou attacks). As an attempt to make the game a bit more “realistic” some of the weapons removed are stuff like the boat that Huang Gai used to swing around, or Guo Huai’s completely out-of-place minigun, that’s fine I guess (I never had a problem with it, but whatever) but mysteriously they removed some of the most iconic weaponry, like Sun Ce’s tonfas or Zhange He’s Vega-like claws, yet they kept in the nonsensical nunchuku! As it turns out the claws at least are being brought back as DLC, but still… an annoying oversight.

I will also mention another big strike against the game: lack of modes. Beyond story mode, you have Free Mode (which is just story mode but you can play any mission as any character) and… that’s it. Just options and an encyclopaedia of terms / characters / places. As much as I really enjoyed playing it for the first few weeks, there is little to return to… 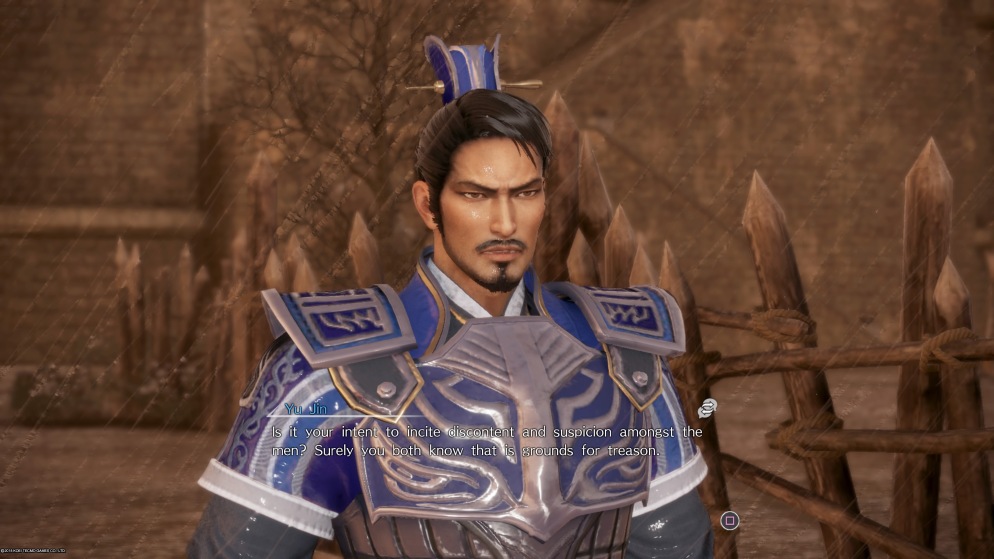 My best attempt at screen-grabbing the great rain and water effects.

One area where DW9 definitely excels is graphically. The character models themselves are only a small step up from last gen, but the environment! Wow. Lighting is excellent, the bright sunlight dotting through the trees, the moonlight lighting up a wide open space… the detail on leaves and grass combined with the impressive draw distance makes the sadly empty map a fun place to travel around for the while. I want to make a specific point about the rain effects though, not only does the rain look realistic falling down, but the wet character models are the among the most realistically, well, wet looking people I’ve seen in a game. Individual droplets running down their faces and armour, any cloth they’re wearing being notably darker… it’s a great effect, plus they don’t break the fourth wall by having droplets appear on the “camera” like some games do, which drives me nuts.

Sound is fine, the actual effects and the music anyway (though I didn’t find myself with a theme stuck in my head like I have the previous two core entries, so it doesn’t quite live up the legacy, so to speak) The English voice acting on the other hand has dropped backwards to PS2 levels of awful, the actually talented and sometimes notable voice actors they hired for the past two games are mostly gone, leaving some properly bad new actors in their stead. It’s a real shame, but at least the game offers both Japanese and Chinese voice casts as selectable, so it could be worse!

As mentioned previously, you play through exaggerated retellings of actual battles in ancient Chinese history, from roughly 184 – 280 AD.

The story mode has reverted to the old “each character has their own story” method, which was alright back in the PS2 days because there were so few characters, comparatively anyway. The switch back to that system from the more logical “each faction has their own story mode” is just… annoying. I’m certainly not replaying the game 90 times! Obviously some characters play different missions, or the same mission but from a different perspective, but after a while you’ll land on a character that has very little new content to play through.

This is the first DW entry to have DLC and a Season Pass, though really it seems like the old “Dynasty Warriors XL” physical releases of past games have just been replaced. It will have several new weapons, maps and four new playable characters (all four of which appear in the regular game in an unplayable state, which is a bit … naughty, to put it politely…) Three of the four new characters fill out the “Others” faction section though, which is nice as that had been all but ignored up until DW8. 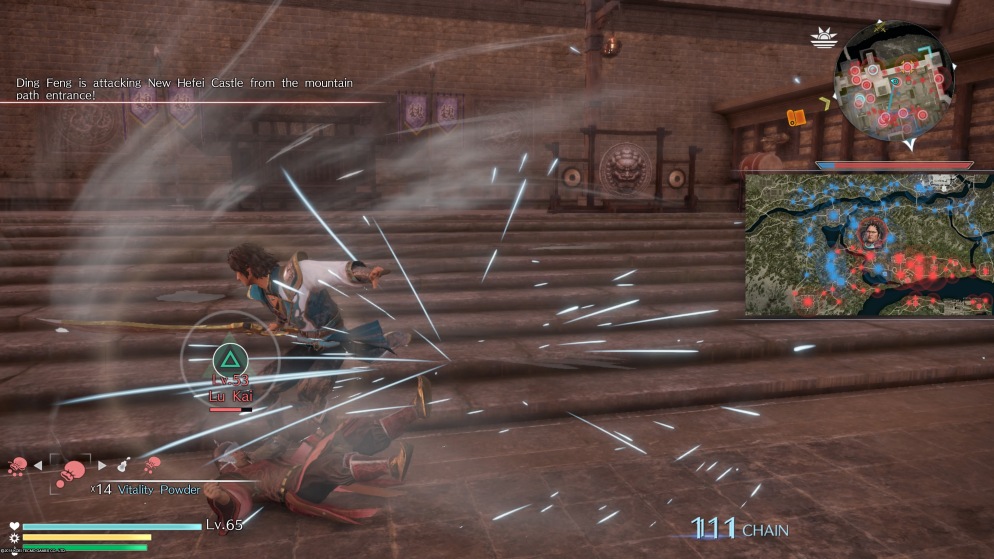 They may have taken out some weapons, but Sima Zhao still “body surfs” opponents, so all’s good…

My overall thoughts of Dynasty Warriors 9 then? It’s hard, because I genuinely had a really fun time playing it solidly and damn near daily for over a month, that’s more than some games that score quite high get. It improves on the old formula in my eyes and is lovely to look at, but it does have some serious flaws that need to be addressed. The empty map is a problem (although fast travel helps, at least) and it’s in desperate need for more modes and things to do beyond the artificially long story mode. I think on the virtue of my time with the game I’ll have to rate it a 4, because I will be back to it down the line and run through a character’s story mode that I haven’t played yet (when it’s been long enough to forget the more common missions…) It’s not everyone’s cup of tea, though, and I’m sure down the line if I turn this into a “Thoughts Then” and then write a new “Thoughts Now” it won’t be so high…