The monthly range continues with a second “Sixth Doctor paired with a sort-of new companion for one story” … story, as The Doctor becomes paired with famed civil engineer Isambard Kingdom Brunel during the time he was excavating the Thames Tunnel with his father. Sounds dull? Well, there are some ghosts… and an alien world connected to London via a bunch of portals… Also, there’s a good story as well! Hooray! Let’s have a closer look then!

It’s London, 1828, and the father-and-son team of Marc and Isambard Kingdom Brunel are masterminding a dangerous project – the digging of the Thames Tunnel. There’s just one problem…

The Brunels’ tunnel is haunted. Every night, a spectral blue lady walks the excavation.

Now, the 22-year-old Isambard, eager to step out of his famous father’s shadow, finds himself dealing with not only the supposed supernatural, but a second unexpected guest – a colourful trespasser who calls himself ‘The Doctor’.

The Doctor (Colin Baker) – The Doctor is once again alone on his travels, randomly settling the TARDIS down in the middle of a rather unpleasant smelling tunnel…. Could be worse, I guess! Worth a stretch of the legs, anyway…

Isambard Kingdom Brunel (James MacCallum) – Isambard is due for great things in his future, but right now he’s just trying to get out from under his father’s massive shadow, and this tunnel excavation could be exactly what he’s looking for… if it wasn’t haunted, that is.

Marc Brunel (Christopher Fairbank) – Marc has a reputation for civil engineering projects that has preceded itself, and lead to him getting the contract to excavate beneath the Thames. Marc has decided to put his son in charge of it, to see if he can handle the pressure…

Flo Hawkins (Becky Wright) – Handmaid for the Brunels, Flo is longing for adventure, but is sure it’ll never happen…

Tan (Catherine Bailey) – Tan comes from another world, one which had windows into London that acted as TV shows. Tan is thrilled to be on the streets that she’s viewed so much… if only it were under better circumstances…

Rispa (Imogen Church) – Rispa and her people are suffering the effects of London’s pollution, despite being in an entirely different world. The only way to stop it? Well, levelling London, obviously… 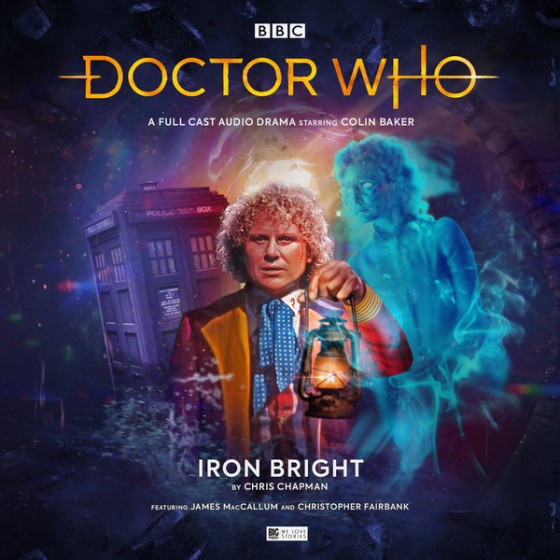 After over a decade of the same design template, behold the first new style Big Finish Doctor Who cover!

Iron Bright works on a lot of different levels. Isambard is a great character, played well by James MacCallum, as he’s got bits of his father’s pro-Britain, upper-class snobbery about him, but he’s also got a more innocent, excitable mind and curiosity that plays off of The Doctor well. The rest of a guest cast is good too, which is obviously a key point to a good story. Tan and her “fangirlish” ways about London, and Flo the old “oh I couldn’t possibly do something so exciting” servant act make for a great pair in the latter half of the story.

The big twist is that the “ghosts” that haunt the tunnel are actually constructs from another world that had become twinned with London.  They actually have a ghost-like backstory, though. In the other world (who’s name escapes me I’m afraid, and as most reviews don’t go into spoilers I can’t see it written anywhere…) when people die they can have their images used for these soldiers called Tributes, that attack their foes while proclaiming “This is for *person’s name*!” It’s an odd idea. A conversation between The Doctor and a Tribute called Elena was great stuff: “I wonder, how would Elena feel about her image being used like this?”  “Elena’s favourite colour was: Purple”  “Yes, what a shame…”, or words to that effect.

This other world and their inhabitants are slowly dying as the pollution caused by early 1800s London is toxic to them, and it began seeping in through the “windows”. The people, specifically lead scientist Rispa, sees this almost like an intentional attack on their world and so she mass-produces Tributes in order to attack London and save her people. When Isambard’s Dad finds out about the world he marches a group of soldiers in to claim it for good old Blighty (despite being born in France, I guess that’s historically accurate, don’t know…), causing a very weird old soldiers vs. ghosts battle that was well brought to life via the medium of sound and acting.

It all comes to a satisfying climax, Isambard and The Doctor’s relationship, Tan and Flo, and the other world (where it is revealed that the portals were a result of an accident from their own people to begin with, so it was sort of their fault anyway…) are all tied up nicely. Nothing left dangling.

I’ve mentioned on this blog how I don’t like the upper-class snobby Brits from Victorian times and I still hold on to that, even if the annoying, over-played stereotypical stuff is kept to just Part 1 and a small bit of 3 and 4.

Also there was something about Flo that made her sound like someone doing an accent rather than a natural sounding one… Though it wasn’t as bad as Marc Brunel’s French accent, which was also very cartoony at times, though thankfully he wasn’t featured as much.

Nothing springs to mind, The Doctor doesn’t even give any in-dialogue clues as to where in his time line this takes place…

Iron Bright is a great story, starts off as a fun historical with The Doctor and Isambard hitting it off well, and then turns into a more sci-fi oriented story with some really well thought out and realised ideas. It’s not quite perfect, but it’s a damn fun story to listen to!