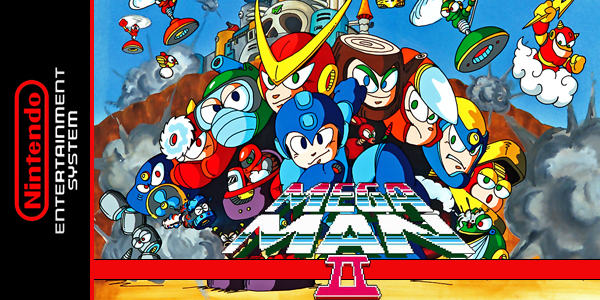 My playthrough of the Mega Man series continues into Mega Man 2, what is often considered the peak of the series. It’s certainly earned its reputation as a classic, both level design-wise and definitely soundtrack-wise! With this comes the conclusion of the Mega Man games I played as a child and couldn’t get very far in, but have now completed (that’s a wordy category…), so let’s get to it! 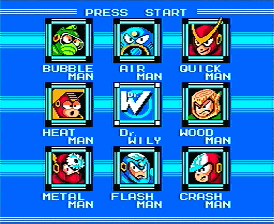 Mega Man 2 was released in Japan (as Rock Man 2) in December 1988, and in the US in June 1989. Thanks to getting the original Mega Man in December 1989, Europe didn’t receive MM2 until December 1990. The game has since been re-released a whole bunch of times, in various collections on many, many consoles.

In Mega Man 2, the titular Man… of Mega faces off against Metal Man (throws circular saws), Air Man (throws tornados), Bubble Man (blows deadly bubbles), Quick Man (is really quick…), Crash Man (has drills for hands… and uses explosives), Flash Man (can stop time, briefly), Heat Man (well… fire), and Wood Man (can produce a leaf shield… of deadly power!!), before running the gauntlet ahead of tackling Dr. Wily, who this time uses a projection of a yellow alien to try and tackle his rival… for some reason. 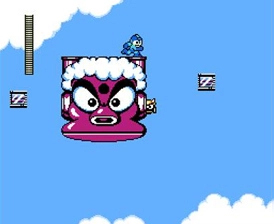 The gameplay remains practically the same. You run, you jump, you fire your blaster. When you kill a robot master you get a new gun based off of their power that has limited energy, and some bosses are weaker to other bosses weapons, making it a fun quest to figure the best way through (or just look it up online…) Again, it’s simple to explain, but tricky to master. The game overall is much easier, mind you, but still fun to go through, the level design and enemy placement is still masterfully pulled off.

New this time are Energy Tanks, which you pick up and when they’re used they restore your full health. You also get special non-boss “weapons” that can create rising platforms, floaty platforms, or jet you sideways across the screen. Also new this time are Passwords! Hooray! You get one after each stage is cleared, and then one before the Dr. Wily run. 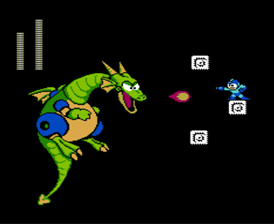 Oddly I did this mini-boss first time… I bet you anything if I had to do it again I’d die.

The graphics are improved, slightly. Mostly in the backgrounds and the enemy sprites, they’re more detailed and complicated, though still obviously 8-bit.

The soundtrack is amongst the most hum-able in all of gaming. So many catchy 8-bit tunes for each level, and some really catchy ones for the Wily stages. It deserves its reputation for having a frankly iconic soundtrack.

Dr. Wiley is back, and now he’s created his own evil robots instead of stealing Lights. It’s up to Mega Man to… well, defeat him all over again. Hooray! 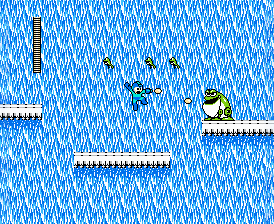 Man, that pixelated waterfall is hurting my eyes!

Back then it was the same story as MM1. I played it, chose a few stages (images of the waterfalls and the big faces in the sky are burned into my head, so I must have tried those a few times) and maybe beat one or two bosses… maybe. But yeah, I sucked, I didn’t own it, so never got the chance to replay it enough to get good. 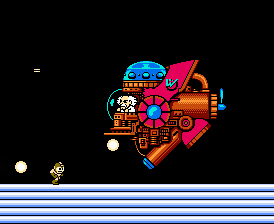 It was around this  time that I thought about taking screenshots… Yep, it took me till the end of the game to remember! All future Mega Man pictures will be taken by me!

Much like with Mega Man 1, I had a great time playing through it in spurts here and there before the big Wily push. Although this didn’t haunt me as much as the original, I do feel much better having personally completed a game so highly regarded. Any little niggle in jumping I disliked in the original was gone (or I just got good enough to not notice, but I’m pretty sure it’s the former) and all that was left was just pure platforming fun. Still highly recommended, but then you knew that already, didn’t you?