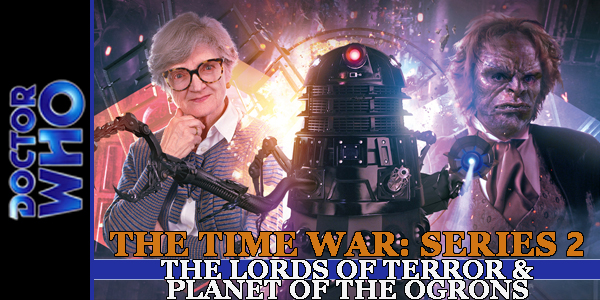 The Time War returns with the second series of Eighth Doctor stories set during the universe-altering period. These first two stories are entirely stand alone, with the first one being quite dark and dramatic, and the second being quite campy and fun (while still being the Time War, so not all laughs, obviously…) It’s a good double bill, so let’s look at them a bit more deeply, shall we?

Official Synopsis (of Planet of the Ogrons):

Avoiding the Time War, the Doctor and Bliss are found by an old acquaintance: the latest incarnation of a criminal mastermind the Doctor knows of old. But unlike her predecessors, the Twelve has a handle on her previous selves’ unruly minds.

There is a mystery to solve involving the Doctor’s TARDIS and its unusual occupant – and answers will be found on the Planet of the Ogrons. 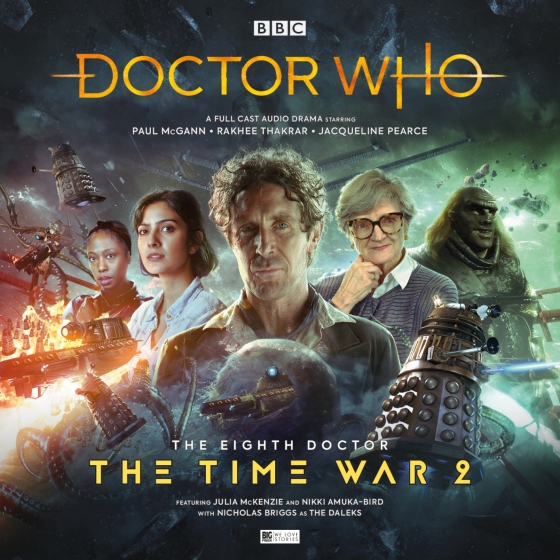 Another spectacular cover, quite busy but not overly so.

The Doctor (Paul McGann) – The Doctor is trying is best to remain impartial in the Time War that continues to ravage the universe. His companion Bliss however is feeling home sick. The Doctor just hopes her home still exists…

Bliss (Rakhee Thakrar) – Bliss was caught in the whirlwind of the Time War before she knew it existed… and then she always knew it existed…? Anyway, after a moment of quiet, Bliss realises she needs to let her family know she’s safe… ish.

Tamasan (Nikka Amuka-Bird) – Tamasan is a Time Lord that is currently stationed on Bliss’s homeworld. She is helping to oversee Carvil’s missile production line, and trying not to think about how he got it running…

Carvil (Simon Slater) – Carvil lost his family to the Daleks, leaving him with nothing but grief and the lust for revenge. Now he oversees the production of missiles that could win the Time Lords the war, but at what cost?

The Daleks (Nicholas Briggs) – The Daleks are in the middle (and a beginning, and an end, all at once) of a war with the Time Lords that’s destroying time and space as we know it

The Twelve (Julia McKenzie) – The Eleven has regenerated, and this older, female body seems to be able to control her other selves… for now.

Doctor Ogron (Jon Culshaw) – A Ogron that thinks he’s The Doctor, or maybe he is the Doctor? He can certainly fly the TARDIS, anyway…

The Dalek Overseer (Nicholas Briggs) – A spin off Dalek, able to think and eat, and generally splice his own DNA with other races. He is putting his knowledge of gene splicing to use in the war, even if other Daleks believe he’s a travesty, a complete disgrace to the Dalek coda of keeping the gene pool “pure”. 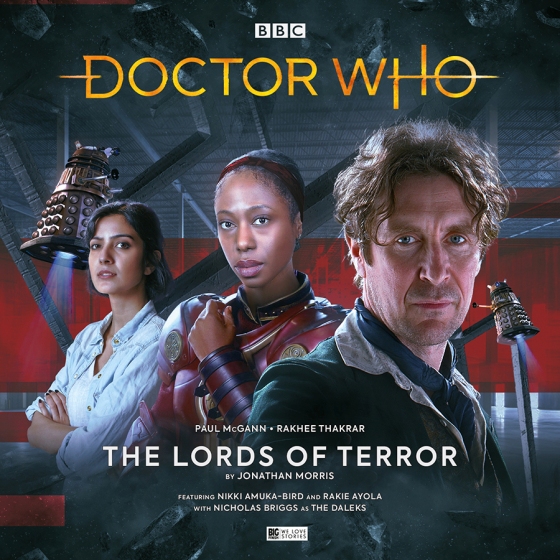 Both stories featured here are good in their own way, which is handy for a set of stories to not feel too samey.

“The Lords of Terror” is a good “no side is innocent” story, where Bliss arrives back home to find everyone living in a dome under constant bombardment by the Daleks. The Doctor meets up with two Time Lords who are watching over the people and their project to create fancy time-based missiles that could win them the war. The unpleasant twist is that there are no Daleks, they haven’t heard of the planet, it’s just grief stricken Time Lord Carvil found out about the material that can create these missiles and so set up a false story and made the people believe they were the last of their kind and making missiles for revenge, while actually keeping them in separate domes from each other to speed the process up.

The other Time Lord, Tamasan, wasn’t aware of this, but she also isn’t too shocked. It all goes a bit tits up when the actual Daleks are told about the planet, and soon a full-scale invasion wipes most people out, including Carvil. Bliss is understandably upset over her people being playthings in a Time Lord scheme, it painting a rather “you’re just as bad as The Daleks!” opinion, one that of course The Doctor shares as well for the most part. That’s why he tries to comfort her with “we’ll do our best to survive”.

“Planet of the Ogrons” on the other hand is a very amusing story, dealing with a still simple-speaking Ogron getting a copy of The Doctor’s memories and believing he’s the next incarnation of the Time Lord. It also has The Twelve, the next incarnation of the great loony character from the Doom Coalition and Ravenous series of Eighth Doctor audios. While I found her a little… underwhelming here, a little too much of a comedy character, it’s probably just setting up audience expectation for when she shows her true colours in the next half of the set, so I’m willing to give it a pass here.

“Doctor Ogron” was funny though, repeating classic Doctor lines and speeches, but with simple Ogron speak. I always liked the Ogrons as comedy henchmen, both on TV and in the couple of audios they’ve appeared in, so I was happy to hear it all again. They play with the idea that Ogrons working for Daleks was never a thing, and that their appearance alongside them during “Day of the Daleks” was a Time War altered version of a previously Ogron free Dalek story, and the Daleks are messing with their own timeline. It’s a fun idea, almost that us the viewer/listener has had their memories of Day of the Daleks altered by the War. The Doctor and The Twelve are eventually saved by Doctor Ogron, but at the cost of his life… until everyone leaves and the Ogron regenerates, showing he got Time Lord DNA along the process. It was a funny scene to end on.

The only real bad was the Dalek Overseer, who was far too over-the-top and campy. I get it was during a very comedic tale, but still… The idea of a rogue Dalek that was splicing DNA and going against the coda is a good one, so it’s a shamed it was ruined by Nicholas Briggs over-egging it. 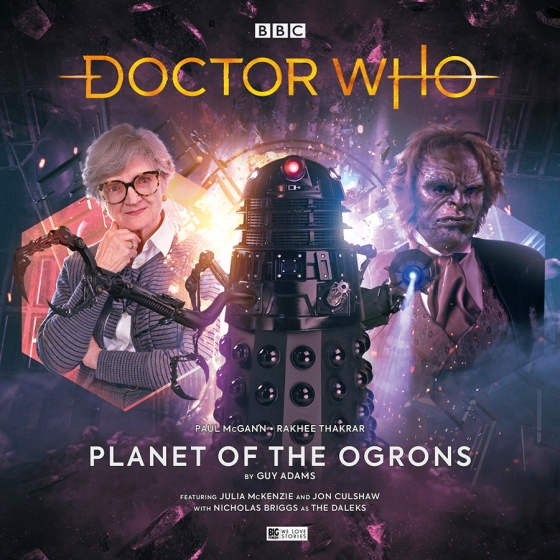 An Ogron in a cravat… That’s what draws my eye. Forget the weird new Dalek Overseer!

Ignoring Time War references and Series 1 for obvious reasons, The Eleven, the previous incarnation of The Twelve, first appeared in Doom Coalition 1. The idea of using people like slaves by lying to them about a war or the fallout of one is the same idea used in 2nd Doctor TV Story “Enemy of the World”, as well as the recent audio “The Middle”.

As for the Ogrons, they first appeared in the aforementioned 3rd Doctor story “Day of the Daleks”, as well as “Frontier in Space” from the same era, a second adventure that is referenced by The Doctor during Episode 2 here.

A pair of good stories, with only a few things to knock it down from a 5 out of 5. Still, a highly recommended start of Box 2, and we’re only half way, so if the next two episodes keep the same quality or better, then it’ll be well worth the £20 it cost!