Sinister cows on the moon! That’s about all you need to know about “The Lunar Strangers”, the next story from Doctor Who Magazine included in the “Land of the Blind” graphic novel. I mean that literally as well, once that core concept has been established, there isn’t really anything else to say about the story… Let’s have a look anyway!

Jeffries is a simple worker on the moon, keeping the first lunar base running alongside his commander Freda. Everything is perfectly normal… except for that pair of space-suit wearing cows. That’s a bit odd… 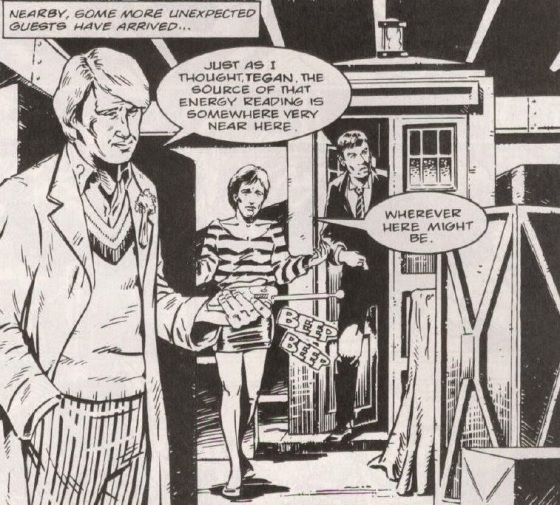 Yikes… trust me, these are supposed to be The Doctor, Tegan and Turlough…

The Doctor (Peter Davison) – The Doctor has arrived on the moon for one simple, and frequently occurring, reason: he’s detected dangerous alien technology where it shouldn’t be. The “enemy” he encounters, however, is anything but frequent…

Tegan (Janet Fielding) – Tegan is a mouthy Aussie who has come to terms with her travelling with The Doctor and their new “pal” Turlough… for now.

Turlough (Mark Strickson) – Turlough once tried to kill The Doctor in order to help his needs, but the key point is: he didn’t! Plus something something Black Guardian etc. Anyway, Turlough and Tegan are getting used to insulting each other while enjoying the wild ride The Doctor provides.

Ravnok and Vartex – A devious pair of aliens from Dryrth, who happen to look like Earth cows. They wiped most of their own race out by unleashing a virus purely because they had gotten too soft, so… a nice pair to know.

Freda Jackson – Leader of the first Lunar Base, Freda is a bit of a hard arse and a more than a little greedy, but she does at least care for her own life… and planet, I guess…?

Jeffries – Jeffries is the only other permanent crew member on Lunar Base 1, and as the handy man he’s had his fair share of earfuls from Ms. Jackson… It’s enough to send you crazy! Like… seeing moon cows crazy… 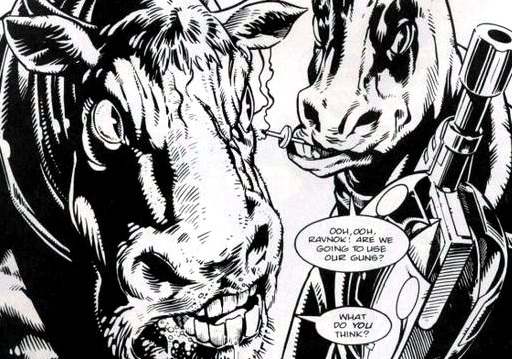 You know, seeing a character smoke is more shocking than the reveal, if I’m honest…

The setting of an isolated moon base is always good, and the two human characters were well presented, if not on the generic side (but given it’s only three issues long, that’s fine). Once again it’s quite brutal, with Jeffries and the … first cow to die’s deaths being quite graphic, not to mention the scenes of the other Dryrth people succumbing to the disease in a flashback. It’s quite at odds with some of the more cartoony aspects of the story, but that was clearly the intention as the whole story is about cute and cartoony turning out to be the opposite.

Yeah… As shown in the characters part of the review, the likenesses are… poor, to put it nicely.

Once you get the one joke that the harmless cows on the moon are actually evil killers who stand up-right, smoke and generally act all evil, there isn’t much to the story… and that wasn’t even that funny (though I knew about it beforehand, so I can’t really comment on its effectiveness when going in blind).

The likenesses are properly bad, there are panels where Turlough and especially Tegan were completely unrecognisable, and in the case of the latter, extremely unflattering. The Doctor doesn’t do much better…

In general the plot is pretty cut and paste, with the aliens trying to get to the base’s power source to blow it up and reach their powerful artefact buried underneath. Like I said, it was like Gareth Roberts thought up the idea of cows turning evil… on the moon, and quickly wrote a story around it and then stretched it to three issues. 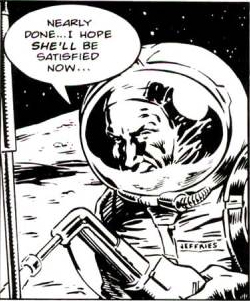 Must have been a pain in the arse to draw the shading in the helmet, yet they completely botched the likenesses of the main crew!

With the exception of the Dryrth making a cameo appearance in DWM 8th Doctor comic “A Life of Matter and Death”, there isn’t anything connecting this story to any other.

The Lunar Strangers is an average story with a central joke premise that doesn’t hold all the way to the end. Combined with some pretty shocking likenesses (though that rest of the art is actually good!) it’s not a great read, really. Ah well…